Famous race cars often have a great story behind them. David Pearson’s 1968 NASCAR Torino is one of those cars. When Pearson scored his first super speedway victory since 1961, the car he drove was purpose built for the track on which he was racing.

For the Rebel 400 in Darlington, South Carolina on May 11, 1968 Holman-Moody prepared a Ford Torino that was specially built to not only beat the competition, but to beat the track itself. They used a Ford 396 ci NASCAR approved motor and a special setup on the Torino to shave 293 pounds of weight off the car. They gambled that the smaller engine would increase the handling in the corners, especially in the late stages of the race when Darlington gets slick from imbedded oil and grease, and to slow the tire wear. Both Cale and LeeRoy Yarborough blew tires during the race and lost time. Pearson took the lead early for the first 18 laps, then laid back like a cat watching drivers lose tires and time. Late in the race he and Richard Petty in a Plymouth fought it out for 50 laps until Petty had to pit. Pearson’s No. 17 went on to take the flag and make Darlington super speedway history.

Click the video window to see a video summary of the race:

The car you see pictured here is David Pearson’s 1968 NASCAR Torino currently for sale in the Cars On Line Race Car Section online.  A Washington state broker is representing the sale for his client in California. It is said to come from an extensive race car collection. Today the car has a big block in it with a set of tunnel port heads. But it still has the trap door in the floor which Pearson used to check his tires during the Darlington race. The seller says it comes with all the original paperwork from Holman-Moody and the dashboard has been signed by David Pearson. This car’s story is so revered in NASCAR history that they made a diecast model of it (see photo at the top of the page.)

This famous No. 17, 1968 NASCAR Torino with the 396 ci on the hood was a purpose built car just for this race. The Rebel 400 was one of 16 Championship wins for Pearson that year when he won his second NASCAR Grand National Championship. For the rest of the year Pearson drove a second chassis, a 427 ci No. 17 also prepared by Holman-Moody. Pearson’s No. 17 Torino qualified on the pole 12 times, won 16 races, scored 36 top-fives, 38 top-tens, in the quest for his second NASCAR Grand National championship. He scored his wins at Bristol, Richmond, North Wilkesboro, Asheville-Weaverville Speedway, Darlington, Beltsville Speedway, Langley Field Speedway, Charlotte, Middle Georgia Raceway, Bristol, Nashville Speedway, Columbia, Bowman-Gray, Asheville-Weaverville, Hickory, and Augusta Speedway.  With so many wins and top places, he out distanced Mopar’s second runnerup Bobby Isaacs by 126 points.

For most of the 1960’s Ford was the dominant manufacturer in NASCAR with Chrysler right behind it with their Hemi cars. Perason was a big part of Ford’s dominance winning three Grand National Championships, 1966, 1968 and 1969.  Ford’s Torino played a big role in those last two championships. The Torino was introduced in 1968 as the sports model of the Ford Fairlane series. Holman-Moody were real interested in the Torino’s aerodynamic roof design with its obvious advantages on oval tracks. They lowered the nose and extended it several inches, and rocker panels were modified to allow the car to sit lower to the ground. 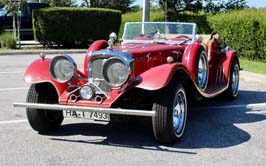