There are so many classic Mercedes 540K roadster reproductions on the market that it is important to note right from the gitgo that this is a real Mercedes 540K Cabriolet.  Next to the Shelby Cobra it is the most copied and replicated classic car in history. This week Gullwing Motor Cars of Astoria, New York has listed a real classic 1937 Mercedes 540K Cabriolet C, an older restoration of the bigger-than-life vintage Mercedes gentleman’s sports tourer. (Tap this link to access photos and history on this venerable marque.) This is the type of vintage motorcar which would raise eyebrows at prestigious events such as the Pebble Beach Concours or the Amelia Island Concours. American buyers will be competing against European collectors for this once-in-a-lifetime opportunity to acquire such an impressive piece of worldwide automotive history. Newsletter readers will remember that they saw it here first.

Gullwing Motor Cars describes their 1937 Mercedes 540K Cabriolet C as “a wonderful older restoration of a very correct numbers matching car.” They say it drives and handles superbly and is quite capable of keeping up with modern day traffic whether on the freeway or on Twisty mountain roads. That is unusual because most of the few remaining examples of the Mercedes 540K have been tucked away in museums never seeing the light of day. They say it remains as originally delivered with the exception of an electrically operated power steering system supplied by the Mercedes factory retrofitted to the car.

Gullwing Motor Cars tells us they have the original factory build sheet and that, according to the buildsheet, their classic Mercedes 540K retains all of its original major components. During recent service work it was determined that all sheet metal and structural wood appears to be original and still in excellent condition. A correct new convertible top was just installed. They say that even the original wood top bows were in such nice condition that they were reused (this was the 3rd top from new.)

The classic Mercedes 540K convertible was delivered when new to a buyer in England through the Mercedes distributor in Brussels, Belgium. Though its early history at this time is not known, in January of 1975 the car was sold through Specialty Car Sales, Inc in Warrendale, Pennsylvania to Margaret B Cowan of Colorado. Recent history is well documented.

The Cabriolet C was an 8 cylinder, 5.4-liter, big-bore engine which was supercharged – the ‘K’ designation stands for Kompressor; its salient virtue was a distinctive note from the 540K’s whinnying blower. Top speed is said to be 105 miles per hour. The car was one of the first to employ four-wheel independent suspension. The Mercedes 540K remains the fastest production road car of its era, and was the last supercharged model Mercedes built until the modern era.

Few cars have created so much interest among collectors as this 1937 Mercedes 540K Cabriolet C.  Mercedes factory records show that only 419 model 540K Mercedes sports motorcars were ever produced.  Of these,  only 32 cars received a Cabriolet C body by Mercedes. Most of the Model C  Cabriolets had a rear body section that was designed with a humped back that was not considered particularly attractive in the day. It appears that only 6 to 8 of the 32 cars received the much better looking slanted back rear coachwork. This is one of them. The Mercedes motorcars were among the most desirable and elegant vehicles of their day. They were constructed of the finest materials available. The craftsmanship is legendary. Most of the chassis received coachwork by the Mercedes-Benz in-house coachworks facility named the Sindelfingen Body Works. They were rare in their day. During the Second World War many of these cars were hidden away along with works of art to keep them from the being confiscated.

This sale will be the buzz in the collector car market this week. It is not often that a vintage car this prestigious transfers from one collection to another. 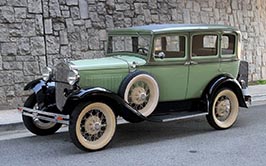