4 Mistakes to Avoid When Buying a Classic Car

Everyone makes mistakes when starting a new hobby. When you buy your first collector car those mistakes can be a hard lesson. John Outen is the force behind Rookie Garage, a website that puts his experiences as a car collector under the spotlight so that you can learn from his mistakes. Like many of us, he had to learn the hard way, but is now willing to share the mistakes he made when purchasing his first collector car.  Here are four mistakes he hopes you avoid on your way to becoming a veteran car collector.

It’s not unusual for a collector to get his dream car home and realize the dream is far from reality. Collector cars can require a lot of work, not just to restore, but also to maintain. Most collectors regard that work to be a rewarding part of the hobby, and it is. But you have to be prepared for it. A common complaint we hear from new buyers is that they can’t take their newly purchased collector car on tour because it just isn’t comfortable enough. The reality is that we’ve grown so used to modern components that new collectors often don’t realize older vehicles don’t come equipped with things like independent front suspension and coil-over shocks, much less  air conditioning, power steering, cruise control, or even windshield wipers.

Outen has listed some things to pay special attention to in his book, “The Rookie Garage Classic Car Buying Guide,” keeping safety, reliability and comfort in mind.

“One pretty consistent area of neglect I’ve been seeing in my price range ($5,000-$15,000) is in the steering and suspension.” He stresses that you’ll want to get photographs of the underside of the car, and ask the seller to take some if none are provided in the original ad.

There’s many more modern convenience and safety features that are easy to take for granted. Turn signals, headlights, a horn, seat belts, air conditioning and more; all contribute to the modern automotive experience. You can see how the reality of being a vintage collector is vastly different from the expectation some beginning collectors may have.

“I overspent. I assumed that all classic cars are worth a lot of money,” is what John said in regards to his own classic car nightmare, a yellow 1971 Dodge Demon that is still sitting on blocks five years after purchasing it. You can see the photo of its current condition in the photo at the start of this article. The seller assured him it could handle the drive home. Despite many of the engine components appearing new, the voltmeter had gone bad and the battery died.

The collector car hobby encompasses over a century of constantly advancing engineering by hundreds of companies, very few of whom kept meticulous records. Even knowledgeable collectors need to spend many hours checking components to make sure they’re correct and original to the vehicle. Once you start talking about custom upgrades and fixes someone may have made to their car in their own garage—well, the possibilities are endless. Even the seller may not know exactly what is going on the car, yet it remains the burden of the buyer to know what it is he or she is buying. In the case of Outen’s Demon, the car had changed hands a few times and the seller didn’t know exactly what had been done to it, and neither was knowledgeable enough to know that the rear end had been replaced with a Dodge truck rear-end. It stuck out too far, causing severe rubbing between the tires and fender, just one more thing that needed to be fixed after Outen brought it home. And it was one more thing that vastly devalued the vehicle.

Have a budget, and understand what you’re going to get for that budget. Don’t be fooled by a glossy coat of fresh paint that could be directing your attention away from a rusted engine bay. Be realistic about what you’re buying, and plan for some of that budget to go toward restoration and maintenance costs.

Realize that decades of an “investment attitude” has convinced many collector car enthusiasts that they can’t lose money on a classic car. Sellers often charge more than the car is worth, and believe they’re justified. Buyers often look past the faults of a vehicle that represents something they’ve always wanted. Step back. Take a breath. And whatever you do, don’t risk …

3. Taking the First Deal you Find

John talks at length about budgeting for a collector car on his blog. In addition to realizing what you’re going to get for the money you have to spend, you also need to realize that you may need to pass up the opportunity to buy that car of your dreams if not all the parts are coming together.

When John test drove the Demon, he noticed a sluggishness in the engine. He didn’t know at the time what that meant, but he decided to take a chance on it. He later found out the problem likely stemmed from the engine heads/valves not being upgraded for unleaded gasoline.  That’s another thing many new collectors will forget to ask about, and an eagerness to be behind the wheel of his first classic car prompted Outen to hurry the sale. This is a common mistake for new collectors. Don’t rush into anything! It’s easy to think one is up to task of making repairs on their own, then realizing the problem is worse than expected. That could mean spending thousands more than you originally planned, letting a project sit for years, or worse, having to admit the car is a complete loss.

Luckily, you can avoid the pitfalls of a lemon collector car by being vigilant and patient. Do your research, get a good read on the seller, take your time, and ask the right questions.

Be sure the car in front of you is right for you, and don’t be afraid to walk away if it isn’t. Don’t let eagerness cloud your judgement, and understand that there are many collector cars to choose from. When setting out to start a collection, you want to find something of value for your first purchase. That can mean a lot of things depending on your budget. It’s your job to arm yourself with as much information as possible before standing in a seller’s driveway and not having any questions left before you leave it.

If you’re considering putting money down on a classic car, chances are you’re part of some kind of collector car community. Maybe you have a parent that spent time with you in a garage. Maybe one of your friends is a mechanic. Maybe you have a co-worker you go to a lot of car shows with. The people you learn from, and the people you talk to when developing a passion for the hobby are all part of your support structure. They’re the same people you should go to with questions about the car you’re thinking of buying, and you should be aware of their experience before you park a classic car in your garage. Outen calls it “tribal knowledge,” and it’s invaluable.

Let’s talk about Outen’s 1971 Dodge Demon again. He knew it had a few things wrong with it from his experience on the test drive, but decided to take a chance with it anyway. Luckily, he had a gearhead uncle who had proven to be a great mechanic and automotive resource. Outen’s uncle is a Ford guy. He knows them inside and out. You can probably see where this is going. A Dodge Demon is not a Ford, and so despite everyone’s best efforts, that Demon is still sitting on blocks to this day.

Part of that value you’re looking for in your first classic car should come from knowing that you have the resources and the knowledge at hand to deal with any problems or issues that may develop down the road. Not only can leveraging the experience of your support structure save you time and money, but it can help enrich the experience of owning a classic car. After all, the hobby should be about more than throwing a tarp over a car in your garage and letting it sit for years until you decide to sell it. Motoring with the people that helped you find your dream car is part of the fun. Keep turning those gears, and maybe someday someone will be leaning on you when they decide to buy their first classic car.

You can read more about Outen’s journey as a rookie collector on his website Rookie Garage, and in his free e-book “The Rookie Garage Classic Car Buying Guide.” He has four more tips for you there, things he learned during his brush with the classic car nightmare and the many years of successful classic car collecting he’s had since. 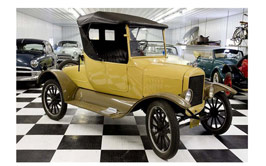