A 1970 Boss 302 W Code Mustang with the Super Drag Pack option is one of the rarest cars we have seen offered for sale this week. The Marti Report says it was one of only seven Medium Blue metallic Boss 302’s equipped with the W Code 4:30 rear gear that year. The reason so few W Code Boss 302’s exist today is because Ford’s advertising for the Boss 302 did not list a Super Drag Pack option.  Many drag racers were unaware that they could get the Super Drag Pack W Code 4:30 rear gear with auxiliary oil cooler on their Boss 302.

Show Your Auto.com, a muscle car broker in Illinois, offers this rare 1970 Boss 302 W Code Mustang for sale. They are representing one of their clients in Massachusetts. They note a 100 percent numbers matching original drivetrain, original buck tag and a Marti Report. (Follow this link to view dozens of photos and contact information.)

The rare 1970 Boss 302 W Code Mustang was built on November 20, 1969 and sold new at North Brothers Ford of Westland, Michigan for an original MSRP of $4,523.45. Shown discretely, it benefits from a concours rotisserie restoration completed in 2010. Consequently, it was taken on the show circuit where it earned two National Concours Gold trophies. It is fully sorted and turn-key ready for the road. It would perform equally on the show tour or at the drag strip.

Of the 6,319 Boss 302 Mustangs produced in 1970, this one was ordered with the best options. They include shaker hood, front/rear spoilers, sport slats, Magnum 500 wheels, close ratio transmission, tach, power steering and power front disc brakes. The original owner threw everything into the package when he ordered this one. Even though Boss 302’s were not technically offered with this option, ordering the “W” code rear axle ratio earned you the rest of the package, auxiliary oil coolers and Detroit Locker rear end.

According to contemporary road tests done by Car & Driver magazine, the Boss 302 completed the quarter-mile in 14.9 seconds at 93.4 mph. It won the SCCA Trans Am Manufacturer’s Championship for Ford in 1970.

This particular Boss 302 might just be the rarest unit out there. The Marti Report says it plainly. It is the only one equipped this way and produced in the Medium Blue metallic color. 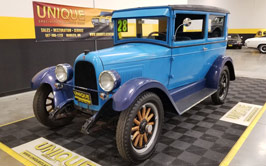