This week,  a 1973 Pontiac Trans Am Super Duty 455 is the featured car in the Cars-On-Line.com newsletter. (Follow this link to view some great photos of the car and the restoration. Be sure to view all of the photos documenting the numbers.) It was listed by Carlyle Motor in Houston, Texas. This one has it all. The pedigree, the provenance and the show quality condition are extraordinary. Follow the ad link to see dozens of high resolution photos of this high quality resored car. In the photos are close up shots of the numbers and tags which prove its “all numbers matching” claim. What’s more, this one is a 4-speed making it one of only 72 such manual shifted SD-455’s produced.

Note the price on the SD-455 Trans Am from Carlyle Motors. Trans Am SD-455’s such as this go for big six-figure numbers when they are factory 4-speeds. That is because there were only 72 factory 4-speed SD-455 Trans Ams ever built. The total production for 1973 was only 252. (There were also 43 factory SD-455 Pontiac Firebird Formulas built by Pontiac in ’73. Of that total only 10 were 4-speed cars.)

This week, Cars-On-Line.com has three more Pontiac Trans Am Super Duty 455 muscle cars posted for sale. After all, we are in the pre-spring market when all the good stuff comes out as muscle car collectors get ready to shake off cabin fever after a long winter. They are all automatics and all are the last year 1974 models. Be sure to check out the 1974 Pontiac Trans Am Super Duty 455 just posted by Hip Rides out of Nashville, Tennessee. (Click here to view the ad currently listed on the Cars-On-Line.com website.) This one is said to be a real “X” Code SD Trans Am with factory air conditioning and original Deluxe interior. At just $56,900, the price is a little lower than the show quality 4-speed car above, mainly because it is an automatic with the 400 Turbo transmission. It came with power steering, power brakes and power windows. It even has the factory AM/FM with an 8-Track. Hip Rides also has a Buccaneer red 1974 Pontiac Trans Am Super Duty 455 (view the ad online here on the Cars-On-Line.com website), another Turbo 400 automatic muscle car. Even though there were more SD-455’s with automatic transmissions than with 4-speeds, these are two of just 731 ever produced. Just on Wednesday, Fast Lane Classic Cars out of St Charles, Missouri also posted a Buccaneer red 1974 Pontiac Trans Am Super Duty 455 which is said to have only 85k original miles. (Find out how much they are asking for this one here.) It, too, comes with the Turbo 400 automatic transmission, factory air conditioning, power windows, tilt steering, power door locks, Rally gauges and power disc brakes. You’ll see they have the window sticker shown in the photos. They say it is numbers matching with correct GH stamped heads, correct LS2 casted intake, correct Y8 stamped block, and L203 date code. The amazing SD-455 big block engine that roars under the hood of the Super Duty Trans Am was a modern era high performance gem the likes of which Detroit had not seen before. Even though it had restricted horsepower and a mild cam, the single Quadrajet Rochester carburetor provided enough power to blow away most of the earlier cars in the muscle car era. At a time when Plymouth Cudas, Corvettes and Chevelles were being de-tuned because of insurance costs and emissions controls, the Trans Am was the only American sports car that continued the muscle car tradition. The TA will always be remembered for its spectacular handling ability. In the post muscle car era, the Super Duty Trans Am with its legendary SD-455 was the only big block car that kept the American dream alive. 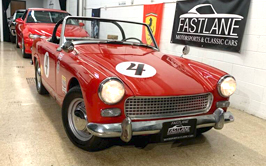