Garroway purchased the pre-owned 1938 Jaguar SS 100 3.5 in 1948, a time when European sports cars were becoming popular here in the U.S. after World War II. Looking for more horsepower, Garroway pulled more performance out of his straight six Jaguar engine by installing a Rootes supercharger. “I blew out this powerplant while tearing off a few rounds at the Studebaker proving grounds,” he reported to Sports Illustrated.  “I guess the old boy just collapsed from over work – it’d been bored to the nth degree.” Along about 1951 he was able to order a more recent XK120M motor with a double overhead cam. Garroway raced regularly at Watkins Glen and other road courses, and also did hill climbs. Today, the 1938 Jaguar SS 100 3.5 Litre Roadster, with chassis number 39067, is available for sale through Gullwing Motor Cars in Astoria, New York. (Follow this link for ad photos and history on the Jaguar SS 100.) They have compiled a volume of history on the car dating back to when it was new. The documentation includes original letters, magazine features and photos from day one. They also have the pre-war and post-war racing history on this car.

Garroway was the original host of NBC’s Today show in 1952. A natural communicator he had a way of looking into the camera and making you believe he was only talking to you. His smooth style and manner was comforting to a national audience which invited him into their homes each morning. He remained the host of the Today show until 1961.

Although he had to give up racing about the time he started on the Today show, Garroway kept the passion for his 1938 Jaguar SS 100 for another two-and-a half-decades. He ordered six alligator skins to upholster the interior of the car. From the photos you can see the alligator leather is still intact.

Jaguar produced just 118 hand built Jaguar SS 100’s with the 3.5 Litre engine from 1938 to 1940. The Jaguar 100 SS got its name from the fact that it would do over 100 miles per hour. In fact, the straight six engine was tested at 125 miles per hour in factory trim. The first versions were produced by the Swallow Sidecar Company, thus the SS designation.

Garroway sold his prized SS 100 to a reknowned Jaguar afficionado, Steve Sim Roberts, of Colorado. He showed the SS 100 regularly at various concours and Jaguar meetings out West as well as running in the California Mille.  The SS 100 instantly recognizable with Mr. Roberts’ Colorado license plate, PIZZAZ. And just like Garroway, Roberts owned the SS 100 for three decades. 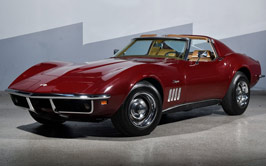