A rare 1970 Dodge Hemi Challenger R/T hardtop has become available for the first time in decades. Our Mopar readers will have seen it at the Mopar Nationals in Columbus, Ohio and at the Wellborn Muscle Car Museum in Alabama a few years ago. And, just to get your blood pressure up, this one is a 4-speed with the original Super Track Pack option. Oh, man, is this a find!

The original Plum Crazy 1970 Dodge Hemi Challenger R/T is being offered for sale by a businessman/collector. He told us he found the car in California and believes there were only four prior owners in the car’s history. It was sold new at a dealership on the Pennsylvania-New York border. After it changed hands it was taken to California where a subsequent owner parked the car next to a shed in around 1974. As the story goes, it stood there for some years. Even today, the owner says there are still just over 33,000 miles on the car.

The current owner acquired the car at the turn of the century and proceeded to restore it to original. “Everything on this car is  basically to spec,” he told us. That is, all except for the Shaker hood. He couldn’t resist hanging a Shaker hood on his newly restored Hemi Challenger R/T. It just looked so good with it on. “It is an original Shaker hood, not a reproduction. But I have the original hood to go with the car,” he noted.

A stickler for originality, the owner put a lot of detail work into the restoration. He said he looked for years to find a perfect dash basil for the 8-track player. He said the body panels were all original metal and were taken off to refurbish and then refitted. This car came stripe delete. It still has the Mopar dog dish hubcaps the way it was outfitted from the factory.

Mopar lovers may morn the fact that there are so few Dodge Challenger R/T’s left in the world. Don’t you wish everybody could own one? But the hard fact is that there were only 286 Dodge Challenger R/T hardtops produced with the 426 Hemi engine in 1970, the first year they were offered by Dodge. The E-Body Hemi R/T was a little longer in wheelbase, and usually came with more options than the Hemi Cuda. But more Hemi Cudas were ordered with 652 produced in that first year of E-body styling.

If you checked the 426 Hemi engine option when ordering a 1970 Dodge Hemi Challenger R/T you also got the factory Super Track Pack option. The Super Track Pack (A34) option is the one with the Sure Grip differential, and 9 3/4″ Dana rear axle equipped with 4:10 gears,  a seven-blade Torque Drive fan, a high-performance radiator with fan shroud and also included front power disc brakes. The regular Track Pack option (A33 code) came with 3.54 gears. Both options only came with 4-speed cars (although there was an upgrade available for the 727 Torqueflite cars.) 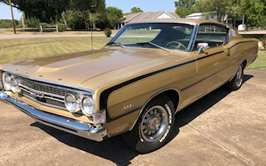