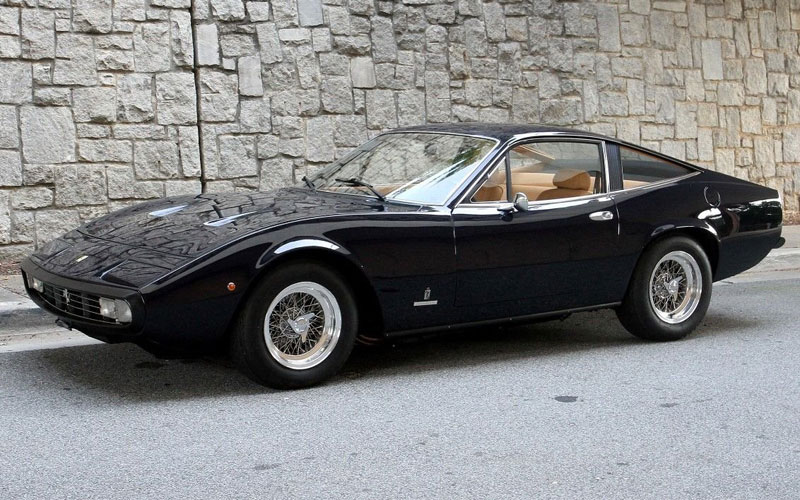 Here is an interesting factoid for Ferrari collectors to consider. Because of the 1980’s TV show, Miami Vice, everyone knows about the Ferrari GTB/4 Daytona models. The Daytona gets a lot of attention from Ferrari afficionados, yet its cousin, the GTC/4 2+2 is more rare, handles better and many say looked better than the Daytona. Yet buyers pay more than twice as much for a Daytona than they do for a GTC/4.

To us that means this 1972 Ferrari 365 GTC/4 by Pinninfarina is a better deal than a Ferrari Daytona. It is being offered for sale by Motorcar Studio, an Atlanta area classic car dealer. (See dozens of photos here in the Motorcar Studio ad online.) They tell us it is ready for touring, rallies and shows. One of only 505 built in 1971 and 1972, the 365 GTC/4 was built on the Daytona chassis. It shares a similar 4.4 liter four-cam Colombo DOHC V12 motor. However, the GTC/4 was a Grand Touring 2+2 with a rear seat. Rather than downdraft carbs such as the Daytona used, it was fed through six Weber side-draft carburetors allowing the hood line to remain a little sleeker.

The block and cylinders on the Columbo V12 4.4L DOHC were aluminum allow with cast iron pressed-in sleeves. It was chain driven with two overhead cams per bank. That means there were four cams which is where the “4” came from in the GTC model name. It has two valves per cylinder.

Motorcar Studio says this is a beautifully restored example finished in as-delivered Blue Ortis exterior color over beige Connolly leather. Now showing only 43,000 kilometers, it was originally sold in Italy through Garage La Rotunda, a noted Ferrari dealer there. It was subsequently imported to the US with owners in New York and Florida. The current owner acquired the car in 2016 at the peak of the craze for buyiing classic Ferraris.

They prepared a video presentation to advertise the 1972 Ferrari 365 GTC/4. Click the video window below to view:

Upon purchase, the current owner commissioned an extensive mechanical freshening which included Ansa exhaust (see photos) and stainless steel headers, brake rebuild, suspension bushings, carburetor cleaning and sync, oil and coolant line replacement, power steering pump rebuild and an air conditioning system upgrade for modern reliability. Prior to his purchase, an engine-out reseal (including head gaskets) was performed by Lamborghini of Houston at a cost of over $15,000.

All GTC/4 Ferraris came with power steering, electric windows and air conditioning. As a carryover from the previous Ferrari GTC model, they also had a four-wheel independent suspension, power steering and self-leveling rear suspension. Fitted with a period Becker Mexico radio, it includes its tool roll and a Marcel Massini history report. Experts will tell you that the proper Borrani chrome wire wheels with Rudge knockoff hubs increase the resale value by an extra $8,000 on this model.

This example is ready for touring, rallies and shows. Although the paint quality and interior are expertly finished, Motorcar Studio tells us it is ultimately a wonderful car to drive thanks to recent refurbishment of often-neglected items. Pininfarina’s beautiful lines make this an iconic example of a Ferrari Grand Touring car. The front and rear seats both fold down manually.

Only 505 of the C4 were produced worldwide, compared to over 1,300 365GTB/4 Daytona models, making this GTC/4 an even rarer find. Back in the day, the GTC/4 sold for $1,000 more than the Daytona. Collectors will tell you the GTC/4 is much more pleasant to drive. They will also tell you that the GTC/4 issues the most distinctive exhaust note of all classic Ferraris.

Unlike the Daytona, the GTC/4 also features two rear seats to make it a 2+2. Although it should be noted that full size adults would be hard pressed to fit in the rear seats. Compared to the Daytona’s transaxle, the 5-speed manul gearbox in the GTC/4 mounts directly hehind the V12 motor. U.S. emissions limited the horsepower to 320 hp on the GTC/4. 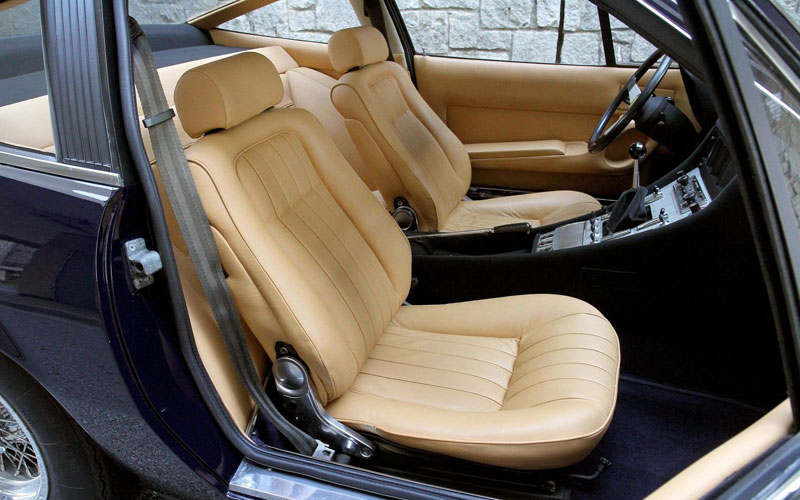