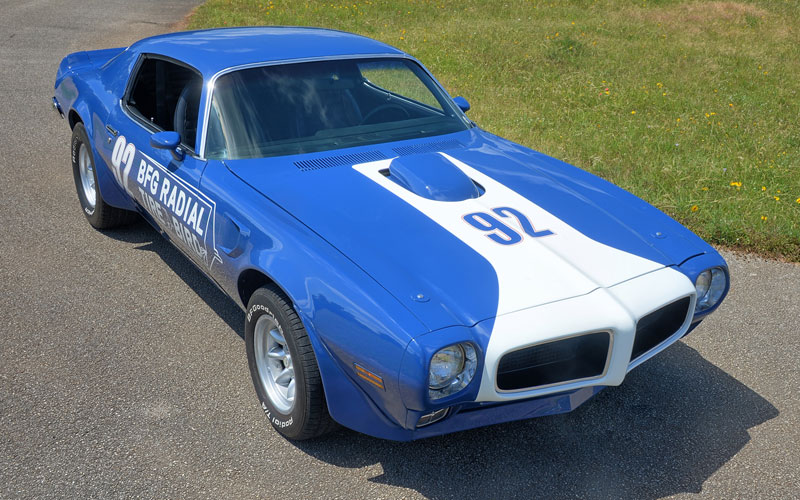 A 1971 Pontiac Trans Am “Tirebird” is being offered for sale by a private party seller from San Antonio, Texas this week. (Tap this link to view more photos.) He says it is one of the six promotional cars built by T/G Racing for B.F. Goodrich that year. (T/G Racing was a partnership enterprise of racers Jerry Titus and Terry Godsall.) They also built three actual race cars for SCCA racing action in 1970. One of them was the No. 92 car with the blue and white BFG color design you see on the ’71 car.

The story went like this. B.F. Goodrich came out with the Radial T/A tire, and they wanted to prove it was an amazing performance tire. They decided that if the street tire could hold up to championship racing in the SCCA, it would be so impressive that it would establish a reputation among muscle car enthusiasts. A blue and white No. 92 was raced by T/G Racing through the 1970 season with the BFG T/A’s. So in 1971, BFG commissioned T/G Racing to build six promotional replicas of the No. 92 car to make appearances all over the country. All six were trimmed in the stylish blue and white design with the No. 92 you see here. T/G Racing built them at their shop in Tarzana, California.

Although the six No. 92’s all came with stock 455 HO Pontiac engines and Muncie 4-speeds, they were extensively modified to resemble the No. 92 which was actually raced in 1970. Stripped of interior and insulation, they all had a racing seat, fire extenguisher, faux fuel cell cover, racing fuel filler on the quarter panel, and lightweight roll cage. They all came with hood pins. The mini-light wheels were wrapped in the BFG T/A’s.

You may have seen one of these cars at your local B.F.Goodrich store or a Pontiac dealer as they were distributed throughout the country in 1971. At the end of the 1971 racing season the promo cars were disposed of, some crushed, some sold to the public.  One car was known to have been sold in Ohio and one in California. Only the California car still is known to exist.

The owner tells us it is the only remaining ’71 Tirebird promotional car. The car has been featured in Popular Hot Rodding, Firebird Times, Car Craft, Muscle Car Review and Petersens Engine Swap. It was purchased from BFG by Tom Senter, editor of Popular Hot Rodding, at the end of the 1971 racing season. He restored the car as a street car and installed a 450 hp LS6 454 engine from Berger Chevrolet. As the story goes, Senter took Zora Duntov for a ride in the car along the Pacific Coast Highway. Duntov said he was impressed with the ride, handling and power. After Senter, the third owner changed the transmission to a 400 automatic for his daughter to drive to school.

The classic Tirebird has spent its life in California and Texas. The seller says it is super clean inside and out, and has been freshly restored. Invited to the 2019 Muscle Car & Corvette Nationals in Chicago, it won the Outstanding GM and Editor’s Choice awards there.

The current owner says he was only ten years old when he read Senter’s articles about the car in Popular Hot Rodding magazine. When he saw an ad on the internet for a “Tire Bird” he knew immediately that it was Senter’s car.

The Texas owner says it is “amazing to drive, in excellent condition, no squeaks or rattles and has been painstakingly restored to its original livery.” The BFG Tirebird has a turbo 400 automatic transmission, 3:42 limited slip rear end, 15×8 aluminum Minilite wheels and P255/60/15 BF Goodrich Radial TA tires. The interior is original with no cracks or tears. The LS6 engine is fed through a Holley 4-barrel, and has aluminum radiator, headers and 3″ exhaust. A Vintage Air system was added in 2019.

3 Responses to 1971 Pontiac Trans Am “Tirebird” Comes With Provenance