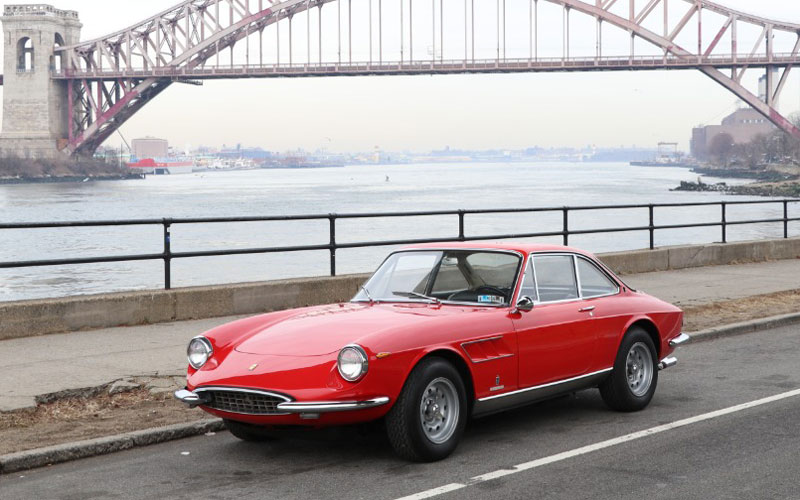 This week another Rosso red Ferrari GTC was listed by Gullwing Motor Cars in Astoria, New York. This one has a ton of provenance. It was ordered new by one of Ferrari’s best customers back in the day. This Rosso Cino red 1967 Ferrari 330 GTC is considered a one-off since it was special ordered by Aristotle Onassis. (Find more photos and information on the ad page here.) The Greek shipping magnate was one of the wealthiest men in the world. He was specific about the distinctive color, Rosso Cina, and an array of bespoke features, including a leather-clad padded dash, leather-wrapped steering wheel, stainless steel rocker panels, and a special front-bumper section protecting the grille.

This classic Ferrari was recently discovered after nearly three decades in storage. It has been restored to running and driving condition. But it remains very original. It still has the  Chinetti-supplied NART badge on the trunk lid and proper Irvin seat belts. The car came factory equipped with air conditioning.  The history on this car was recorded by Ferrari historian Marcel Massini.

Because of its provenance it will hold a value much higher than the average 330 GTC you see at collector car auctions on TV. Gullwing Motor Cars is now offering it for sale at their New York location. Find it among many other classic Ferraris currently for sale in our Cars-On-Line.com Ferrari Section online.

There was perceived to be too wide a difference between the Ferrari 275 GTB with its high performance race type ride and the more refined luxury ride owners experienced in the Ferrari 330 GT 2+2. One thing we know is that Ferrari buyers tend to get what they are looking for. Ferrari’s engineers produced the new Ferrari 330 GTC with special creature comforts in a grand touring fashion. The result was that Maranello built one of the finest grand touring vehicles ever produced, the Ferrari 330 GTC. Those who drove them would as much thrill at the catlike quickness, as they would appreciate the creature comforts. The elegant two seater coupe was designed by Pinninfarina for the 1966 model year. It was produced through 1968.

Ferrari engineer redesigned the 4.0 liter V-12 Columbo engine from the GT 2+2 and transplanted it into the 275 GTB’s 94.5-inch wheelbase. That seemed to create a more refined ride with a sensual feel for the road because of the independent rear suspension and easy steering. After all, it still boasted 300 horsepower. With that shorter wheelbase it is said by experts to be the finest GT produced. Far easier to drive everyday than the race inspired 275 GTB, the 330 GTC became the favorite of many of Ferraris high-end clientele.

Gullwing Motor Cars promises that this 1967 version of the Ferrari 330 GTC will not only perform, but will fulfill the promise of its provenance.