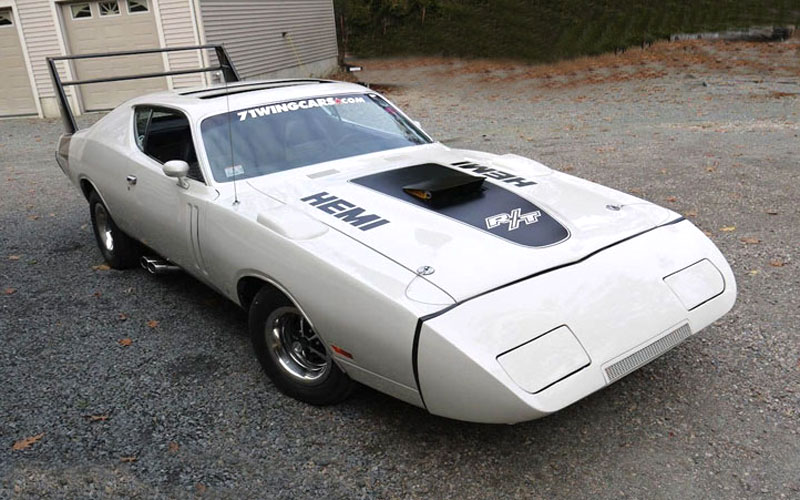 You may have seen these Mopar G-Series Prototypes at one of the big national Mopar events in recent years. The G-Series 1971 Wing Cars owned by “ultra” Mopar enthusiasts Gary and Pam Beineke have been celebrated at shows and in Mopar magazines. Known as the G-Series Collection, as homage to the Chrysler G-Series Aerodynamic Development project for 1971, the Beinekes have the most exclusive prototype and concept car collection any Mopar enthusiast could dream of. These were Chrysler’s dream cars to dominate NASCAR.

When the 1969 Dodge Daytona and the 1970 Plymouth Superbird crashed the NASCAR party they introduced the kind of aerodyamics that would take advantage of high banked super speedways like Daytona and Talladega. Chrysler was the first NASCAR manufacturer to break the 200 mile-per-hour barrier. No other NASCAR driver would qualify a car at 200 mph in a NASCAR event again until 1982. Chrysler had planned production of two aero car variants of their completely redesigned Dodge Charger and Plymouth Road Runner for homologation in 1971. But a restriction in NASCAR rules forced Chrysler to abandon the project.

The white 1971 Dodge Charger Daytona (shown above) was started as a project by the Beinekes. They were helped by Mike Goyette, an expert in Wing Car construction. This 1971 Dodge Daytona Prototype Concept was based on the results of Chrysler’s secret aerodynamic wind tunnel tests and the conducted at Wichita State University between January and March of 1970. At the time, 3/8th scale models were used in these tests. No full-scale models were ever built, until now. The Beinekes worked directly with members of the original engineering team, including Chief Aerodynamicist Gary F. Romberg. What you see here is the optimal configuration according to the official Chrysler 1971 G-Series Aerodynamic Development report and the personal notes kept by Mr. Romberg. (Follow this link to view dozens of detailed photos of the 1971 Dodge Charger Daytona G-Series Prototype.)

Had it gone into production at Chrysler, the 1971 Daytona would have been a completely different car, according to the Beinekes. In addition to the big wing, their prototype has a secondary horizontal airfoil mounted between the vertical stabilizers (see the photo.) In the wind tunnel tests for 1971 models, Chrysler found that the bi-wing design created the greatest amount of downforce keeping the rear end on the ground.

The car is currently equipped with a 472 ci Hemi V8 engine fed by a Six Pack.  It has electric headlamp door motors (whereas the the ’69 Daytonas and ’70 Superbirds had vacuum operated buckets.)

The Beineke’s G-Series ’71 Wing Cars are recognized by Mopar and the aero crew to be the only cars to be correct and accurate representations of vehicles planned for production by Chrysler for the 1971 model year. This car is a testament to what might have been and a reminder of what we lost with the end of the Winged Warrior Era. 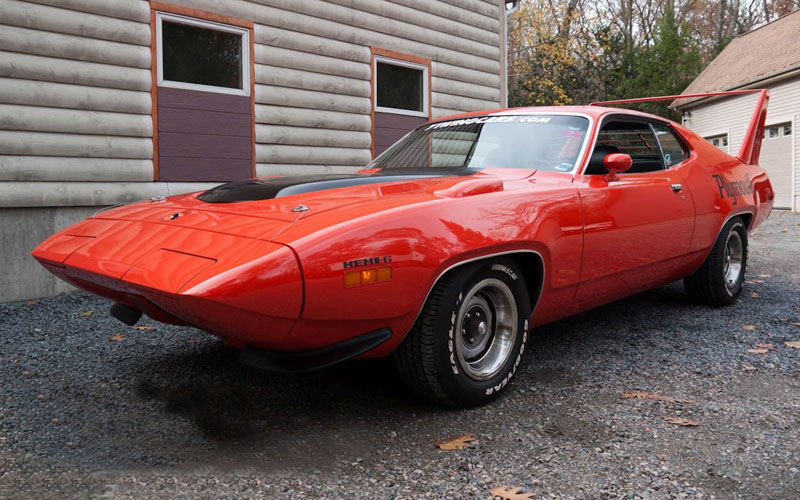 After they premiered the 1971 Dodge Daytona Wing Car at the 2002 Carlisle All Chrysler Nationals, the Beinekes were underway with their second G-Series Wing Car prototype, the 1971 Plymouth Hemi Superbird. The stunning Tor-red Superbird was patterned from Chrysler archive photos of the wind tunnel scale models. Again they used electric headlight doors for the complicated nose cone construction. (Find dozens of detailed images at this link.)

Mike Goyette again built the wing. It comes with a full array of features including electric sunroof, power steering and brakes, and the Air Grabber hood. Under the hood is another 472 ci Hemi with a cast iron cross-bolted main, plus the Six Barrel induction, same as on the Charger.

Richard Petty once said, “The Superbird was probably the best handling car I ever drove …” in a race. A Petty Enterprises entry went on to win the Daytona 500 in 1970, as 10 of the top 13 finishers were racing with Winged Superbirds.

It is the only ’71 G-series Superbird recognized by Mopar and Chief Aerodynamicist Gary F. Romberg to be the correct and accurate representation of vehicles planned for production by Chrysler for the 1971 model year. The G-series fuselage was designed for maximum versatility, with a body which was 250 pounds lighter than the 1970 model. The Beinekes used the historical scale model for a guide and the optimal configuration results from the official wind tunnel testing to arrive at the design you see here.

The Beinekes used Astrotone finish gauge pods and dash inserts in favor of the faux woodgrain originals from Legendary. Thus they created it the way Chief Plymouth designer, John Herlitz intended. The Keisler 5-speed transmission with Kevlar clutch by McLoed makes for crisp shifts. This car remains the only authentic representation recognized by Mopar of what the ’71 Wing Car program would have produced. 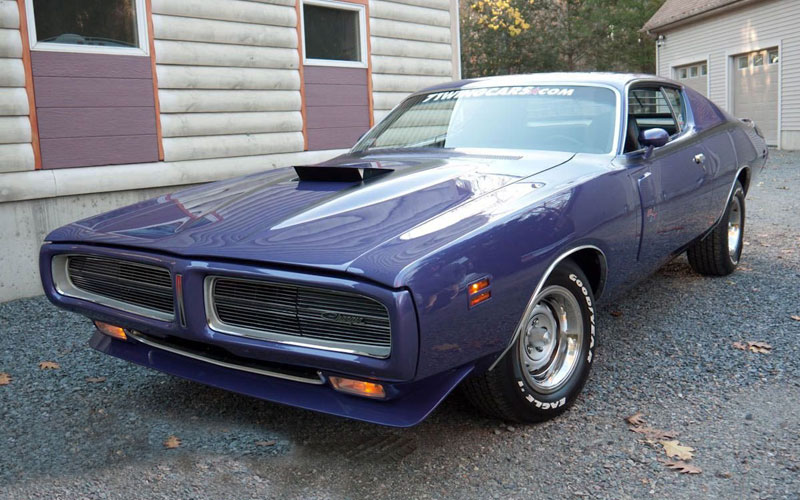 The 1971 Dodge Charger R/T was another G-Series Concept which was designed by Chrysler’s Bill Brownlie. Although the factory production car which Brownlie is credited with was overwhelmingly successful, the factory production model was nothing like the prototype Brownlie had in his head. Only Gary and Pam Beineke could bring his vision to life. (Click here to view dozens of detailed photos.)

Brownlie dreamed of an integrated bumper color keyed to the remainder of the car. The hideaway headlights proudly wore a “Charger” script along the driver’s side door. An Air Grabber hood flap made it to production. The 440 Six Pack engine was given air conditioning to prove that you can stay cool in a muscle car. It also has the popular Tuff wheel, Rallye gauge cluster, Pistol Grip shifter, rear window louvers, electronic ignition and four-wheel power disc brakes.

All of these Mopar G-Series prototypes are made to run hard whether you are on the open road or on a racetrack. They are uncompromising muscle cars in every sense of the word.

All of the G-Series prototypes are currently being offered for sale through REV Muscle Cars in Illinois. The vehicles are themselves are housed in Massachusetts.