It was the most expensive Packard model of its day. The 1936 Packard Twelve Model 1408 Convertible Sedan, with dual sidemounts and wire wheels, made a statement that equaled volumes. Its classic elegance stood as a status symbol both then and now.

A prominent collector car dealer, Classic Promenade of Phoenix, Arizona, is offering this special classic Packard for sale this week. They are representing a large collection from New Mexico. They describe it as a “beautiful older restoration.”  They note that it would be welcomed at any concours event or tour.  Very rare and known to be one of only a few to survive, has been collector owned and is documented back to the mid-1970’s.

The body is by Dietrich, the famous design house of Raymond Dietrich, who also did design consulting for Packard. Dietrich bodied Twelves are considered the pinnacle of classic era Packard design and engineering.  The 1936 Packard Twelve 5-passenger Convertible Sedan was the only standard production Packard costing over $5,000 when new. Because of the price, production was limited. Remember, this was just after the Great Depression and luxury cars were not an easy sale. It weighed 5,945 pounds, making it the heaviest V-12 ever produced.  This one came with a dual cowl style divider window and a large trunk.

The big V-12 is a marvel of engineering and is undoubtedly one of the smoothest running engines ever produced. Everything about the Packard Twelve was designed for a quiet running ride and smooth operation. Packard rated the 473.3 cubic inch V12 conservatively at 175 horsepower. The abundance of torque peaked at 1,400 rpm. Even the Cadillac V16 could not surpass it. Back then they called the Packard the “Boss of the Road.”

Warren Fitzgerald did a road test on a Packard V12 for Car Life magazine and recorded 0-60 in 19.2 seconds and a standing quarter-mile in 21.5 seconds at 63 mph. Remember, the car weighs nearly three tons. Experts will argue that the car could do nearly 100 miles per hour, at least on paper. 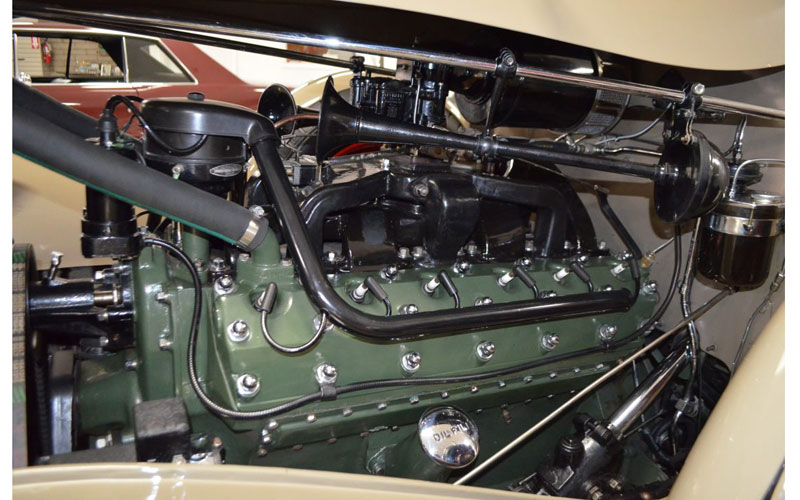 This beautiful 1936 Packard Twelve Model 1408 was well restored and is one of only a few to survive. The livery is complemented by the six 48-spoke wire wheels painted in red with chrome hub caps and Packard’s iconic red cloisonne center medallions. Also adding to its theme, the taupe Haartz cloth canvas convertible top has red trim throughout. The red accents continue throughout, making it elegant and sporty. The massive chrome bumpers with the famous harmonic balancing ends add to the majestic beauty of this convertible sedan. The paint was done in about 1998, in preparation for the 1999 Packard Centennial celebration in Warren, Ohio. The Haartz cloth convertible top was installed in January of 2015. A fully restored matching exterior trunk contains three pieces of matching luggage.

The red leather interior continues the theme of the trim. It was all redone in 2015 and is in excellent condition. The interior wood graining is well done and the wood door cap panels and trim are also well finished. Classic Promenade tells us the instruments are all working well and are restored. The roll-up division window gives the sense of a more formal limousine and the 144 inch wheelbase reinforces this sense of elegance and presence.

Mated to the famous Packard V12 is a smooth shifting three-speed manual transmission. It is apparent that this car gets driven from the engine compartment. The rear gearing is  4.41:1. They tells us it exhibits cool running temperatures and strong oil pressure. The undercarriage is rated as “presentable.” You can see for yourself in the photos. The odometer reads 78,750 miles (they think it is original.) The Packard Twelve is well accessorized including dual side mounted spares with mirrors and covers, Guide Super Ray driving lights, and a flared exhaust turndown tip.

There is more history available on this car.  Click here to read about its former ownership.

A close inspection will find some flaws. The convertible top header and top bow have some paint cracking from use and there is one small crack noticeable in the wood graining paint on the steering wheel, which otherwise is very nice. Classic Promenade tells us it runs and drives very well, but will benefit from rebuilding the steering box. They say they have adjusted the carburetor and brakes while performing their inspection. The radio and clock are not functioning, but the rest of the lights, accessories and instruments operate as they should. 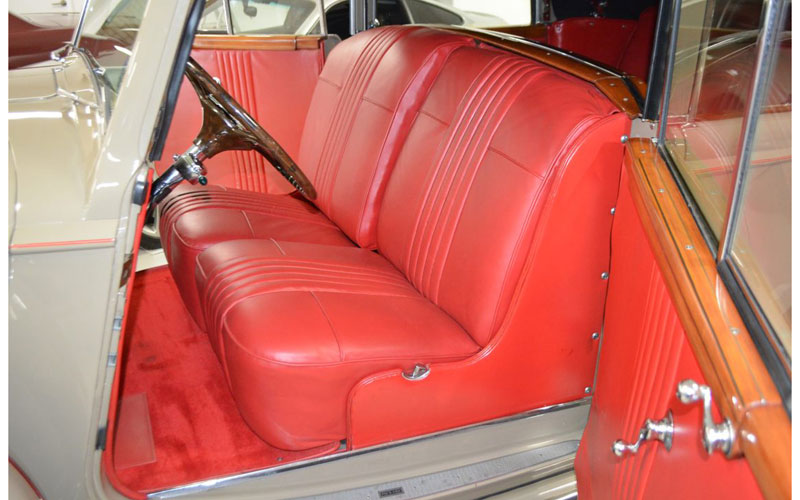 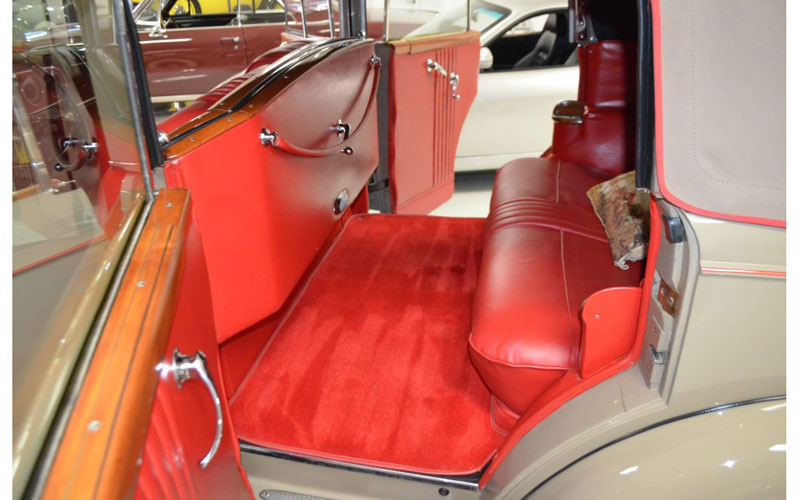