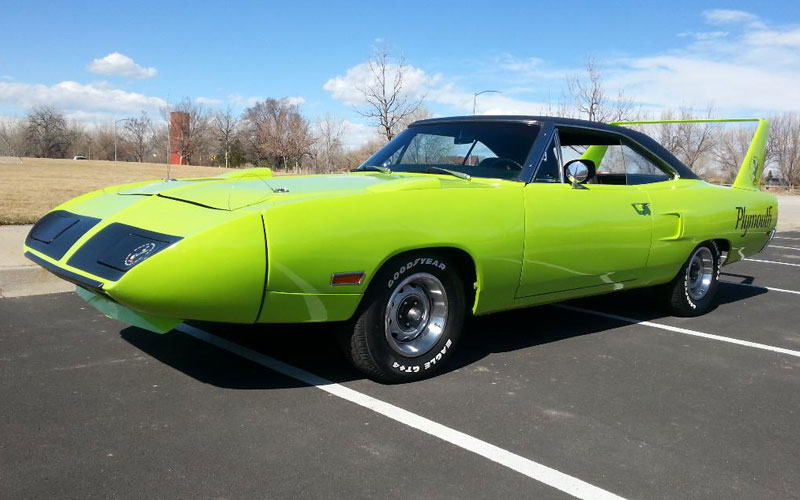 A Limelight Green 1970 Plymouth Superbird with the legendary 440 and a Six Pack is a symbol of Chrysler’s attempt to domnate NASCAR back in the day.

The Limelight Green 1970 Plymouth Superbird symbolizes an improbable story of one company’s “win at all costs” attempt to dominate NASCAR racing. It was in the middle of the “muscle car wars,” the era of American automotive production when manufacturers were locked in a struggle to produce the most popular cars for a young Baby Boomer generation of hot rodders. The most extreme result of the muscle car wars was the “space age” looking Plymouth Superbird.

That sets us up for one of the great stories in this week’s collector car market. A Limelight Green 1970 Plymouth Superbird with a 440 and a 6-barrel set of carburetors has been listed for sale by a private collector from Windsor, Colorado. (Follow this link to view photos and read the ad copy.) It has been documented by Mopar historian Galen Govier as #182 of the Superbirds produced. The owner says it is original and numbers matching, engine, transmission, 8 3/4 rear end and 2:73 Posi. It is one of just 716 Superbirds produced with the 440 Commando motor and a Six Pack.

He says it was repainted in 1999 and remains in exceptional condition. You can see from the photos that the car takes a nice picture. He notes that it drives as a low mileage vehicle should. He says the car has not been abused. It comes with bucket seats, a console, power disc brakes and power steering.

Muscle car collectors will easily pay up to $300,000 or more for an excellent example of one of these Winged Warriors in today’s market.

Fast and low with a rounded nosecone in front, the 1970 Plymouth Superbird had a huge three-foot high rear spoiler (wing) to hold the rear end to the ground. A car that fast wants to get airborne. It was estimated that the Plymouth Superbird could do about 180 miles per hour in street trim. Along with its Chrysler cousin, the Dodge Daytona Charger, the Plymouth Superbird dominated NASCAR for an 18-month period during 1969 and 1970. It is said that they won over 75 percent of NASCAR races during that period.

The story highlights just how much Chrysler wanted to win in NASCAR. Chrysler even pulled a rocket scientist from their federal rocket program with the U.S. government during the space age to help design an aerodynamic car that would dominate NASCAR tracks. By the end of 1969 they came out with the Dodge Daytona Charger, a winged car that looked a little crazy back in the day. But it won most of the late season races in NASCAR that year. They knew they were onto something.

Plymouth was then able to lure NASCAR driver Richard Petty back into the fold because they came out with their own Winged Car version, the 1970 Plymouth Superbird. Petty had abdicated to Ford for 1969 because Ford had come up with their own aerodynamic Torino called the Talladega. But he returned just in time to share in the glory of Plymouth’s finest hour in racing.

For 1970, NASCAR rules required that Plymouth build over 1,500 winged Superbirds for sale to the public in order to enter it in NASCAR competition. Less than half of the 1,920 Superbirds built at the factory actually were sold as new cars that year. Production Superbirds sold new for $4,298, or about $1,000 more than other muscle cars of the era. But it was the extreme racing build that scared away buyers for the street versions that were offered through Plymouth dealers. It was felt that your average “Joe Public” new car buyer was not ready for a “space age” flying saucer like the Superbird.

One of the guys who had something to do with the design wrote in his book that the rear spoiler was raised up three feet high so you could get the trunk open on the car. Another story has it that in testing they just kept increasing the size of the spoiler, and each time they did the times got faster. They finally stopped testing at the three foot height. That became the salient feature of a car that came out of the “space age.” During testing Plymouth noticed the Superbirds were a little faster on high banked tracks where the larger wing held it more stable through the corners and improved lap times.

The sad reality is that the Superbird was just too fast for NASCAR. They were so successful that they were effectively banned from NASCAR competition in 1971. NASCAR president Bill France made sure that winged cars would not be able to compete by restricting the engine size in a winged car. They said they feared the winged cars were too dangerous on most of the tracks. The era of the winged car was over as fast as it had begun.

Today the Limelight Green 1970 Plymouth Superbird in our story commands a legendary place in automotive history. (See it featured in the Cars-On-Line newsletter this week.)