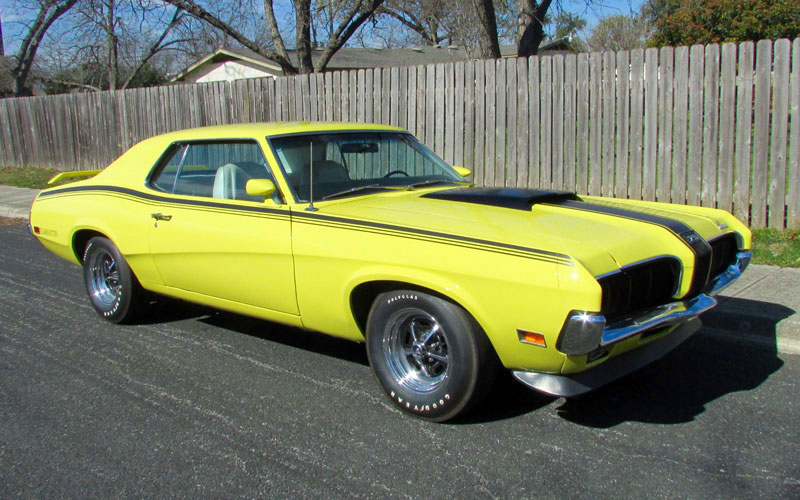 Almost as an afterthought, Ford produced a 1970 Mercury Cougar Eliminator Boss 302 in limited numbers. Without much promotion it almost went unnoticed by the buying public. Yet it is one of the most interesting stories coming out of the muscle car era.

This week a 1970 Mercury Cougar Eliminator Boss 302 was listed for sale by a private seller from San Antonio, Texas. He notes that it is original and has not been restored. (Find more photos here in the ad on the Cars-On-Line website.) It comes with the original high revving Boss 302 engine, 4-speed transmission with Hurst T-handle shifter, and 9″ nodular 3.50 rear differential with 31 spline axles.  Although not restored, it has had the engine bay detailed as well as the underbody.

In addition to being a rare Boss 302 Eliminator, this car has special provenance since it was first purchased by Dr. Kenneth Miles Moser, a reknowned San Diego Medical Center lung specialist who pioneered a procedure that saved hundreds of lives. His work with pulmonary blood clots was acclaimed by the American Medical community. He bought the car when he was in his 40’s. He kept it in the San Diego area for two decades.

The current owner says it is an excellent driving Cougar “that I believe can be driven anywhere in comfort.” He says the engine, transmission and rear differential are all in good condition. “The brakes and front end suspension are sound and the exhaust is good too. The body is straight and it has solid floors, frame rails and torque boxes.” California emissions parts are still in the trunk. All of the gauges , instruments, and lights operate. “The car runs well, shifts well, stops well and is a pleasure to drive,” he tells us.

Of the 2,267 1970 Cougar Eliminators , only 469 were equipped with the Boss 302 race ready engine. The Boss 302 was the top engine configuration offered on the Cougar Eliminator. The impact of the Boss 302 engine from Ford was immediately evident as the Mustang Boss 302’s won the SCCA Trans Am series championship that year, with Parnelli Jones as their top driver.

Ford engineers prepared that Boss 302 engine with special canted valve heads to breath at high RPMs. Their racing performance dominated the Trans Am series in SCCA racing in 1970. The Boss 302 had enormous 2.19 intake valves in the semi-hemi Cleveland style cylinder heads fed by a 780 cfm Holley carburetor. It had a high-rise dual-plane aluminum intake manifold and used mechanical lifters.

Designed first for the 1969 cars, the high revving Boss 302 engine was quicker and faster than the big block 428 Super Cobra Jet. It was designed for Ford’s Mustang, but this special engine was also available in the Cougar Eliminator from Mercury because they were being built on the same production line with the Boss Mustangs. The 6,000-rpm tach in the dash sets it apart from regular street cars.

The Mercury Cougar Eliminator had some extras that even the Mustangs did not have. One visible difference was the name “Eliminator” spelled across the rear deck spoiler. Other visible details that really stood out were the side stripes, black hood graphics, blacked-out tail lights, a blacked-out grille, fiberglass front air dam, and Ford racing mirrors.

The Eliminator name came from the drag racing culture. Top Eliminator was a racing class when Wally Parks first started NHRA. Dyno Don Nicholson always ran Mercury’s and would have the name Eliminator on the side of his cars. The Mercury monicker stuck.

The Cougar Eliminator came in only six special colors all starting with the word Competition. This one is in Competition Yellow. However, any Ford production color could have been special ordered on the Eliminator. It was a California car when new, purchased at Townsend Lincoln Mercury in San Diego.

If you are a muscle car expert, you know the importance of documentation when trying to get top dollar on a special edition Cougar such as this one. It is the key to proving authentication on a car of this pedigree. The seller indicates that this Boss 302 Eliminator comes with three original build sheets. It also has the original owners warranty card and inspection sheet, a copy of the original title, original owners manual and a copy of the Marti Report.