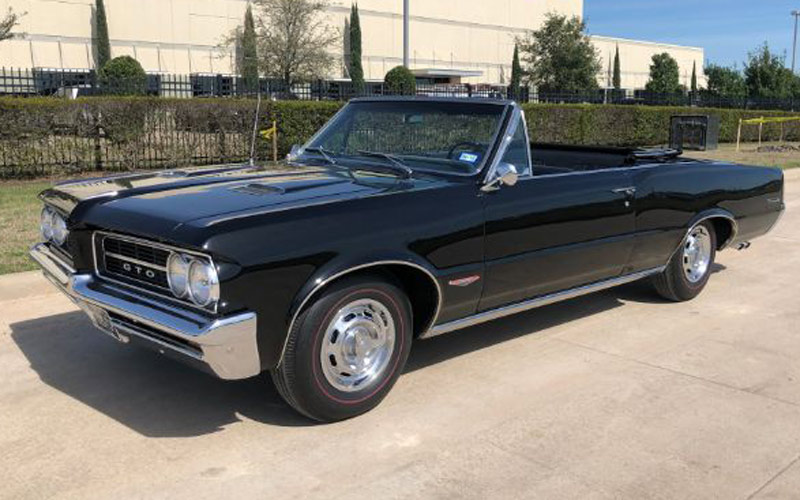 It was the first muscle car. Dream machines like this triple black 1964 Pontiac GTO Convertible changed the way American youth viewed the world. We all saw life through the lens of the muscle car era (even though we never called it that back then.) Pontiac had the audacity and foresite to put a 6-barrel carburetor to feed their 389 ci V8 version of the Pontiac Tempest … the one they would call the GTO (a name stolen from Ferrari at the time.) It was an old hot rodder’s street racing trick. Pontiac put a factory Tripower carb setup in the GTO and the muscle car era was on.

When this 1964 Pontiac GTO Convertible was listed this week we knew we had to feature it. Haggle Me, a classic car broker in the midwest, is selling it for one of their clients. (Follow this link to view photos and ad description.) This was the car that sparked a revolution at a time when the Baby Boomers were coming of age. The GTO was the first of a generation of factory built high performance sports cars (now refered to as muscle cars) coming out of Detroit.

It is rare since it came from the factory with an A-1 Midnight Black finish and a black interior. What makes it special, though, is the premium engine package with a 389 ci V8 and three 2-barrel carburetors. And, yes, it was ordered with the factory 4-Speed transmission. The engine is the correct 76X Block with a date code of E234, meaning it was built on May 23, 1964. The M-20 transmission is original to the car also and has the VIN on the top of the transmission where it meets the motor. The ragtop looks to have been changed to black for that cool triple black look. This “Goat” also has power steering, power top, Safety Track rear end, Red Line tires, a factory console and optional padded dash. The private seller says it runs “as good as it looks.”

Pontiac executives John Delorean and Jim Wangers were thinking outside the box when they came up with the idea for the GTO. They were offering a factory built hot rod that would capture the youth market. That leap frogged Pontiac into the top position at Gernal Motors.

Pontiac conservatively estimated that they would sell about 5,000 GTO’s that first year. They actually produced 32,450 units, or over six times that estimate. And it was affordable to the average Baby Boomer of the era. The base Pontiac Tempest went for about $2,557. You could turn that into a GTO by ordering the special GTO package on the Tempest/Lemans model for just an extra $295. (Today the value of the Tripower alone is $3,000 to $5,000,) Only 6,644 Pontiac GTO convertibles were produced at Pontiac Motor Division in its first model year. Only 8,245 of these had the tripower carbs. The rest had four-barrels.
Production numbers for the GTO two-door sedans (sometimes called “pillared coupes”) were 7,384, while PMD also built 18,422 of the popular hardtops. 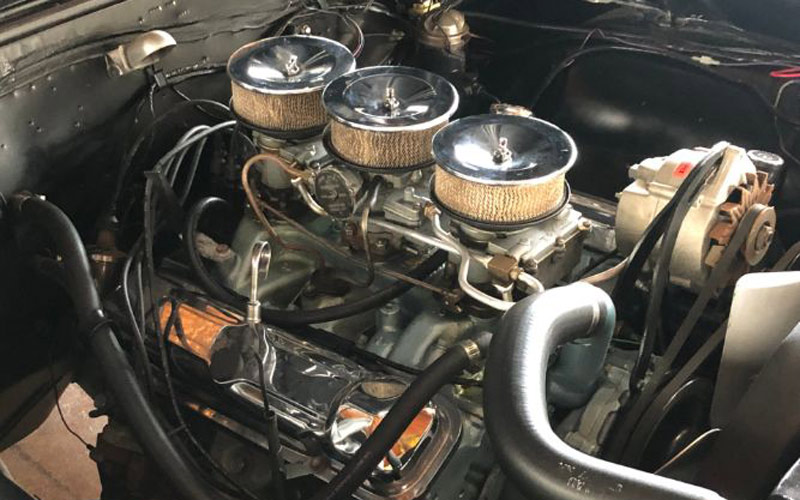 HOW THE GTO WAS BORN

Pontiac bean counters had a ban on racing after 1963. They restricted intermediate sized cars to engines no bigger than the 330 ci V8. But Chief Engineer John Delorean with the help of Pontiac’s General Manager Pete Estes, found a way around that limitation. They knew there was a big Baby Boom generation coming of age. Hot rodders at heart, they saw the need for performance cars at an affordable price. They invented the GTO package which could be added to the Tempest/Lemans model. The GTO package used the 389 ci V8 engine, thus skirting the rules.

Bill Collins and Russ Gee, engineers at PMD, were smart enough to realize the feasibility of bolting the 389 ci V8 engine into an A-body Tempest. And the A-body was more conventionally engineered to accept the high torque. It was perfect. It could use the solid rear axle and four-link suspension required. With the GTO’s heavy duty suspension in place, this car could handle well even with the big car performance power plants.
It is said that Delorean coined the name GTO. He pretty much stole it from Ferrari. The Italian “Gran Turismo Omologato” meant a Grand Touring car certified for FIA racing.

The GTO was marketed by Jim Wangers at Pontiac’s ad agency, MacManus, John & Adams. He did an enthusiastic job of promoting the GTO’s performance image. While the execs at Pontiac scoughed at Delorean’s claims that they would sell 5,000 units in 1964, PMD actually sold over six times that many. Their success sent every automotive manufacturer in Detroit scrambling to imitate the GTO.

What made the Tripower option were three Rochester 2-barrel carburetors on a dual-plane intake manifold. The car ran on the center carb only most of the time. But if you stepped on the throttle the two outer carbs would open when the center carb was two-thirds open.

This black 1964 Pontiac GTO Convertible is featured in this week’s Cars-On-Line.com newsletter. Click here to see the feature story.