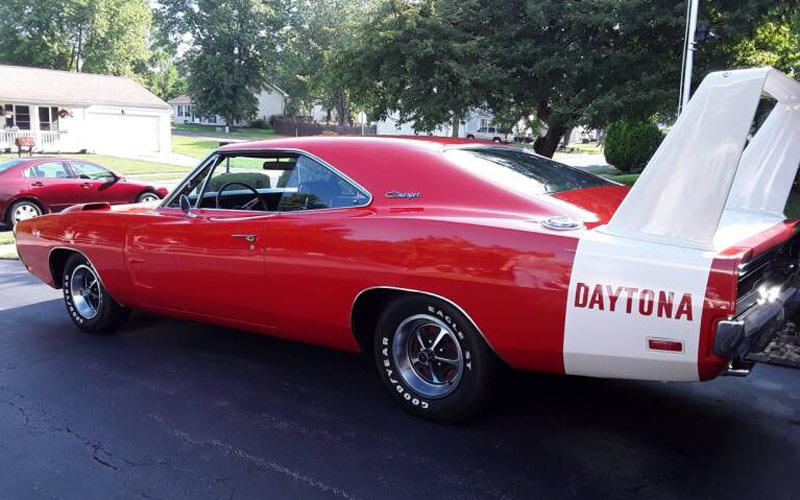 In an era when aero technology would dominate NASCAR racing, this B4 Bright Red 1969 Dodge Daytona Charger was a winged warrior with few equals in automotive history. Back then there was no way we could have known how valuable these cars would become in the collector car hobby today. But the original Dodge Daytonas are now even more valuable than their Plymouth cousins, the Superbirds.

A poster child for the golden era of Detroit, the Charger Daytona stands head and shoulders above nearly every classic in terms of looks, exclusivity and performance. This week, the 1969 Dodge Daytona Charger was listed for sale by Eric’s Muscle Cars out of Maryland. (Find a photo gallery and ad description on their website.) This car was featured in a six-page layout in Muscle Machines magazine in 2016. At that time the seller told about how he could not bring himself to sell the car. So this is the first time it has been for sale in over 40 years.

Everything about this Daytona is rare. With matching numbers front to back, it comes with an original build sheet. The all original body panels make it one of the most desirable muscle cars on the planet. Looking at the driver’s view of the dash, there is the tic-toc-tach to the driver’s left with the speedomter center. It has power steering and a woodgrain steering wheel.

And does it ever have provenance. This B4 Bright Red 1969 Dodge Daytona Charger was purchased by Don Butler, the owner of Perry Raceway in Perry, New York. At the time, he used the visually dramatic Daytona Charger as the Pace Car for his race track. With the 18-inch nose cone and a huge wing which stood 23 inches off the deck, the car was spectacular enough to make it interesting. But Butler further enhanced it with a gaudy race track themed paint job. The car was so well known that Greenlight Collectibles made a 1/64th scale discast of it, calling it the Perry Raceway Pace Car. 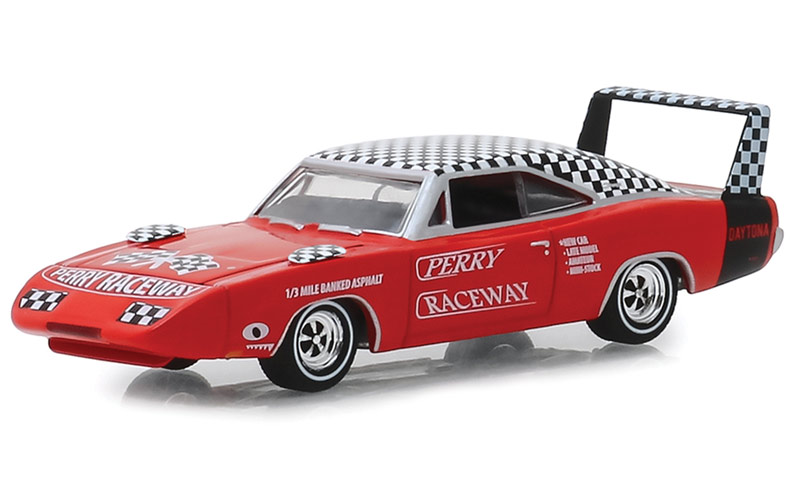 There were just enough Daytona Chargers produced in late 1969 to homologate them for NASCAR competition in 1970. Of the 503 which were produced, they say 433 came with the 440 big block Dodge Magnum V8 engine. But it is believed that very few 440 Daytonas still exist with original engines.

When the 1969 Dodge Daytona and the 1970 Plymouth Superbird crashed the NASCAR party they introduced the kind of aerodyamics that would take advantage of high banked super speedways like Daytona and Talladega. Make no mistake. These were purpose built race cars. Chrysler was the first NASCAR manufacturer to break the 200 mile-per-hour speed barrier. NASCAR driver Buddy Baker broke the 200 mph barrier during time trials at Talladega Speedway in Alabama, March, 1970, with a top average speed of 200.447 mph. No other NASCAR driver would qualify a car at 200 mph for a NASCAR event again until 1982.

The sad reality is that the Dodge Daytona and its Chrysler cousin, the Plymouth Superbird, were just too fast for NASCAR. They were so successful that they were effectively banned from NASCAR competition in 1971. NASCAR president Bill France made sure that winged cars would not be able to compete by restricting the engine size in a winged car. They said they feared the winged cars were too dangerous on most of the tracks. The era of the winged car was over as fast as it had begun.

Since Dodge made only the number of production Daytonas as necessary for homologation under NASCAR rules there were never that many to sell to the public. That was probably okay, because they were so over-the-top with the huge wing that most new car buyers were scared off by the appearance. Few cars were as popular as they were polarizing, and that simply adds to its cache. Today collectors can’t get enough of them.

The 1969 Dodge Daytona Charger is the featured car in this week’s Cars-On-Line.com newsletter. Be sure to click through to the newsletter to find out what’s happening in the collector car market.