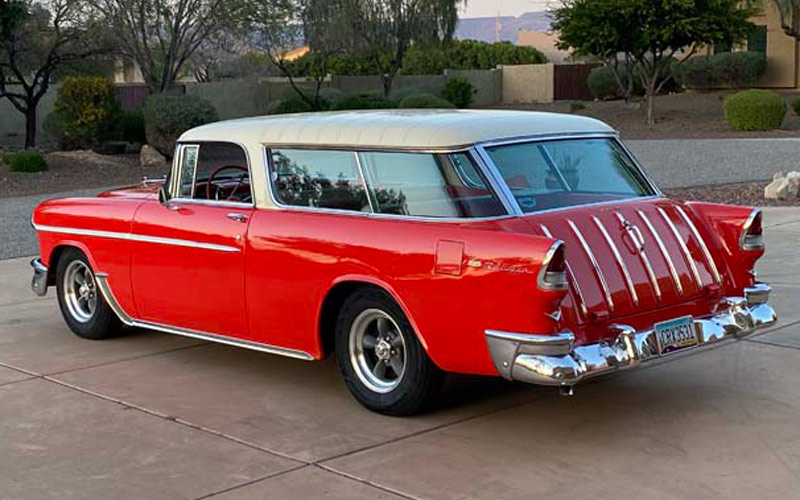 Along came the 1955 Chevrolet Bel Air Nomad Wagon amid an era of car hops on roller skates at the local drive-in as doo-wop music played on the radio. It is hard to imagine now, but back then the automatic transmission was just at a stage where it was considered reliable and Chevrolet was introducing the small block V8 engine. More than that, it was an amazing time in American life where the automobile was more a cultural theme than a mere mode of transportation.

This week an Arizona collector is selling his 1955 Chevrolet Nomad in Cars-On-Line’s photo classifieds under the Nomad Section. (Click here to view dozens of detailed photos.) The private seller says it is an excellent running and driving car. It comes with an original license plate and its original California title. He says it has excellent paint, # 615 Gypsy Red over Shoreline Beige, and now has a replacement Ciadella interior, done in Trim 544, Red and Beige. It does have a 265 ci V8 rated at 160 horsepower and automatic transmission. It was restored over the last eight years, frame on, with original body panels. The photos tell the story.

What has been updated on the car are the disc brakes with drilled slotted rotors, and a set of American Torque Thrust wheels and radial tires. The Nomad was lowered 2 inches front and back, and it sports Grille guard, Fender guards and finger nail guards. It has the Desert Cooler radiator upgrade as well.

So, What is a Nomad?

When Chevrolet showed off a Corvette station wagon during the 1954 GM Autorama the idea was a big hit. What’s not to like about a two-door hardtop sport station wagon? You see, it was back in the 1950’s when Harley Earl had the idea of creating a two-door station wagon for a post-war American new car buying public. Earl was General Motor’s chief of design. They ended up calling the wagon a Nomad when it went into production. It was based on the top-of-the-line Chevrolet Bel Air.

I’ve often wondered how it came to be that this concept became so popular, or what Harley Earl saw that made him think people would take to it. After all, the 1955 Chevrolet Nomad did not sell exceptionally well as a new car. But today it is genuinely revered by car collectors. The problem with the Chevy Nomad was the price. At $2,571 apiece, it was the most expensive Chevrolet passenger vehicle produced (save for the Corvette.) Chevrolet was a little disappointed that they only sold 8,386 Nomad wagons that year, even though it was rushed into production at mid-year based on its popularity in the GM Autorama series. Sales continued to decline for ’56 and ’57.

No matter. Today the 1955 Chevrolet Bel Air Nomad is one of the most sought after collector cars on the planet. Just post a picture of one on Facebook and you’ll get over 1,000 likes. It was far more popular as a used car than as a new vehicle. It was also perfect for generations of long-boarders who made up the West Coast surfing scene.

It should be remembered that the 1955 Chevrolet was a benchmark new design. They sold 1,704,667 passenger cars that year. It was a new era and Harley Earl’s designs made Chevrolets look better than most high end cars of that era. Some said they should have cost more. It was also the first year for the new small block Chevrolet Turbo Jet 265 ci V8.

The two-door Chevy Nomad was a sporty styled wagon with Corvette power. It was based on the Chevrolet Bel Air platform. No wonder it appealed to a younger generation of Baby Boomers. The Bel Air was Chevy’s featured passeger car for ’55, with special carpeting, extra chrome, and richer interior fabrics. The Nomad shared the same interiors.

Continuing the two-tone interiors from ’54, Chevrolet went all out to make the 1955 stylish and almost elegant. The egg-crate grille was an omage to Ferrari, and some interesting options were available for the first time in ’55. One was air-conditioning which was being offered as an option on the Bel Air and Nomad. The rakish look of the Nomad is its most endearing quality. With its hardtop styled door and the sloping B-pillar, it has a most unusual look from the side. The roof is fluted and it has wraparound rear side glass. The real wheel design uses a cutout look. The rear seat folds down to create more cargo space. Then there is the unique back door which was divided horizontally so the top half would swing up and the bottom fold down. 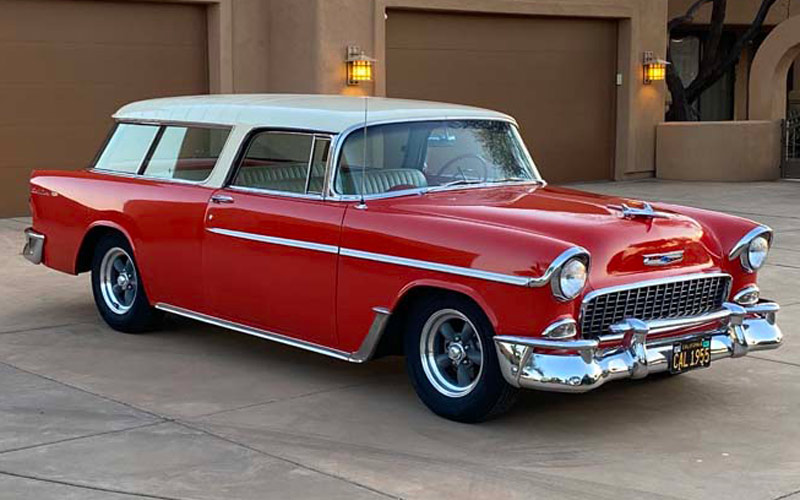