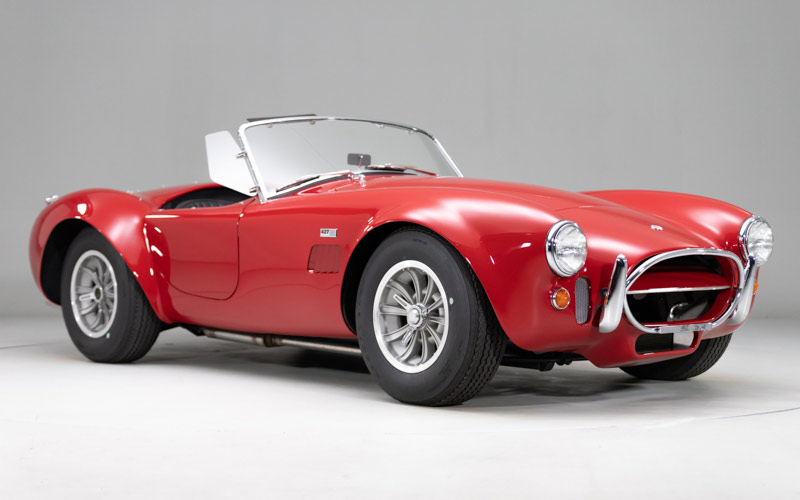 The history of the Shelby 427 Cobra is storied and the potential they brought to the world racing scene was monumental. Even though their unbeatable power and thundering presence was never fully exercised on race tracks, the potential they represented has aroused the interest of generations of sports car lovers and collectors. They may be the most desirable “dream cars” on the planet.

Carroll Shelby was a larger than life personality that raced harder and lived life bigger than most people ever dreamed. Maybe that was from being born and raised in Texas. Race car driver, businessman, entrpreneur or showman, Shelby just did it better than anyone else. For those that knew him, he was the savviest marketing manager and promoter that ever lived.

As a race car driver he won Lemans in 1959, but shortly after that he found out a heart condition was going to force him to stop driving. When he could not longer drive the cars, he decided he would build race cars his way. He took a British AC Ace body and transplanted a Ford 289 V8 motor into it. All this was done with the help of his friends from the California hot rodding community. The Shelby 289 Cobras won the U.S. Manufacturer’s Championship three years in a row, 1963, 1964, and 1965.

But by 1964 Shelby and his team were aware that the maximum power they could get out of the Ford 289 in this Cobra body style was around 385 horsepower. Ken Miles, Shelby’s ingenius driver and mechanic/engineer, figured they could put a big block in the Cobra. When Ford began making the big 427 ci V8 for NASCAR, they reconfigured the Cobra body and suspension to accomodate the 427 Ford engine. They even put coil springs at all four corners. Although they had some help from Ford, all of this was coming together at lightning speed. Shelby was also becoming involved with Ford’s GT-40 racing program.

When it came time to certify the new 1965 Shelby 427 Cobra Competition cars for FIA they failed to produce enough cars for homologation. Enzo Ferrari may have had a hand in the FIA’s decision. There was suspicion to that theory. But no matter. Shelby American won the hotly contested 1965 FIA World Manufacturer’s Championship with their 289 Cobras anyway. It always left the question mark though. What if the Shelby 427 Cobra models had been certified. What would they have been like in FIA competition? The world will never know.

Only 343 original CSX 427 Cobras were ever built, including the Competition cars. They were numbered from CSX 3000 to CSX 3360, built from 1965 through 1967.  While 53 cars were produced for Full Competition in FIA, another 31 were re-purposed for Semi Competition (S/C) and 260 were produced to sell for street use to the public. Of the street Cobras, about 100 were given Ford’s 428 Cobra Jet engines. The other 160 cars came with the thundering big block 427 Ford side-oiler engine. 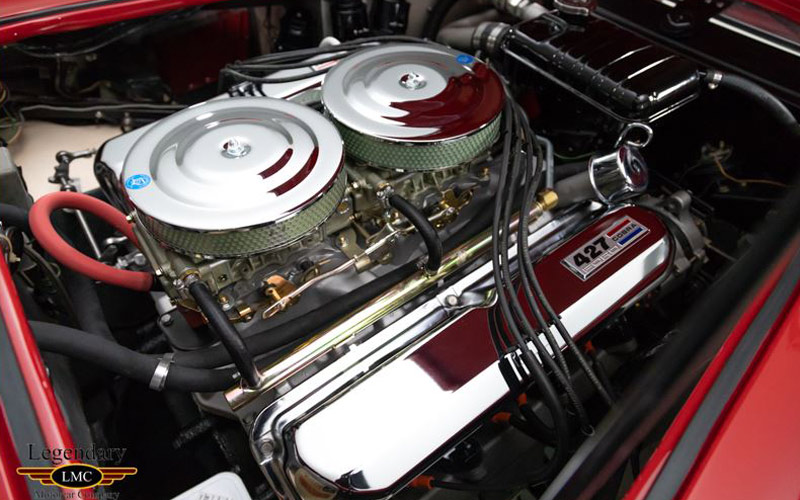 This week, Legendary Motorcar Company listed a 1966 Shelby 427 Cobra for sale in the Cars-On-Line Shelby listings online. (Follow this link to review the posting and see dozens of detailed photos.) The car has a history of important owners giving it the provenance worthy of a Shelby 427 Cobra.

Billed to Shelby American on 10/27/1965, the Shelby 427 Cobra was ordered new at Levittown Motors in Levittown, New York. A couple months later on February 2nd, 1966 it arrived at the dealership, via Airfreight to J.F.K. International, in the same livery it appears today, Red with black interior. The first known owner was John Levitt whose family had built the town (Levittown, NY) named after them. It was then sold by Levitt in 1972 to Jim Alter in La Mesa, California. It was listed for sale in 1974 and then purchased by its next caretaker, Greg Schneider from Long Beach, CA. A year later Frank Brown from California purchased this Cobra and restored it. In 1985, it was sold to Mr. Keith Harvie (Agora, CA) who owned it for four years before selling it to George Poteet, a noted collector from Memphis, Tennessee. In a rare turn of events, it was repurchased in 1996 by Keith Harvie who retained ownership until Legendary Motorcar Company purchased it in 2013.

Legendary Motorcar performed a cosmetic restoration on the 427 Cobra to the condition you see it in here today. Showcasing its correct original livery of stunning red over black interior with the beautiful clean factory delivered look, with a full under-car exhaust.  The 427 engine is topped with a factory dual quad setup as was the case for the first run of real 427 cars. It still makes a thunderous noise which cannot be mistaken for anything but a factory built 427 Cobra. The factory style Sunburst wheels are wrapped in Goodyear tires as delivered new. This is as close as you get to the way an original Shelby Cobra was delivered new.

Few collectors will ever get the opportunity to own such an authentic piece of American history. Usually cars such as this pass between large car collections without ever being offered in a public sale. 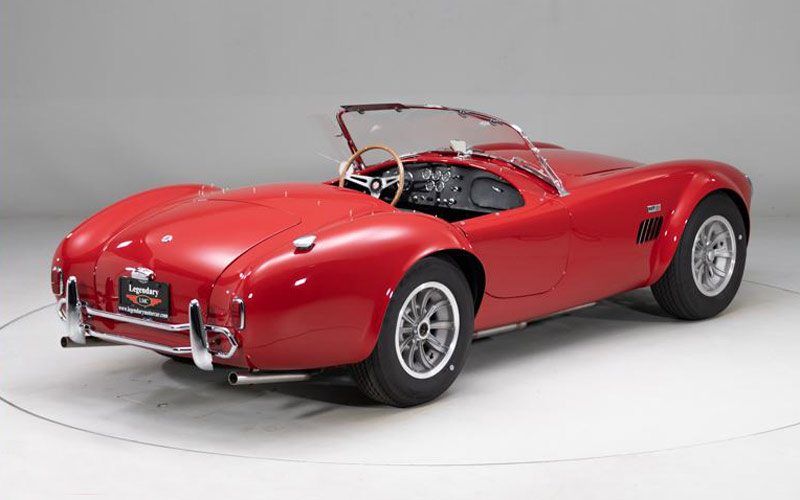