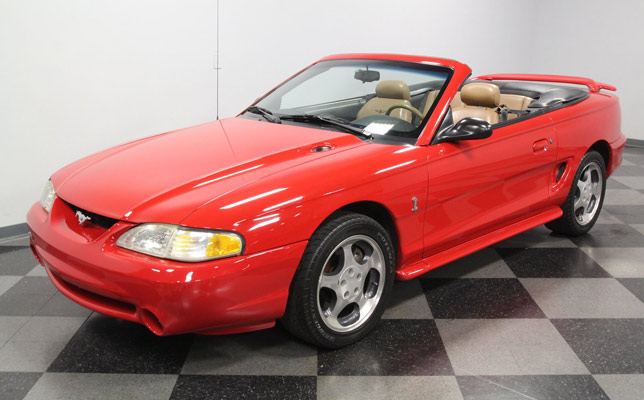 Today a highly desirable 1994 Mustang SVT Cobra Indy 500 Pace Car was announced as one of the top deals on the internet this week. Cars-On-Line.com has selected it as its Deal of the Day for later next week.. The Covid era seems to be causing some interesting repercussions in the collector car market.

Remember when these were brand new? I remember watching the Indy 500 in 1994 when the SVT Cobra was the official pace car. This is a dealer edition 1994 Mustang SVT Cobra Indy Pace Car Convertible. (Find dozens of detailed photos on the Streetside Classics ad page.) They picked the Mustang as the Pace Car in 1994 to celebrate the 30th Anniversary of the Mustang. It was a brand new design that year and styled by SVT. The one you see here is without the decals but they tell us it has the unused Indy 500 decals in the box and comes with the sale. What a find! This one is being offered for sale this weekend by Streetside Classics in Charlotte, North Carolina. What a find for a collector. Only 1,000 dealer sold Indy Pace Car editions were produced by Ford that year. You can own this one now. It will be our  Deal of the Day on the internet later in the week if it lasts that long. The asking price is only $14,995. Hurry!!!

Each week Cars-On-Line selects bargain priced collector cars currently being offered for sale in their Deal of the Day feature in their newsletter. The preview gives you first shot at all the cars that will be highlighted in the Deal of the Day feature on the Cars On Line desktop/laptop home page. Often these cars sell in the newsletter before they even make it to the home page. But you will always find them first in the newsletter. Click here to review all of the Deals of the Day for the coming week.