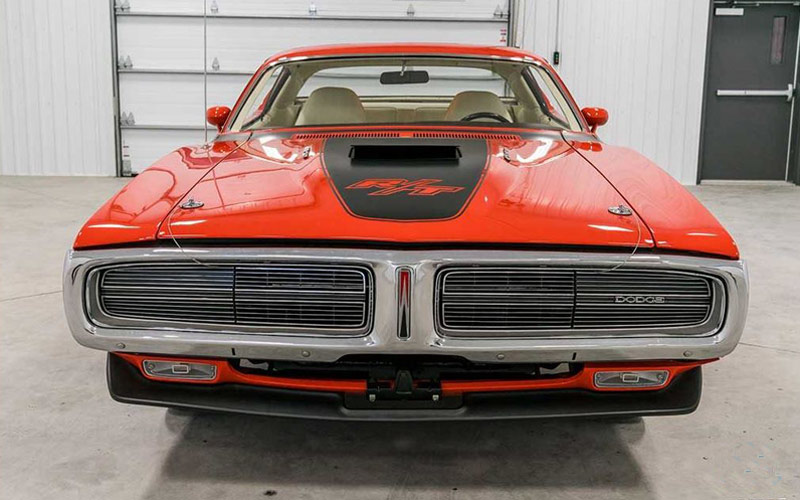 That’s why, when a 1971 Dodge Charger Hemi R/T was listed out of Canada this week we knew it would get noticed on the Mopar forums. It was listed for sale by MPR Motors in St-Lambert, Quebec, Canada. (Find dozens of detailed photos here on the ad page.) And, yes, this is one of the very few B-Body Hemi Chargers built for Canada. Records show that only 63 Hemi Chargers were built in 1971 for the U.S. market. And another 12 were produced for Canada. This is one of the Canadian models.

MPR Motors tells us it is a real R Code Charger Hemi R/T in Hemi Orange with a white interior. In addition to the 426 Hemi motor, it comes with a 3-speed Torqueflite transmission, 8 3/4″ rear end with 3.55 gears and 15-inch Magnum wheels. It has undergone a complete OEM restoration by a Mopar afficianado who was really passionate about the car. He said it took seven years to research and then restore the car. You will find that it has all the factory markings as if it just came off the assembly line at the plant. The Torqueflite automatic transmission is original to the car. The engine is a 1966 block rebuilt with 1969 and 1970 heads and 1969 carburetors.

According to Galen Govier, a Mopar historian, all R/Ts received a blackout louvered performance hood, special door skins with simulated air extractors, and Rallye wheels. The extra cost to order a 426 Hemi engine at the time was $833.55. Every Hemi car had to come with the Sure Grip differential.

1971 Hemi Chargers also had a vacuum-operated hood scoop with an actuator on the dashboard. That brought cold air straight to the twin Carter AFB 4-barrel carburetors.

Up until 1970 the 426 Hemi was hard to keep in tune which made some Mopar owners opt for the 440 big block.  In 1971, however, Chrysler solved the problem by giving the 426 Hemi engine hydraulic valve lifters, keeping the engine in tune and making it more reliable for the street. Quater-mile times were still in the high 13’s at over 100 mph.

MRP Motors says this Hemi R/T must be seen to be appreciated. They have extensive documentation including ownership history and records for the work done by each owner, plus restoration invoices. What a find. The last of the B-Body Hemi Chargers.