Based on the success of the Shelby Mustangs and the California Specials, Ford came out with a Mustang Mach 1 Twister Special for the Kansas City District in 1970. It was practically a full-out race car. Their intent was to draw more interest in the Mustang among performance minded buyers.
Ford encouraged regional programs to increase Mustang sales in the late 1960s and early 1970s. They offered the very popular Mustang in several regional “special editions”. In 1970, Ford dealers in Kansas City got together to produce a Mach 1 derivative called the Twister Special.

You won’t find them on the open market very often. But this week Flemings Ultimate Garage in Rockville, Maryland has listed a 1970 Ford Mustang Mach 1 Twister Special for sale. (Follow this link to review high resolutions photos.) At the time of this reading, they are still researching the car and going through the copious documentation and paperwork. Their Mustang Mach 1 Twister Special was actually sourced from their local community in Maryland. The ad is so fresh that the descriiption has not yet been written. The current title was issued in 2016 and shows 43,525 actual miles at that time. Flemings Ultimate Garage is currently taking pictures of all the numbers on the car to publish in the ad next week. As rare as it is, it is entirely possible that the car will be sold before they can publish the photos. Keep watching their ad page.

The rare Mach 1 big block is currently listed in Terry Fritts’s Twister Special Registry. It came with power steering, and power front disc brakes. One Twister restorer says they never came with Magnum 500 wheels but they are often photograped that way. Flemings tells us the paint is mostly original, and “it really looks nice.”

All of the Mach 1 Twister Specials were supposed to come with the 428 Super Cobra Jet big block motor (R Code). However, due to an engine shortage that year, only 48 came with the 428 CJ’s while the rest were given 351 M Code motors. They all came with Grabber Orange paint with Twister logo and black trim. All had black interiors. Each engine was blueprinted and came with performance options, i.e. the Drag Pack option with 3.91 geared Traction-Lock rear axle, functional Ram Air Shaker hood, dual racing mirrors, hood tie-downs and a tranny cooler. All had competition SCJ suspensions and Deluxe bucket seats. Half of the SCJ’s, 24 of the Twister Specials came with 4-speeds, the other half with the C6. Of the 351 M Code Twister Specials, nine came with a 4-speed and 39 came with C6 automatics. The rear shocks were staggered.

A race track promoter, American Raceways International, requested 1970 Mustang convertibles for use as pace cars and limited editions. Ford’s Special Promotions Division created unique side stripes and graphics for the program. Unexpectedly, AMI went bankrupt before they were able to take delivery on all the cars. But Ford was able to offer the distinctive trim design to the Kansas City sales district when it was planning their Twister Special program. (The story that some of the pace cars were converted to Twister Specials is false.) The “Twister” name was a reference to frequent tornadoes that happen across Kansas and the Midwest. All of the Mach 1 Twister Specials were numbered consecutively.

On November 7, 1969, Kansas City, Ford dealers from the Kansas City District assembled for a “Total Performance Day” at the Kansas City International Raceway. There, for the first time, the Twister Special Mach 1’s, Torinos and Rancheros were all on display. Dealers, salemen and parts specialists were all invited to participate in an afternoon of drag racing and road course runs. Bob Tasca was on hand, as was the Ford Drag Racing Team. 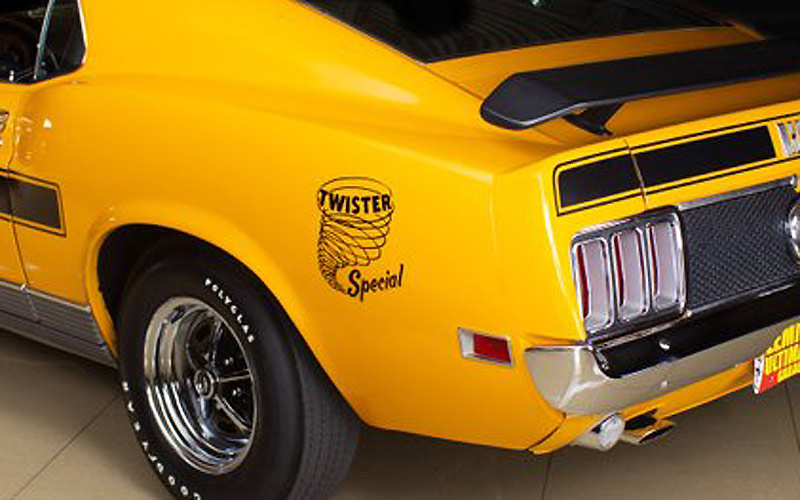