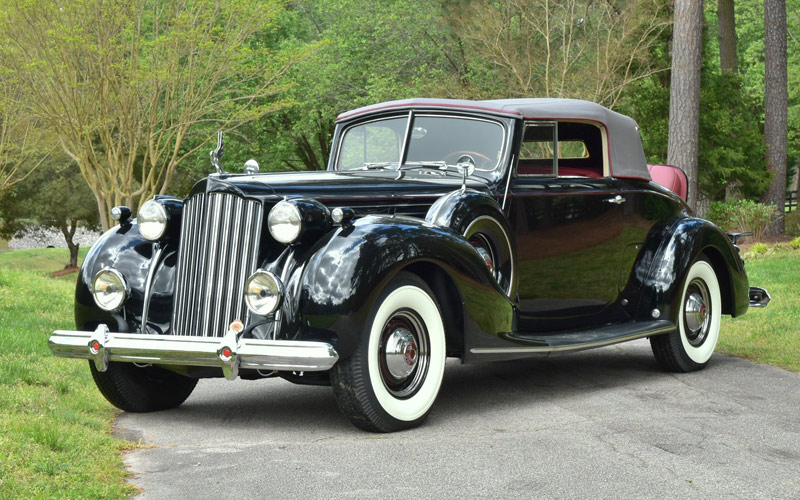 A 1939 Packard 1707 Coupe Roadster has appeared in the Packard Section of the Cars-On-Line.com website. It is the symbol of a great American brand that may have peaked in popularity as the era of long-wheel based classic motorcars came to an end. The 2/4 passenger roadster marks the end of the Packard Twelve period. It is the rarest of the V12 Packards evidenced by the lowest production numbers for Seventeens (a Packard insiders term that refers to models 1707 and 1708 long wheel based Packard Twelves.)

The rare example you see here is this week’s promo car for the Raleigh Classic, an upcoming Collector Car Auction being held August 21-22, 2020 in Youngsville, North Carolina. The Packard 1707 Coupe Roadster will be the featured car on Saturday, August 22, to cross the auction block at the Capitol Auto Auction in Youngsville. (Follow this link to view more photos and auction information.) This is the first year the Raleigh Auction will be held at the Youngsville auction facility. Cars-On-Line newsletter readers know that the Raleigh Classic is one of our favorites.

When the 1939 Packard 1707 Coupe Roadster was produced it had one of only 446 V-12 chassis built by Packard Motor Company in Detroit that year. This example is powered by a 473 ci V-12 engine and a 3-speed transmission with a fast geared rear end. It was restored in 2012 and was judged as both a Junior and Senior AACA Award winner. Its features include hydraulic brakes, independent front suspension, a rare burled walnut steering wheel and a rumble seat with correct leather arm rests. It is often referred to as a “2/4 passenger” coupe roadster because of the rumble seat.

The Packard Twelves were produced from 1933 until 1939. By the latter year, the demand for long-wheel based chassis on which coach builders would construct custom bodies was waning. 1939 was Packard’s lowest production year for the 1707 and 1708 chassis.

It was in 1939 that Packard celebrated its 40th Anniversary. It had become a proud American automobile company, regarded as one of the most respected automotive manufacturers in the world. Historians might rightly regard 1939 as marking the apex of Packard’s popularity and influence.

They were the iconic looking long-wheelbase motorcars, some of the largest and most luxurious big bodied classics ever produced. The Packard chassis was made available to the country’s top coach builders to build upon. These cars were almost all one-off because of their infinitely customizable coachwork. In 1939, the Packard Model 1707 Coupe Convertible weighed 5,540 pounds. It was the year that Packard would offer an optional column-shifted manual transmission.

Vacuum-assisted hydraulic brakes and even a vacuum-assisted clutch made for easy, light operation. So, while the Packard Twelve offered here is a big, luxurious motorcar, it drives easily and corners lightly.

Packard offered eight different body styles on the long 1707 chassis in 1939. Total production of 1707 and 1708 chassis by Packard fell to 446 units. A 1707 could cost between $4,140 and $6,730, a price so out of the ordinary that even Packard’s wealthy clients were looking for more economical transportation.

The L-head twelve cylinder engine displaced 473.3 cubic-inches and offered 175 horsepower. It had a three-speed selective synchromesh transmission with floor-mounted gearshift controls. A column shift was available as optional equipment, as was a push-button radio, burled walnut instrument panel, and many other options.

Today these cars retain a high value among collectors. According to a website called Concept Carz.com, the highest prices paid for 1939 Packard Model 1707 V12’s peaked in 2016. But more of them were sold in 2019 than any other prior year. 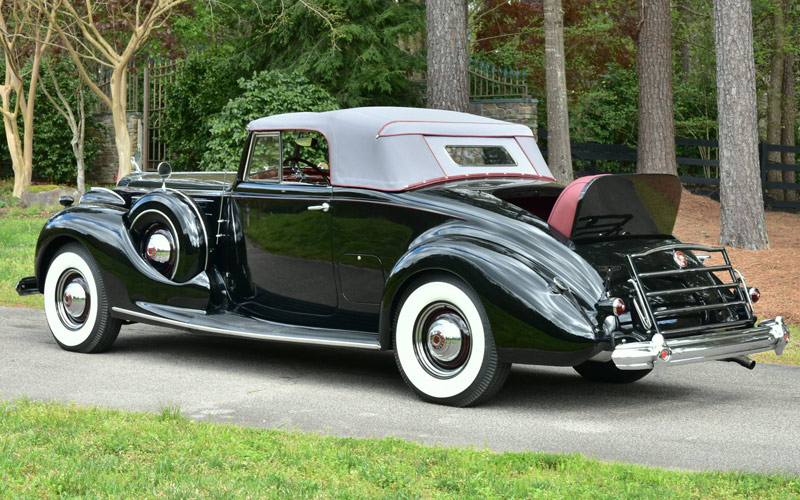