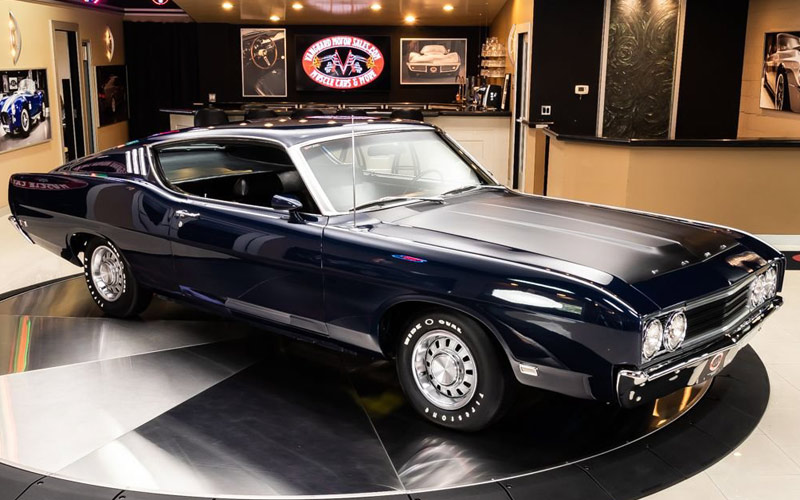 For a fleeting magical moment in history, the Ford Motor Company was on top of the world when they campaigned their 1969 Ford Torino Talladega in NASCAR competition.

Ford literally lit up the NASCAR super speedways in 1969. Aerodynamics made their Talladega so fast that even Richard Petty was lured away from Chrysler to drive for Ford that year. The Talladega was only produced in the early months of 1969 at Ford’s Atlanta, Georgia plant. Due to homologation rules, Ford was required to produce a certain number of them for the new car buying public. There were only 750 of these Torino Talladegas homologated for NASCAR that year. It remains one of the rarest cars to find from the muscle car era.

This week, our friends at Vanguard Motor Sales in Plymouth, Michigan have a very special Presidential blue 1969 Ford Torino Talladega for sale. (Follow this link to see dozens of high resolution photos of the entire car.) Back in 2015, Phil Holbrook, considered the “Father of the Talladega” at Ford, awarded this car the President’s Award at the Ford Nationals. Presidential Blue is one of only three colors the Talladega came in, and it is the most rare of the three. You probably have never seen one before.

One of the photos in the ad shows the odometer. Take a look. There are only 64,736 miles on the car. This Talladega has been rotisserie restored and is sporting a beautifully straight body, 14” wheels, Firestone F70-14 Wide Oval tires, Competition Black painted hood and rear tail panel. Under the hood they say you will find a numbers matching Ford 428ci Cobra Jet V8 engine with a Holley 4-barrel carburetor. Power is sent to the rear tires through a numbers matching Ford C6 3-speed automatic transmission and a Ford 9” rear end. It is said to have the 3.25 gears and an open differential. With power front disc brakes and power steering they say it cruises with ease.

Every Talladega that was produced came off the line with an interior featuring Bench Seating and Black Vinyl and Cloth Upholstery. This Talladega is still sporting the original seats and they look amazing! Take a look inside to see the rest of the beautiful interior! This ’69 is also equipped with beautiful Gauges, Seat Belts all around, Black Carpeting, AM Radio, along with a spare tire that’s mounted in the nicely restored trunk!

The underside of this Talladega looks amazing like the rest of the vehicle. You’ll want to place a set of mirrors underneath this ’69 at your local car show to display the beautiful condition of the Floors, Bracing, Pinch Welds, Rocker Panels, Fuel Tank, Fuel and Brake Lines, Brakes all around, Rear End, Driveshaft, C6 Transmission, Engine Oil Pan, Leaf Spring Rear Suspension, Independent Front Suspension, along with the New Dual Exhaust System with a Crossover Pipe that sounds great thanks to the V8 up front!

Watch this beautifully done walk-around video on this 1969 Ford Torino Talladega by Greg at Vanguard. He’ll take you for a test drive and show you the undercarriage.

Ford Motor Company’s 1969 Ford Torino Talladega was the first aerodynamic factory production car to be homologated for NASCAR competition. Although Chrysler’s Dodge Daytona Charger and Plymouth Superbird get all the attention from collectors today, it was the Talladega which took the honors as an actual NASCAR champion.

The 1969 Ford Torino Talladega was so successful in NASCAR that it won 29 Grand National races during 1969 and 1970. David Pearson won the NASCAR driver’s championship in 1969 campaigning Talladegas, and Ford won the 1969 Manufacturer’s Championship.

To achieve the aerodynamic attributes Ford was looking for in a race car, the Talladega had to shed some of the Torino’s less aero elements. Holman-Moody, Ford’s racing contractor in North Carolina, is credited with helping Ford make the front section a little sleeker by flush mounting the grille and headlights. This was accomplished by extending the car’s length by almost six inches. They actually took a Torino rear bumper and narrowed and V cut in the center while the ends were filled making it look like an air dam. The rocker panels of the Talladega were also reshaped and rolled. This enabled the NASCAR teams to run an inch closer to the ground in competition reducing the center of gravity and increasing wind tunnel flow.

These production cars were only available in three colors, Royal Maroon, Wimbledon White, and Presidential Blue. 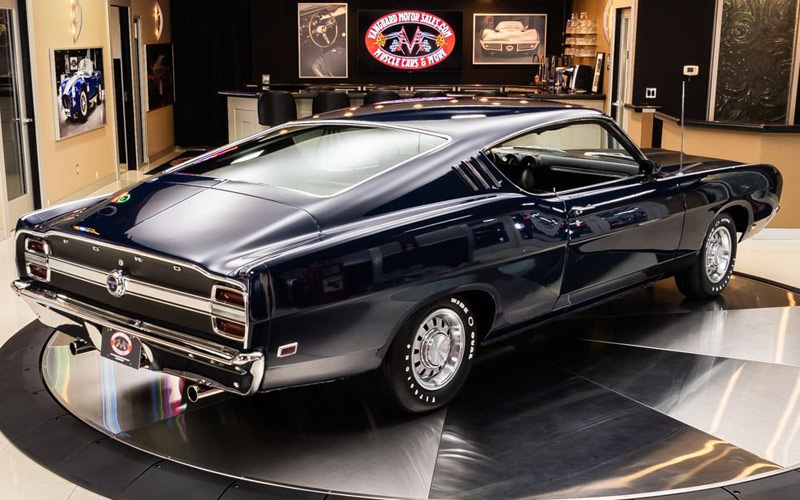