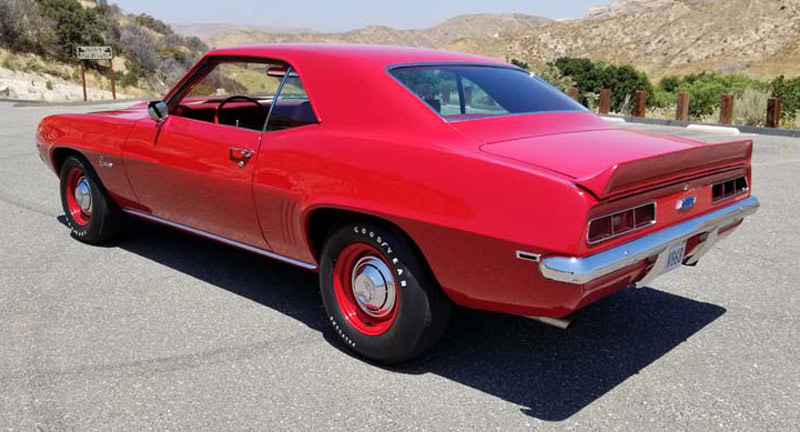 WWE Wrestler John Cena’s 1969 COPO Camaro has re-surfaced for sale. A private collector from Santa Clarita, California just listed it on the Cars-On-Line.com website in the Camaro Section. It has been well publicized that  Cena bought the car in 2007 for $175,000.

According to the current owner, John Cena’s 1969 COPO Camaro 427 benefitted from a frame-off restoration done in 2006. The seller notes that the car still looks so good that the restoration could have been done yesterday. (Look at photos and history on the ad page.)

Although the photos might make the Garnet Red color look brighter, when you see it in person you will note that the color is accurate to the original. “I would guess the car spent most of it’s life in Arizona,” the seller surmized. ” … or the Southwest, as floors, quarters, trunk, door, etc., all appear to be factory original. Engine appears to be the original, solid-lifter L72 numbers matching engine to this car. It is VIN stamped, and still has the original broach marks, indicating the block has not been decked.” He notes the 3963512 block, casting date of 11/6/68. It has correct 840 heads with the same casting date. The Holley List 4346 GE carb is date coded. The transmission is a Rock Crusher M-22 4-speed, also VIN stamped.

Historical information on the car indicates that it was built at the Van Nuys plant in California in the first week of December, 1968. It was an early build noted by the fact that it came with the early narrowed spoiler which was used in 1968. It is believed to be one of only seven COPO Camaros built at the GM Los Angeles assembly plant in Van Nuys. It is also one of the very few early COPO Camaros to receive factory chambered exhaust, which was later discontinued due to the fact it exceeded noise regulations in almost every state.

The seller notes that Cena frequently drove this car. He uses it to drive to cruise nights and car shows. He says it is meticulously maintained and still looks fresh from restoration.

The reason it was neccessary to use the Central Office Production Order (COPO) fleet ordering process back in 1969 was because General Motors had a corporate policy against installing engines over 400 cubic inches in anything but full-size cars and Corvettes. That frustrated many at Chevrolet, including Pete Estes, Chevrolet’s vice president, who understood the need for fast cars to feed the hunger for performance in the Baby Boom generation which was just coming of age. Chevrolet Product Promotions manager Vince Piggins found a way to circumvent the engine ban for certain buyers by using the COPO program. Normally reserved for fleet orders, Piggins was able to use COPO 9561 to get Camaros built on the factory assembly line equipped with the L72 427/425 horsepower special high-performance big block. If you knew about the COPO numbering system you could order up a race-ready 427 Camaro right from the factory.

You can’t imagine how that changed things for drag racing teams. With the L72 427 Turbo Jet 425 horsepower big block in a little Camaro, you could put the Muncie 4-speed in any gear and punch it through all four gears via a 12-bolt GM read end. All factory built. It saved so much build time for hot rod shops that they were taking orders on them to make them race ready.

Only about 1,000 COPO Camaros like this one were thought to have been built. The factory built about 1,015 427/425 horsepower L72’s as AA high performance motors for the COPO program. The Cena COPO comes documented with original Protect-O-Plate, and warranty information booklet. This car is a beautiful example of high performance Chevrolet history.