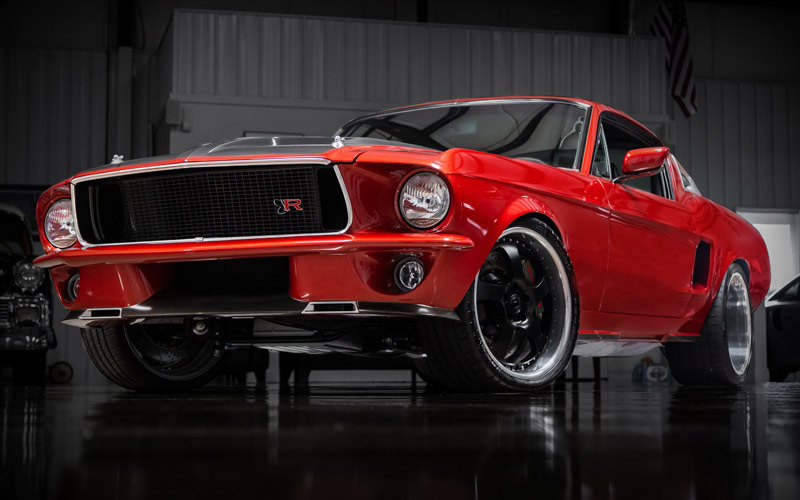 When the 1967 Ringbrothers Copperback Mustang resto mod first hit the car show scene, it was one of the top custom cars in the country, truly a rolling piece of car art. At the time, Ringbrothers was taking names, on their way to winning the top awards in the custom car industry.

The Copperback had been sold at the Barrett-Jackson Auction in 2010. Then, the car was sent back to Ringbrothers, roughly four years ago, and a ton of upgrades were completed. The upgrades included some exterior appointments, a complete new interior and some suspension work. So it has evolved beyond what the original show car was designed to be. (Follow this link to view dozens of detailed photos at the ad page.)

The famous Ringbrothers were pretty much showing off when they created the Copperback. Their level of craftsmanship is evident throughout. The body has numerous body modifications and over 70 custom machined billet aluminum pieces throughout. The brilliant Copper Burnt Orange Metallic paint and various accents are magnificent.

One might say it demonstrates the perfect stance accented by its 19: iForged wheels. Scroll through the photos to view an exquisitely designed and hand crafted interior, equal to or better than anything Ferrari or McLaren could produce.

This was not an old Mustang which was simply restored. Oh, no! The Ringbrothers completely custom refabricated it from hood to taillight panel. The stock bumpers were trimmed in width and height to pull them closer into the body which matches the profile of the newly designed front and rear. New exhaust openings were fabricated in the rear lower part of the quarter panels. The side and rear floors were replaced with aluminum. The rear was mini tubbed to fit the larger size wheels and tires. The body is laser straight with excellent gaps lines throughout. Then brilliant Glasurit Copper Burnt Orange metallic paint was sprayed over the straight body. The effect is stunning. All of the key appearance package parts were hand fabricated.

Jim and Mike Ring are not only two of the top custom car designers and builders in the country, but they are genuinely nice guys. Everybody says so. They started their careers old school, running a family collision and repair shop in little Spring Green, Wisconsin where they grew up. But their incredible talent at designing and building custom cars brought them to early fame. Ford Performance Parts Division was tapping them to test out and innovate as the resto mod market began to evolve.

Ringbrothers now markets an entire line of high-quality billet accessories as well as custom fiberglass and carbon fiber parts. They have won the SEMA Battle of the Builders, Goodguys Street Machine of the Year award, a Ford Heritage Award and so many more. If you frequent custom car shows throughout the U.S. you are likely to run into one of their builds.