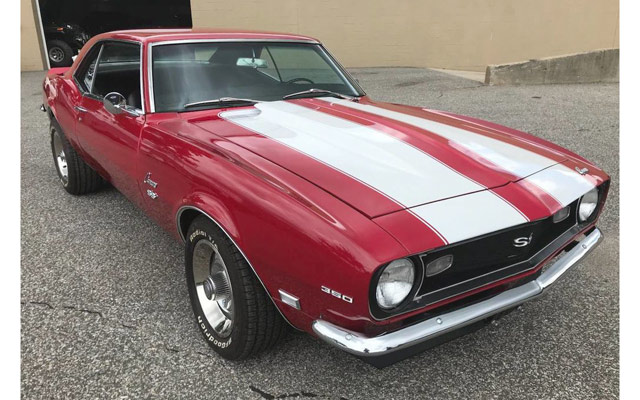 A surprise posting on a 1968 Camaro Super Sport was chosen as the Deal of the Day on the internet. We don’t see this very often. First generation classic Camaros are so highly prized in the collector car market that you never see them at what you might call a bargain price. But today one surfaced on the Cars-On-Line website that truly merits Deal of the Day status.

We don’t see this very often. An internet broker called We Be Autos tells us this is a real deal 1968  Camaro Super Sport. Sure, the 350 sbc is NOM, but so what? Camaros are among the Top Five most desirable American collector cars. This one has a “like new” interior, power disc brakes, 12-bolt posi rear end, 4-bolt mains with Flowmaster exhaust. (Follow this link to review detailed photos of this rare ’68 Super Sport Camaro.) They say the red basecoat, clearcoat PPG paint Is very nice and straight. They say it was done abour five years ago. It will be the Deal of the Day on Saturday because the asking price is only $28,995. Now that’s what I’m talkin’ about.

Every week, Cars-On-Line.com previews the classic cars and trucks which will be chosen as Deals of the Day for the coming week. The Deal of the Day preview is published in their weekly newsletter which comes out on Friday. It gives you first shot at all the cars that will be featured in the Deal of the Day feature on the Cars On Line home page. Often these cars sell in the newsletter before they even make it to the home page. You can see all of the coming week’s Deals of the Day when you read the fresh edition of the Cars-On-Line newsletter.