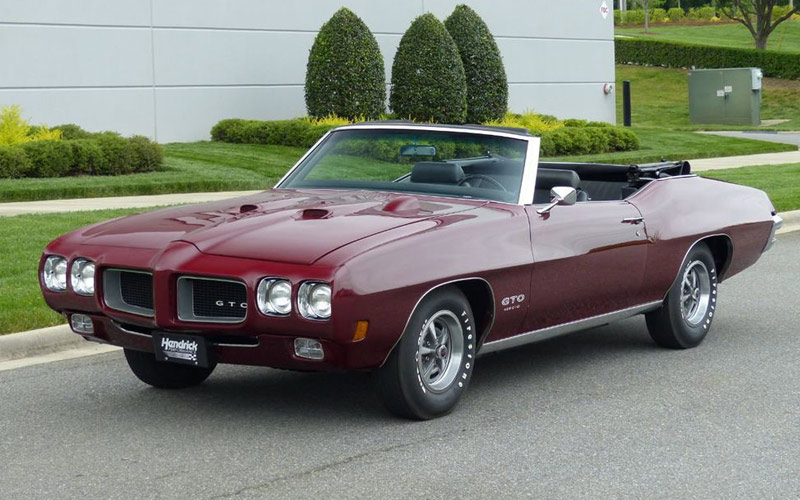 By the time the 1970 Pontiac GTO 455 HO Convertible made the scene, Pontiac had already dominated the muscle car world for the past six years. As everyone else in Detroit was catching up, Pontiac came out with its gargantuan 455 HO engine. As usual, Pontiac also had the best TV commericals for new car sales in 1970. Remember “The Humbler” commercial? But what American Baby Boomers probably remember most about the GTO that year was that it was the best looking car on the road.

This week, Hendrick Performance from Charlotte, North Carolina has listed a 1970 Pontiac GTO L75 Convertible in Burgandy over black. (Follow this link to see dozens of detailed photos.)  It is being offered out of the collection of NASCAR team owner Rick Hendrick. Famous for their museum-quality collection, his mechanics also build modern Pro Touring cars right there at the shop. So you know they know what they’re doing when it comes to muscle cars.

This GTO shows so sweet and smooth that you wouldn’t guess it has the 455 HO motor with a Heavy Duty Muncie M21 4-speed. It’s so nice it’ll make you look twice. This jaw dropping 1970 Pontiac GTO 455 HO Convertible has been frame-off restored to an uncompromised level of detail and accuracy. The restoration utilized every period correct GTO component available. During the restoration, great care was taken to ensure that the car was built back to Pontiac factory condition. “The quality of the restoration is nearly flawless inside, outside, and even underneath,” they wrote in their descripition. It has won an AACA National First Prize award.

Only 1,919 GTO’s were built with the legendary L75 455 HO motor and an M-21 4-speed. Yet less than eight percent of those were convertibles (158 in total.) Add in the color combination of Burgandy over black and the number becomes even lower.
Pontiac only rated it at 360 horsepower, but that might be a little misleading. They also said it put out 500 foot/pounds of torque at 1300 rpm. That’s a lotta’ torque for the horsepower.

What is really interesting to note is that this GTO L75 comes with the McKinnon 12-bolt rear end with an 8.75 inch diameter ring gear. The McKinnon axle was stronger and better able to handle the monster torque. It also has a 3.25″ diameter steel driveshift. We’ve seen them run in the nostalgia drags at the Mid-Michigan Motorsports track. They run 13’s all day.

Hendrick Performance tells us their GTO shows 20,380 miles on the odometer. But they will be selling the car as mileage exempt. Engine numbers and trim tag information is listed in the ad (at the link.) It comes with an original tank sticker, original owner’s manual, PHS documents and a set of restoration photos.

The Pontiac slogan, “Others have caught on, but they haven’t caught up” doesn’t refer so much to performance as much as it refers to the whole package. The ambience of a muscle car. GTO had it. 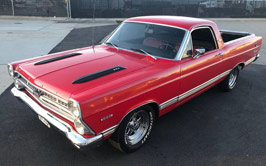