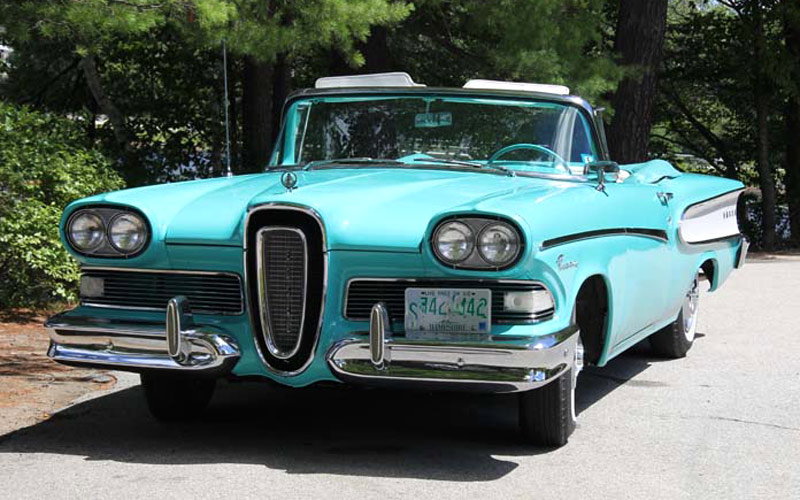 They always say that the best collector cars are the ones which were popular in their day. But Ford Motor Company’s experiment with the Edsel turns that theory on its head. In fact, the Edsel was born to be a collector car. Its unusual looks limited its acceptance by the new car buying public back in its day, so the production numbers were low. Today they are rare and hard to find, perfect for the collector car market. That makes them more valuable than similar Ford products of the 1950’s.

To prove that point, this week a private collector from Rindge, New Hampshire is offering his 1958 Edsel Pacer Convertible for sale. It is the Turquoise over White version with the desirable Teletouch electronic push button automatic transmission. The seller says it features Coker radials designed to exactly duplicate the look of the original bias ply tires which would have come with the car. Of course, they are white walls. He says the top works with new top cylinders. (Click here to read the ad description and view dozens of detailed photos in the ad.)

Ford’s think tank back in the mid-50’s came up with a grand idea. They would create a new division of Ford Motor Company to compete with the upscale models put out by GM and Chrysler. According to their marketing research this was a “can’t miss” idea and they poured enough advertising money into it to guarantee success. They even created a series of Edsel dealerships around the country, about 1,800 of them. They hyped the car over the air waves and on TV with all four major TV networks running ads.

Edsel came out with four models in 1958, their second year of production. The larger Mercury-based Citation and Corsair shared their model chassis with Mercury based models. The smaller Pacer and Ranger shared a chassis with the Ford based Fairlanes. The Pacer came as a two-door or four-door hardtop, four-door sedan, or two-door convertible.

The 1958 Edsel Pacer Convertible was a step above the Edsel Ranger which was not offered as a convertible. It had contoured seat backs, nylon upholstery, and extra stainless steel exterior and interior trim pieces and window moldings. A basic heater was available and air conditioning was optional as well. The Pacer was built on the Ford Fairlane 118 inch wheelbase and could be ordered with a 361 ci V8, standard with a three-speed manual transmission. Optional was a a three-speed automatic transmission shifted on the column. One of the most highly promoted features you could order on a Pacer was the Teletouch automatic, with gear selection buttons in the steering wheel hub. Most of the parts for a 1958 Pacer can be scavenged off a Fairlane or Fairlane 500 with the same body type.

Ford’s “E-Car”, for “experimental” was to be the super car of its time. Ford sunk a lot of money into the research and design of this new class of car it would reveal to America. You see, Ford had just become a public company in 1956, and was out to prove that the new corporation (out of the control of the Ford family) would become an American juggernaut in the financial world. The “E-car” became the Edsel, named after Edsel B. Ford, the son of Henry Ford. The name was to be a tribute to the Ford dynasty, but poor sales turned the name “Edsel” into an American slang term for something nobody wanted.

Edsel suffered from bad timing. By the time Edsels hit the showrooms the U.S. economy was in a recession. So after all the hoopla and advertising Ford invested in to promote the Edsel, it was apparent right from the beginning that buyers were not as excited. They say 2.5 million people poured into the new Edsel dealerships on “E-Day” in 1957. Then, many of the Edsels showed up at the dealerships with parts missing from the factory. The new Edsel dealers did not have those parts. It was a catastrophy. On top of that, Edsel cars were supposed to be top-of-the-line models with prices that frankly people could not afford. The eccentric look of the front end of the Edsel was a little hard to get used to. With more than three strikes against it metaphorically, Ford Motor Company called the game. The mighty Edsel had struck out.

Oddly, the very fact that it was so maligned in its time seems to be why car collectors love to collect Edsel cars today. There are so few around that when you see them for sale they usually sell quickly. There is another 1958 Edsel Pacer Convertible being offered for sale at the Fall Auburn Auction this weekend at No Reserve. Watch what it sells for. Then make your offer on this Turquoise and White beauty.