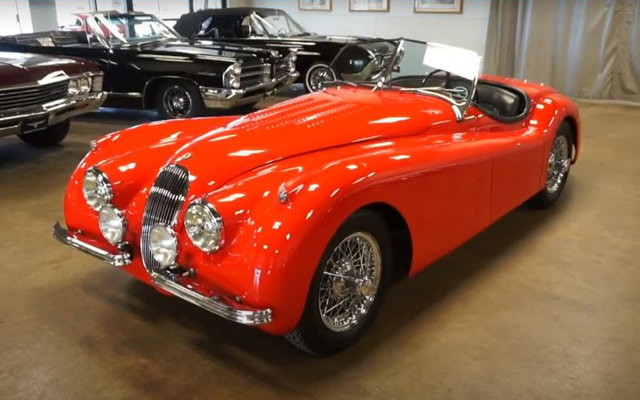 When Sir William Lyons designed his early Jaguar XK120 it was to display it at the 1948 London Motor Show at Earl’s Court. After that the sports car world would never be quite the same. The immediate popularity of the iconic sports car won over the public and the press. The inline dual overhead camshaft for the six cylinder engine was revolutionary. So the XK120 body was designed to get attention for the new dual overhead cam engine. The engine was then to be outfitted in a saloon. It was somewhat a surprise to Lyons that the total sports car design became so popular … in fact, one might say, legendary.

This week a 1954 Jaguar XK120 SE Roadster is being offered for sale at The Last Detail in N. Chicago, Illinois. (Follow this link to review dozens of high resolution photos.) They tell us it was a late production SE sold new to a California buyer by way of Jaguar importer Charles Hornburg in Los Angeles. The red with black leather interior is an excellent combination that works well on this Jaguar. It has the 3.4 liter engine which they rated at 180 horsepower. It includes a black soft top, side curtains, a tonneau and a spare with tools.

Being a late production 1954 edition, the Jaguar was the best of the first generation of XK120’s. This roadster was built on July 16, 1954. Two weeks later on July 30, 1954, it was shipped to California. Its late-production items include the curved handbrake lever, flat horn button, and flatter seats yielding more passenger space. The period style Brooklands windscreen adds a 1950s racing flavor, with proper covers included when the full windshield is not in use.

Obviously the SE was well maintained all these years. Under the prior owner, the Jaguar was given a comprehensive frame-off restoration to concours standard in 2014 at Bill Tracy Jaguar of Sarasota, Florida. The restoration has been carefully maintained ever since, with accolades including a Best of Show award and at the Jaguar Clubs North America judging, earning scores of 99.59 and 99.79 out of 100 points (both in 2016.)

The first XK120’s would be known for their alloy bodywork coverng a stout chassis. The first year XK120’s had a complete alloy body. After the first year the hood, trunk lid and doors remained of alloy, but the rest of the body was made of steel. State of the art torsion bar independent front suspension gave energy to the live rear axle with semi-eliptical leaf springs. Upgrades such as wire-spoke wheels, auxiliary driving lamps, overdrive, dual exhaust, and a lightened flywheel and damper created a more responsive drivetrain.

But it was that new enginge that had Lyon’s enthusiasm. Said to be capable of 120 mph, the XK 120 moniker was fitting. For the day, the new Jaguar was extremely quick, capable of sprinting from 0 to 60 mph in less than 10 seconds. The first 3.4L inline six Jaguar motors were rated at 160 hp. For this Jaguar XK120 SE the engine output rose to 180 hp by adding a pair of 3/8th-inch high-lift cams. All that power was handled by a 4-speed gearbox.

Maintaining the XK120s competitive edge in racing and showroom sales, the SE or Special Equipment package (designated M for Modified here in America) was available through 1954, after which the next generation XK140 was to arrive. There were 1,769 XK120 roadsters produced for 1954. The original list price back then was $4,099. The XK120 model was produced from 1948 until 1954.

Documents include a Jaguar Daimler Heritage Trust certificate, with print and CD handbooks, and a judging sheet and award confirmation from the JCNA. A full spare wheel/tire, roadside jack, air pump, tool roll, and wheel hammer complete the factory tool kit from Jaguar in 1954.

Whether your interest lies in touring or just showing it at concours, this vintage Jaguar will provide a satisfying experience for a true sports car collector. 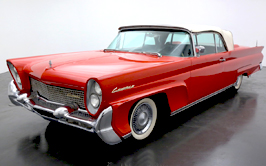