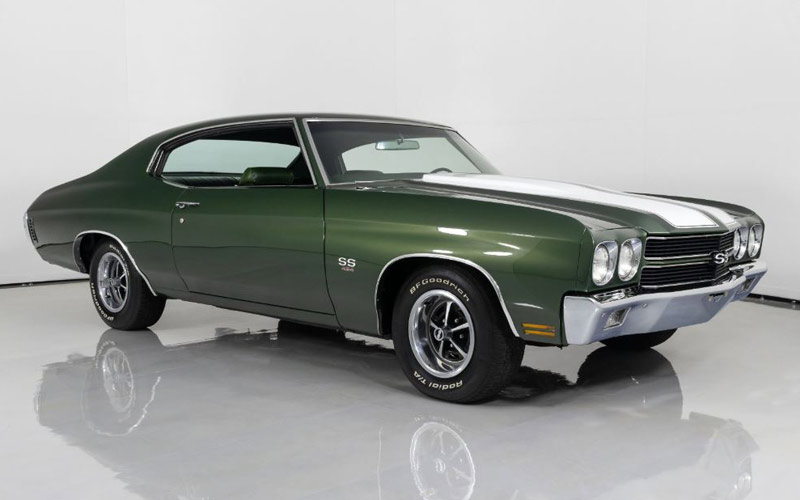 The adage of the era was … “there’s no replacement for displacement” and no other car had more horsepower than the LS6 Chevelle 454. When you checked off RPO Z15 on your order sheet, you got the monster of the midway, the factory rated 450 horsepower, most powerful bowtie of all time. There will never be another like it.

A Forest Green 1970 Chevelle SS LS6 454 is currently being advertised in the Chevelle Section of the Cars-On-Line.com website. (Follow this link to view dozens of detailed photos, including the undercarriage.) The highly documented factory Chevelle LS6 454 is being offered by Fast Lane Classic Cars in St Charles, Missouri. They note that it is numbers matching with a Muncie “Rock Crusher” M22 4-speed transmission, 12-bolt rearend with 3.31:1 Posi, correct Forest Green exterior, and correct Dark Green bench seat.

The salient virtue of this LS6 Chevelle 454 is its impeccable documentation. The paperwork includes an original window sticker, original build sheet, Protect-O-Plate and owners manual. You can see photos of the documentation on the ad page here. They say they have titles since new with nearly all the owners known. They also indicate that the casting dates are correct for the engine and accessories.

An extensive restoration was performed, finished in the correct Forest Green colors with correct Dark Green bench seat interior. The car has power steering, power disc brakes, original LS6 454 was rebuilt at a cost of $11,000, day and night rear view mirror, padded dash, Rally gauges, and front and rear seat belts. Check the equipment with the copy of the build sheet in the photos.
Fast Lane Classic Cars tells us it is one of only 4,475 LS6’s produced in 1970. Extensively restored, it remains finished in the correct colors. These cars were not cheap. To get an LS6 fully optioned could cost over $4,000 new.

The LS6 engine was a 450 horsepower 454, the most powerful monster motor available. Fed by an 800-cfm Holley four-barrel carburetor on an aluminum manifold, it created 11.25:1 compression with solid lifters, four-bolt mains, forged steel crank and connecting rods, forged aluminum pistons, and deep-groove pullies, No production engine ever had a higher factory horsepower rating. It created over 500 foot-pounds of torque. Factory LS6 Chevelles were known to do sub 14 second ET’s at over 100 mph.

Tested by Super Stock and Drag Illustrated Magazine in 1969 and 1970, the solid lifter LS6 Chevelle ran a faster quarter-mile than a Hemi Road Runner by a little over one-tenth of a second. Was one faster than the other? That depends on the driver. But tests by Car Craft and Hot Rod Magazine prove that the Chevelle LS6 was very much at the same level as the Hemi Mopars.

The new Chevelle for 1970 ran on a 112-inch wheelbase with a wider track and big polyglas tires. That meant it could handle almost like a Camaro and accelerate like a rocket. With the big cowl induction hood, it could breath better than a standard muscle car. You’ll know the sound of an LS6 Chevelle 454 when you hear one. Listen as the solid lifter 454 begins to cackle when they start up this monster LS6 in the video.

The 112-inch wheel base Chevelle LS6 handled almost as easily as it accelerated. All that power in a car that could handle like this is amazing. Mopars go in a straight line, but this Chevelle could fly and turn corners.

One Response to Is an LS6 Chevelle 454 Better Than a Hemi?