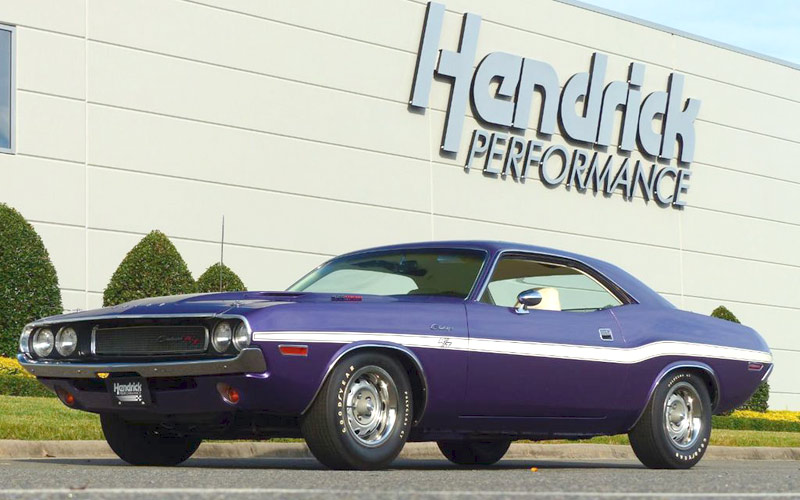 426 Hemi cars, much as this Hemi Challenger R/T from the Rick Hendrick Collection, are the premier classic muscle cars of our time. In 1970, these E-Body Mopars joined the Pony car wars among American automotive manufacturers. Later, when the Baby Boomer generation came into their wealth, the 426 Hemi Mopar muscle car became the quintessential icon of the American car culture.

New for 1970, Chrysler introduced the Dodge Challenger as a model that was directly positioned to compete against the fierce competition in the popular pony car market segment. Beneath this Challenger’s “power bulge hood” was the reason for much of the excitement … the famed optional 426 ci Hemi V8 that produced 425 horsepower. (Follow this link to view dozens of detailed photos.) Presented in its “Plum Crazy” purple color this 1970 example is one of only 150 Hemi cars produced with an automatic transmission, and has all the sporty features typical to the Challenger including Rallye instrument cluster package, power steering, dual exhaust, bucket seats, center console, chrome exterior mirror and Rallye wheels. It is being offered for sale at Hendrick Performance in Charlotte, North Carolina. Rick Hendrick’s specialty car shop always has some top level collector car offerings.

They tell us that the 1970 Dodge Hemi Challenger R/T has been treated to a comprehensive rotisserie restoration. Hendrick Performance writes in its ad that it “is in absolutely exquisite condition. Every inch of the Challenger has been restored or reconditioned to a superior level.”  As a result, it achieved 211 points out of a possible 221 awarded at the prestigious 2004 Mopar Nationals judging event.

These days, Mopar buyers demand that a Hemi car have bullet-proof paperwork which will prove that it is numbers matching. This Hemi Challenger R/T has, not one, but five Chrysler Corporation broadcast sheets. (Broadcast sheet is Mopar terminology for build sheet. See a photo of the five broadcast sheets  included in the Hendrick Performance ad.)

When you compare factory production numbers, there were only 286 Dodge Challenger R/T hardtops produced with the 426 Hemi engine in 1970, the first year they were offered by Dodge. Actually there were more Hemi Cudas produced than Challengers. A total of 652 Hemi Cudas were produced in that first year of E-body styling. Even sweeter, the E-Body Hemi R/T was a little longer in wheelbase, and usually came with more options than the Hemi Cuda. Who would have guessed that the first-year E-body Hemi Challenger would become more rare than the legendary Plymouth Hemi Cuda?

Chrysler’s 1970 Dodge Challenger model was an eye-grabber with a deeply recessed grille set back behind the dual headlamps. The rear lights spread the length of the valance. The center section of the rear lights had large single reversing lamps and the Dodge logo spread across it. The R/T came standard with the Sport Hood, a power bulge hood fitted with dual air intakes which were not connected directly to the air filter. Rallye instruments were standard on the R/T. It had a cluster containing four large equal sized pods with a 150-mph speedometer, 8,000 rpm tachometer, clock and the remaining pod containing four gauges for oil pressure, alternator, engine temperature and fuel.

The Challenger was Dodge’s entry into the Mustang-created “Pony Car” segment of the muscle car market back in the day. Introduced for the 1970 model year, it was one of two Chrysler E-body cars, the other being the slightly smaller Plymouth Barracuda/Cuda. Dodge advertisements of the day announced the all-new high-performance pony car quipping that ‘The Pony has a mean streak.”

Competition was fierce in the muscle car war among automotive manufacturers, and both these cars were available in a staggering number of trim and option levels as well as virtually every engine in Chrysler’s inventory. If you checked the 426 Hemi engine option when ordering a 1970 Dodge Hemi Challenger R/T you automatically got the factory Super Track Pack A34 option with the Sure Grip differential, and 8 3/4″ Dana rear axle equipped with 4.10 gears. Only 150 Hemi Challenger R/T’s were built with an automatic transmission.