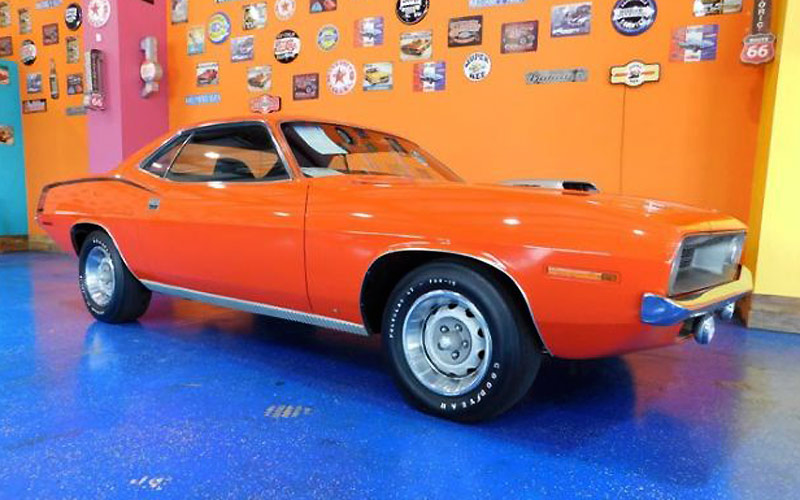 Nothing gets Mopar collectors juices flowing like finding a real R Code 1970 Plymouth Hemi Cuda Survivor like the one just listed in the Cars-On-Line Mopar Section this week. Although this Tor-red Hemi Cuda has surfaced a few times before at high end collector car auctions, its appearance this week will have the Mopar collector community buzzing again.

The for sale posting on an EV2 (Tor-red) 1970 Plymouth Hemi Cuda Survivor by Haggle Me.com this week will renew some enthusiasm in the Hemi Cuda market. (Follow this link to review the Haggle Me.com ad and view the photos.) It is one of only 284 4-speed Hemi Cudas produced in 1970. When this car last surfaced it had only 36,000 miles on it, and that is what the seller says are on it today. The most important aspect of this Hemi Cuda is that it is original and unrestored. (The seller notes that it has minor paint work on the passenger side.) The history on the car has been documented from new. It is documented by Roger Gibson, noted Mopar restoration specialist. And Galen Govier, a Mopar historian, has written a report on the Hemi Cuda to include it in his Chrysler Registry. They both say it has an original matching numbers drivetrain with the 426/425 hp Hemi engine, dual 4-barrel carburetors and a 4-speed manual transmission with Hurst Pistol Grip shifter. It is a factory Shaker hood car. And, of course, it has the A34 Super Track Pak with 4.10 gears.

From the photo of the fender tag we can see that this is a real R Code 1970 Plymouth Hemi Cuda.  In the bottom left corner is the important number which reads E74. That is the engine code for a 426 ci Hemi motor. Then you read the next number to the right, it says D21 to show that it was an original 4-speed car, very rare. Then to the right of that is the BS23 code denoting it is a Plymouth Cuda. When you match that to the VIN number with an “R” code in it you know you have a real Hemi Cuda from 1970. 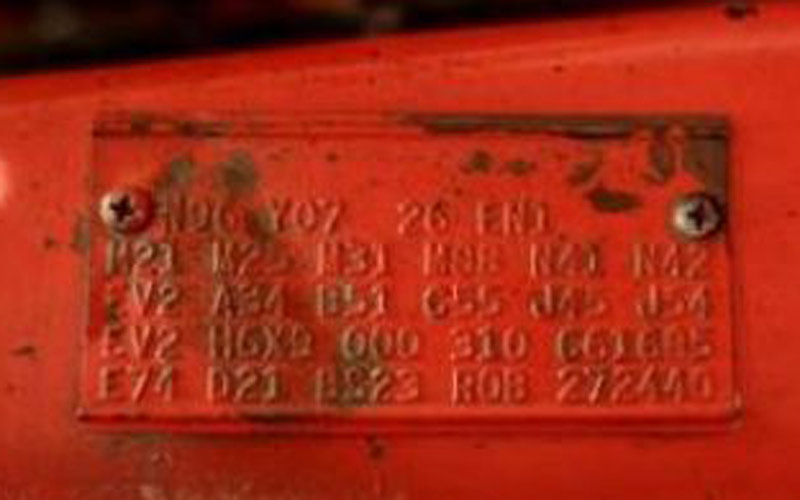 We know from the owner history that this R Code 1970 Plymouth Hemi Cuda was built at the Hamtramck plant in Michigan and was actually exported to a Canada. It was ordered by the first owner from Winnipeg, Canada. It was later purchased by another resident of Winnipeg and he owned it until 1984. A collector from Florence, Oregon then bought the car. It remained in Florence for the next eleven years. The Oregon owner was a true collector who stored the car in a climate-controlled building. He then sold the car to a Washington state resident who further documented it. In his correspondence he said the motor had never been removed from the car and stated that it was a true time capsule, preserving its originality. He sold the car to a Chrysler dealer who was also a collector in Washington state. He sold it to a collector who had been looking for an original, unrestored Hemi Cuda 4-speed without a vinyl top. He then maintained the vehicle in his collection for the next 15 years.

A 1970 Hemi Cuda with all original sheet metal is so incredible to find today. When Roger Gibson inspected the car he said it was never abused, never driven hard and always well-maintained. There was a scrape in the paint on the passenger side which Gibson blended when it was at his shop. Gibson also went through the Hemi 426 engine to estimate the wear. Otherwise the car remains untouched.