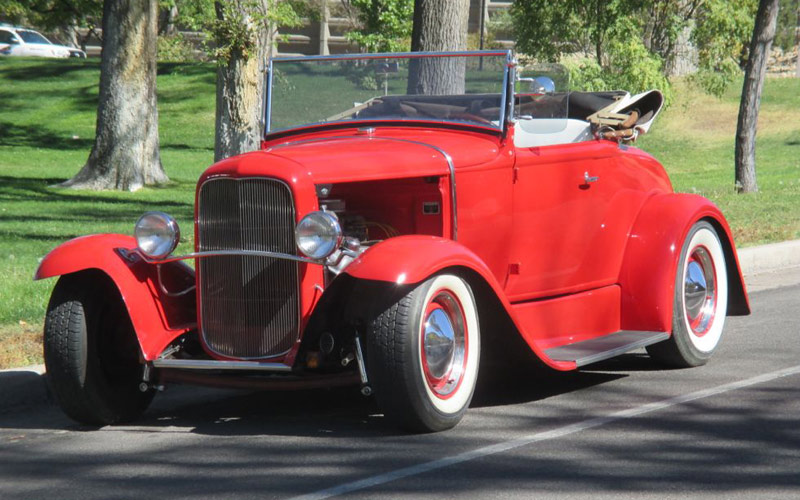 The question often comes up, “What is an ‘old school hot rod?’ ” Trying to put together academic sounding answers to the question are often disappointing, and leave the inquirer more confused than ever. However, this week a 1930 Ford Model A Roadster was listed for sale from Albuquerque, New Mexico that truly is the definition of an “old school hot rod.”

The seller describes his ’30 Sports Roadster as a “Genuine real-deal-Henry-steel roadster body hot rod original” done right. What we look for in an “old school” style rod is a custom modified body, custom built high performance motor and older style wheels with hub caps. Often you see whitewall tires and after-market hubcaps such as “steelies”.

On this 1930 Ford, as an old school hot rod, the modifications look to be decades old. It has welded-in flat steel floors, modified firewall and a 1940 Ford dash which is a work of art the way it was installed. (You can find photos in the ad on the Cars-On-Line website this week.) The car also retains its original chassis. The seller says that in about 1996, this car was redone retaining its original Henry-steel body, but with fiberglass fenders, hood top and ’32 grille shell. The splash guards and running boards are steel. Among the new updates in 1996 were quality VDO instruments and billet aluminum insert installed in the original Henry-steel ’40 Ford dash. Included in the updates it was given a Mr. Goodwrench 350 Chevy engine w/ Weber 4-barrel carburetorl and 350 transmission, a glide seat, new top irons, top, and upholstery. In addition, it now has a  Walker radiator, disc brakes up front, chrome shocks, dropped headlight bar w/ King Bee headlights, 4-bar front and rear suspension, Pontiac tail lights, adjustable coil overs at the rear, and a Ford 9″ differential.

In the year 2000, the car was put into storage and not attended to again until 2015. When it was removed from storage, a few more updates were done, i.e. a new Vega steering box installed with cross steering, new starter, new Accel HEI distributor, new 18 gallon fuel tank, new fuel pump and a very handsome Grant wood-rim steering wheel. So this hot rod roadster has evolved over the years into a street worth artefact, capable of keeping up with highway speeds on the way to your next car show. The New Mexico seller says it “begs to be driven.” He says it does have a valid title and registration in New Mexico.

The Centari acrylic enamel 1970 Chrysler “bright red” paint is now 24 years old, but you should see it in person. The seller says it presents well and attracts a lot of attention. He says “it starts, runs, drives, steers, handles, and stops, very well. All gauges, lights, turn signals, horns, work very well, including the clock!” He notes that the car does not have power brakes, power steering, radio, heater or wipers.

So What is a Hot Rod?

If the question is what is a hot rod, the National Street Rod Association defines it this way: an “automobile from 1948 or earlier that has undergone some modernization to the engine, transmission, interior, or anything else. A hot rod… is designed for racing.” A lot of early racing technology was discovered on the dry lakes and salf flats out west. That is where early custom roadsters were being raced extensively. In the Southeastern part of the United States, moonshine running was a major industry, and the moonshiners were pretty innovative with building custom cars that could go fast.

The term “hot rod” seems to have come out of the mid-1940’s era. Robert E. Petersen started Hot Rod Magazine in 1948. Hot rodding became mainstream when Petersen and Wally Parks began guiding it to acceptability as a hobby. Sanctioned drag racing events began to catch on and took hot rodding off of the streets to some extent.

When you add “old school” to the term hot rod, you are indicating a custom build from a certain era. In the early years, hot rods were Model T roadsters, often with small fuel tanks (quarter barrels) attached behind. As the hot rod scene evolved, modified Model A roadsters were taken to oval tracks, windshield’s removed and the losers got their faces dirty. Old school hot rods might have painted wheels and Flathead engines, Offenhauser intakes and velocity stacks, eschewing more modern technology.

Cars which were built back in the day, and are preserved for today will appeal to a special type of hot rod collector today. The car becomes more valuable if it has a known history, especially if it can be documented. Many cars were both shown at car shows and raced. The way the car was built and the speed shop equipment used can also increase the value for collectors.

You will find this 1930 Ford Model A Roadster, as well as dozens of other examples, in the Street Rod Section on the Cars-On-Line website.