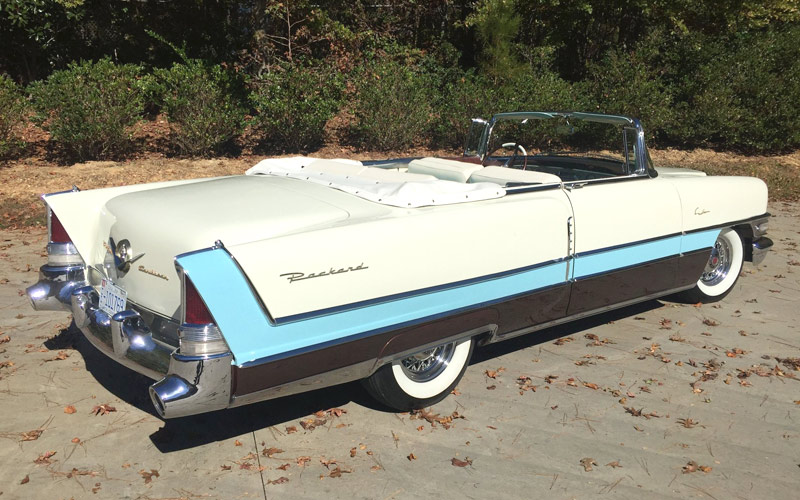 The Packard Caribbean was so advanced for its time that its competition, Cadillac, Lincoln and Chrysler, were unable to keep up with its innovation and dependability. Because it was one of the most expensive passenger cars available that year, there were only 276 convertibles produced. That makes them incredibly rare and desirable for car collectors today. Unfortunately, the very thing that made Packard cars great may have added to the demise of the company. All of that innovative quality became too expensive for production. 1956 was the last year the Caribbean was offered. Not long after that the proud Packard name ceased to exist.

This particular Caribbean was restored some years ago and shows signs of use, but no rust repair. They say it is very well sorted, and runs and drives extremely well. The Dual Quad intake has been fully rebuilt. While it starts up quickly and quietly, it is very powerful and pulls strong through the gears. They say the Push Button Drive is smooth, and the brakes remain strong and true. According to the description, the power windows all work as does the power convertible top.

There are only a handful of MES color code 1956 Caribbean Convertible examples available. The MES code stands for Dover white, Danube Blue, and Roman Copper, a tricolor exterior. It is a combination most coveted among collectors.

Motor
When Packard first introduced their V8 engine it was in 1955. But in 1956, Packard increased the cubic inch capacity to 374 CID. The Caribbean, with its two, four-barrel carburetor arrangement, produced 310 horsepower making it the most powerful high compression engine available in an American production car for 1956. The dual quad carburetors were housed in the iconic Batwing air cleaner.

Transmission
The engines were backed by Packard’s ‘Ultramatic’ automatic transmission with a lockup torque converter with two speeds.

Interior
The Caribbean was the top-of-the-line model with three-tone paint schemes, two-tone leather interiors, and an ornate dashboard and ornamentation layout. In the ad photos you will notice the deluxe “space age” dashboard, which was considered way ahead of its time. New for 1956 were the reversible seat cushions with two-tone leather on one side, and cloth and leather on the other.

Cost
The 1956 Packard Caribbean was the second most expensive car on the American market, with a base price of $5,995 for the convertible.

Packard called it their “Halo” car, the flagship model that represented everything Packard stood for during the classic ’50s era. With its dual hood scoops, dual synchronized power antennas, cut away wheel wells and all that gorgeous chrome, the Packard Carribean was one of the monumental achievments of Packard designer Dick Teague. The 1955 and 1956 Packards were the last proud signature cars produced by Packard, as the company ran into financial trouble and merged with Studebaker in its final days. These last great Packards are highly sought after by collectors today.

You will find more classic Packards listed in the Packard Section on the Cars-On-Line website.