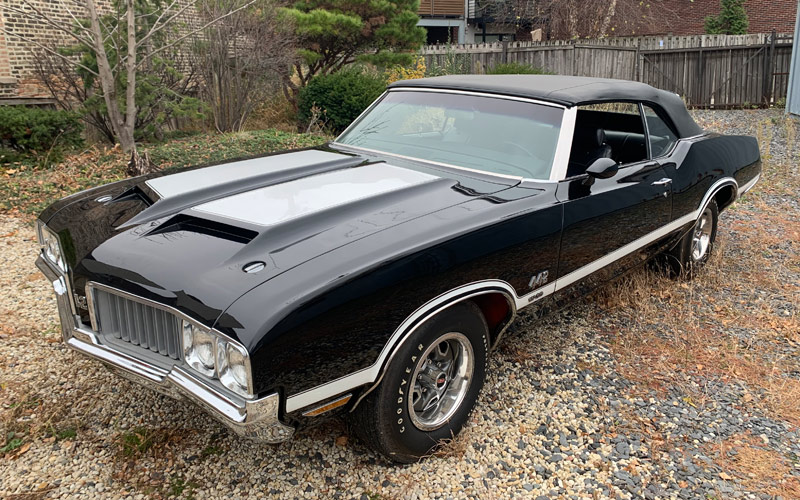 Oldsmobile muscle car collectors, how do you define rare? Try this, a triple black 1970 Oldsmobile 442 W-30 Convertible … with a 4-speed … numbers matching. I think that’s the way Webster’s dictionary should say it. But you won’t find it there. You’ll only find it in the collection of a Chicago area car collector with a keen eye for muscle car pedigree.

A triple black 1970 Oldsmobile 442 W-30 Convertible was just listed for sale in the Cars-On-Line Oldsmobile Muscle Car Section online. (For a look at the ad and photos, follow this link to the ad page.) And, yes, it is black with a black interior and black convertible top. Some top Oldsmobile collectors will know the car since it was shown at the 2006 Oldsmobile Nationals where it was judged. It scored 990 points out of 1,000. It has been in that same owners collection ever since. He considers it, “One of the coolest Oldsmobiles ever built.”

He noted that he has the original order sheet, invoice and Protect-O-Plate for this car. What makes it very special is that it was a featured car in the Buddy Holt Collection. Buddy Holt was an Oldsmobile dealer who was well known for his Oldsmobile muscle car collection. When Holt sold the car  it was purchased by a New York buyer who did a restoration on it. In a comment in our blog, Holt told us, “This is the ONE car I wish I had never gotten rid of!!!!” 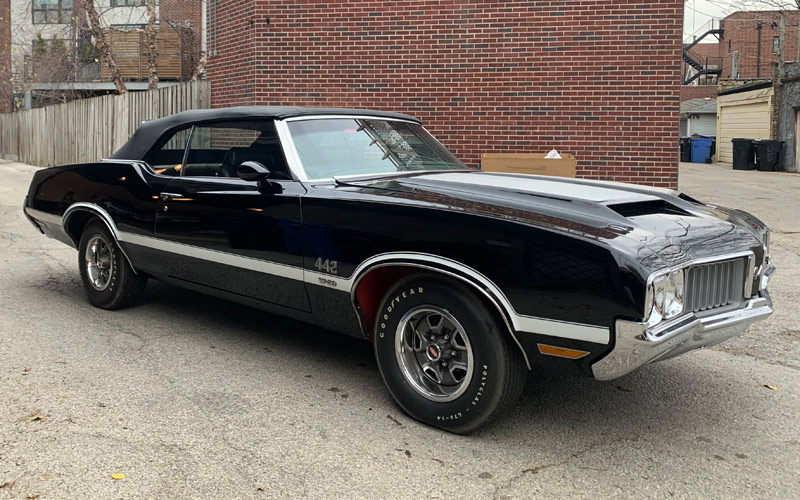 Oldsmobile collectors believe that there were 264 W-30 convertibles built in 1970. Of those, only 96 were thought to have been 4-speeds. The owner figures only a handful could have been produced in triple black. Is there another one in existence?

When the seller purchased the car in the late 1990’s, it was taken down to the frame and a nut ‘n bolt restoration was performed by Jeff’s Resurections in Taylor, Texas.

The more you get involved with muscle cars the more you recognize that there are two echelons of collector cars. There are those that are perfect originals with documentation and pedigree … and then there are all the rest. This one is the former.

In 1964, the Oldsmobile 442 became the Cutlass F-85’s muscle car persona. From 1966 on, the optional W-30 performance package was available on the 442. It included a highly efficient cold-air intake system, high-lift, long-duration cam, and much more. But by 1970, the W-Machines, as they were then called, came with a massive 455 cubic inch V8. Advertised at 370 horsepower (yeah, right!), and delivering about 500 foot-pound of torque, the new W-30 pulled fresh air through a new W-25 Forced Air Induction system with the help of a twin-scooped Outside Air Induction (OAI) fiberglass hood. Beyond that, the W-30’s were factory blueprinted with internals carefully matched.

Unlike their GM cousins, the Chevelle LS6 454 and the Pontiac GTO Ram Air IV, the Oldsmobile 442’s were well appointed with creature comforts. They were the muscle cars for the executive class, so to speak. If you check the invoice shown on the COL ad page, you will see that this triple black 1970 Oldsmobile 442 W-30 Convertible came with tinted glass windshield, wood steering wheel, Super Stock wheels, Vari-Ratio power steering, Rocket Rally gauges, a locking differential and a deluxe radio. The only feature you could not get on a W-30 4-speed car was disc brakes.