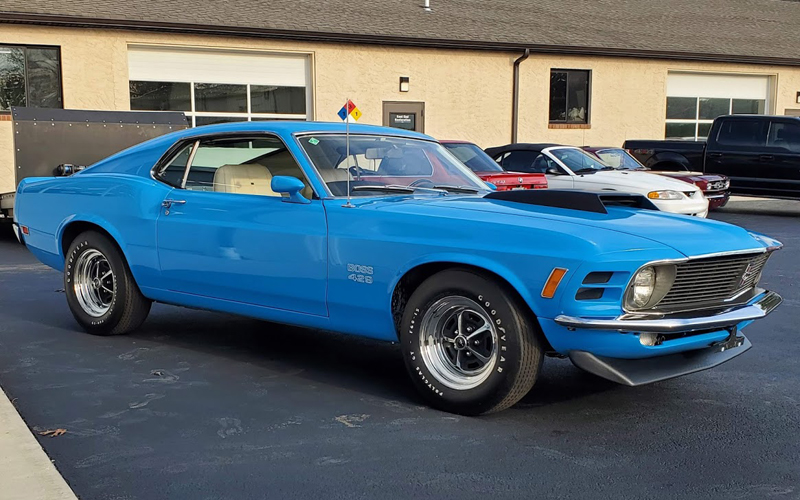 As you watch the video test drive, a 1970 Boss 429 Mustang purrs onto the roadway and then launches down a country road picket fences forming a white blurry line as the throttle feeds that big Boss 9 engine. A nostalgic ride in the autumn colors. You wonder, does life get any better than this?

A Grabber blue 1970 Boss 429 Mustang has been posted on the Cars-On-Line website this week by We Be Autos, a collector car broker in New York. In addition to a complete walk-around video and test drive, they loaded hundreds of detailed photos on their ad page. (Find the photos here.) This car deserves all of that. This is a beautifully restored car with just 65 miles on it since the redo. They say it was restored by Kevin Manley of Kevin’s Classic Cars in Cannon Falls, Minnesota. Kevin actually worked at the Kar Kraft plant where the Boss 429’s were built, according to the video discussion.

Not only is the panel fitment perfect, all of the correct chalk markings and decals are as from the factory. It has detailed parts that are almost impossible to find today. Notice the panel gaps in the photos. This car is so clean and gleams as it grins at you. It was probably not this nice when it left the factory. You will notice that even the accent lights work for the rear passenger seating.

Michael, from We Be Autos goes through the car in a very effective walk-around video, then drives away in the final scene of the video. You’ve got to see this:

Of course, a Boss 429 came with the Drag Pack option, so you’ll see the big oil cooler in front of the radiator. The trunk parts are present, , including the original style trunk positioned 85 amp battery, and the collapsible spare tire.

Ford only made 285 Boss 9’s in this configuration in 1970, according to the Marti Report (see a copy of the Marti Report in the photos.) This one came with the 429 ci 4-barrel Cobra Jet HO motor with functional Ram Air, and it has the correct cable actuator for the Ram Air. If you read the Marti Report, you will find that it came with a close ratio 4-speed that was floor mounted. The rear end is a Traction-Lok with 3.91 axle ratio. The competition suspension was part of the Boss 9 standard equipment. Extras included the High Back bucket seats and center console, the Visibility Group package and color keyed racing mirros. In the driver compartment you will find a Rim Blow Deluxe steering wheel and a tach.

The car was assembled at the Dearborn plant in December of 1969. It was sold by Murry Motor Company in Wills Point, Texas. 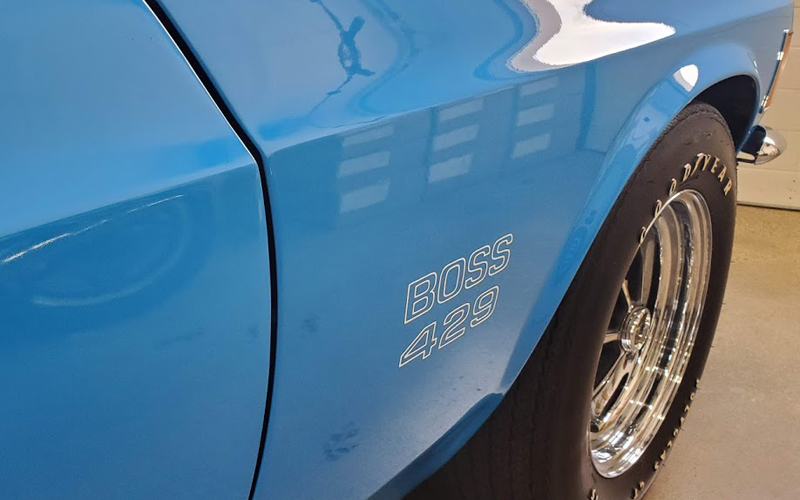 In order to get the KK Boss 429 motor certified for NASCAR competition Ford had to produce a street version of a car that used the Boss 429 big block Semi-Hemi engine. Although Ford raced this motor in the Torino Talladega in NASCAR, they believed they would sell more cars if they put the Boss 9 motor in their most popular seller, the Mustang Pony car, for homologation. NASCAR required that for any motor to be run in NASCAR competition the factory had to sell at least 500 cars with that motor in it for street use. And so the Boss 429 Mustangs were born. While Ford dominated NASCAR in 1969 with the Boss 9 motor, its greatest gift to the collector car market were the NASCAR KK Boss 429 Mustangs.

This elite group of cars were given a special NASCAR identification “KK” number when converted to Boss 9’s by Kar Kraft in Michigan. This one has “KK 429 NASCAR 2481” on its door plate. Kar Kraft had the job of modifying the body and suspension on the Mustangs to accomodate the huge Boss 9 engine. There was a rumor that Kar Kraft shoehorned the massive Boss 9 engine into the tight Mustang engine compartment. But the 429 engine was actually dropped in by Ford at the factory before the cars arrived at Kar Kraft.