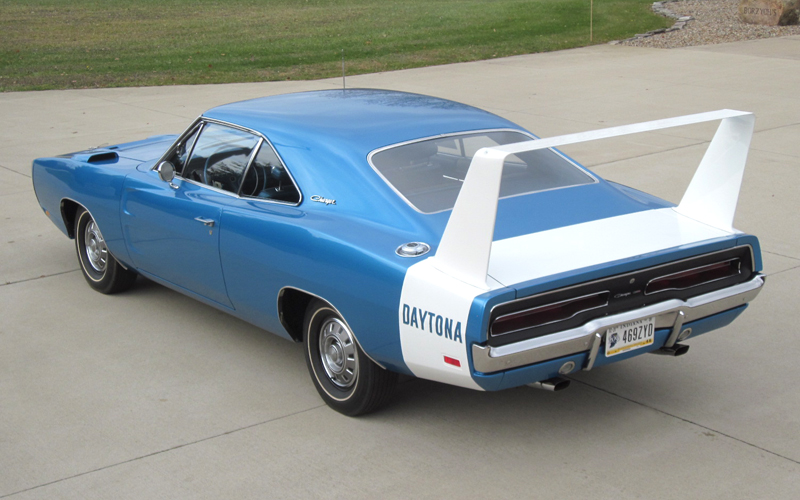 In 1969, when Chrysler asked one of their rocket scientists how to beat Ford in NASCAR racing, his answer can be summed up in one word: aerodynamics. He penned a Charger with a cast aluminum nose cone, retractable headlights and a 2-foot “towel rack” spoiler atop the rear decklid. His design elements created a .28 drag coefficient allowing the resultant 1969 Dodge Daytona Charger to break the 200 mile-per-hour mark on a NASCAR high-banked oval race track. That was a first.

Cars-On-Line’s feature car this week is a 1969 Dodge Daytona Charger. It is being offered for sale by a private collector out of Indiana. (Follow this link to review photos and find out more about the seller.) It is a one-of-one build, according to Mopar experts.

The story on this Daytona goes way back to early 1969. The Zeck Motor Company in Leavenworth, Kansas received a flyer announcing the new Dodge Charger Daytona. The owners son, Danny Zeck, working at his dad’s dealership, spotted the flyer and asked his father if he could order one? His father surprised Danny and said yes, “but no HEMI engine!” Danny got to work and ordered a one-of-one Daytona. They only made 20 of the B5 blue colored Daytona’s and that was the color Danny picked out. He selected the 440 4-barrel engine and 727 automatic transmission with a 3:55 8 3/4 posi rear end. The interior was a nice B7 blue with bucket seats.

Danny waited patiently for the Charger to be made and converted to a Daytona at Creative Industries in Detroit. The Daytona was delivered to the dealership in late August of 1969 when the 1970 models were already coming out. Danny put the 1st 1,000 miles on the Daytona. Then a good customer of the dealership spotted the Daytona parked there and inquired about it. Soon Danny was to discover that the Daytona was sold.

By 1973 there were still only 24,000 miles on the Daytona’s odometer. It ended up being parked from early 1973 till early 1982. That is when the current owner bought it. For the next 26 years, the car remained in storage while the new owner collected rare original parts to restore it.

In 2008, the Daytona went to Troy Angelly Restorations in Eldorado, Illinois for a complete restoration. During this 2,000-hour nut and bolt restoration co-owner Paul Jacobs suggested that the Daytona should be restored to the OE level. This was due to the matching numbers drivetrain, low miles, original parts and all the NOS parts the owner had acquired. The shop gathered as many NOS and original OE parts needed to make this happen.

By October 2009 and the owner picked up his Daytona on the way to the 40th AERO WARRIOR REUNION in Talladega, Alabama. He said, “The Daytona was a show stopper at this event. We were approached by well known car artist David Snyder who wanted to nominate our Daytona for the 2010 Louisville Concours D’Elegance.” That is where he won “Best in Class” for the Aero Warrior category. The Daytona was entered in the 2010 Mopar Nationals OE Certification where it won OE GOLD and was the highest scoring Daytona at that time. Later that year, it was entered in the 2010 MCACN show where it won Concours gold. 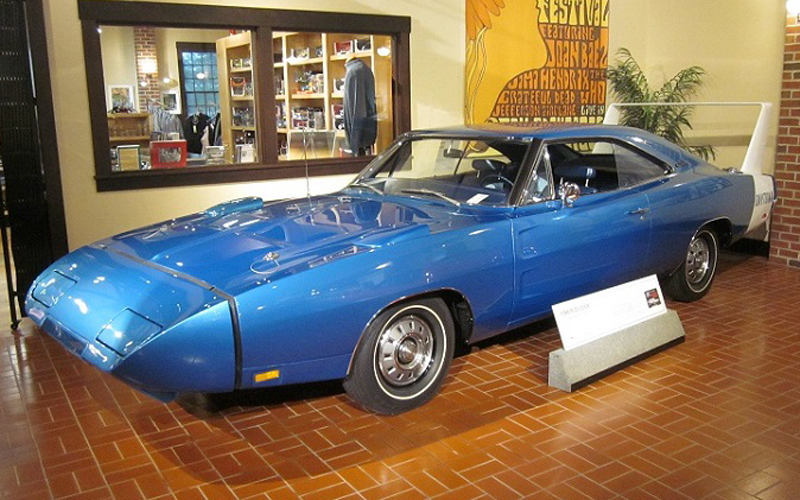 From 2015 to 2017 the Daytona was on display at the Gilmore Car Museum in Michigan. During it’s stay it was featured in an episode of the TV show Car Crazy with Barry Meguiar. In that episode the museum’s director stated that the Daytona was the most significant car in their display.

Here are the options Danny Zeck originally selected for his Daytona: the fold down arm rest buddy seat, AM radio, remote drivers side mirror and tinted windshield. Danny did not add the factory Rally wheels because he intended on installing the popular Cragar mags. So with the fold down arm rest and standard hub caps this is a truly a one-of-one Daytona.

Determined to make a statement in NASCAR for 1969, Dodge came out with the Dodge Charger 500, with aerodynamic adjustments to make the car fast. As good as the Charger 500 was, Ford had completely resdesigned its Ford Torino with an aero fastback (Talladega) body just to compete in NASCAR that year. But even as Ford won 26 races, Dodge countered with its totally redesigned Dodge Charger Daytona. Months of design and testing had been invested in this wild and crazy looking Charger. With an 18-inch fiberglass nose and a 2-foot high rear spoiler, the new Daytona Charger looked more like a race car than a passenger car, and for good reason. It was.

When the 1969 Dodge Daytona and the 1970 Plymouth Superbird crashed the NASCAR party they introduced the kind of aerodyamics that would take advantage of high banked super speedways like Daytona and Talladega. Make no mistake. These were purpose built race cars. Chrysler was the first manufacturer to break the 200 mile-per-hour speed barrier. NASCAR driver Buddy Baker broke the 200 mph mark during test runs at Talladega Speedway in Alabama, March, 1970, with a top average speed of 200.447 mph.

Later that year, Bobby Isaacs set a new world record 201.104 mph, as he won the Daytona 500. Daytonas swept the race, coming in first, second, third and fourth place at the Daytona International Raceway. Isaacs also won the Grand National Championship in NASCAR that year for Dodge.

The sad reality is that the Dodge Daytona and its Chrysler cousin, the Plymouth Superbird, were just too fast for NASCAR. They were so successful that they were effectively banned from NASCAR competition in 1971. NASCAR president Bill France made sure that winged cars would not be able to compete by restricting the engine size in a winged car. They said they feared the winged cars were too dangerous on most of the tracks. The era of the winged car was over as fast as it had begun.

Dodge made only 503 Daytona Chargers. That was the number necessary for homologation under NASCAR rules. There were never that many to sell to the public. That was probably okay, because they were so over-the-top with the huge wing that most new car buyers were scared off by the appearance. Few American cars were so polarizing to the buying public, and that simply adds to its collector car cache. Today collectors can’t get enough of them.

The 1969 Dodge Daytona Charger is the featured car in this week’s Cars-On-Line.com newsletter. Be sure to click through to the newsletter to find out what’s happening in the collector car market. 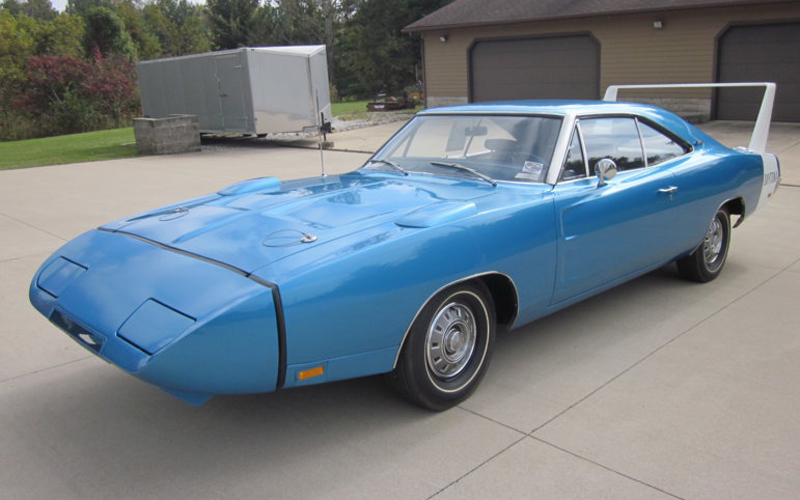