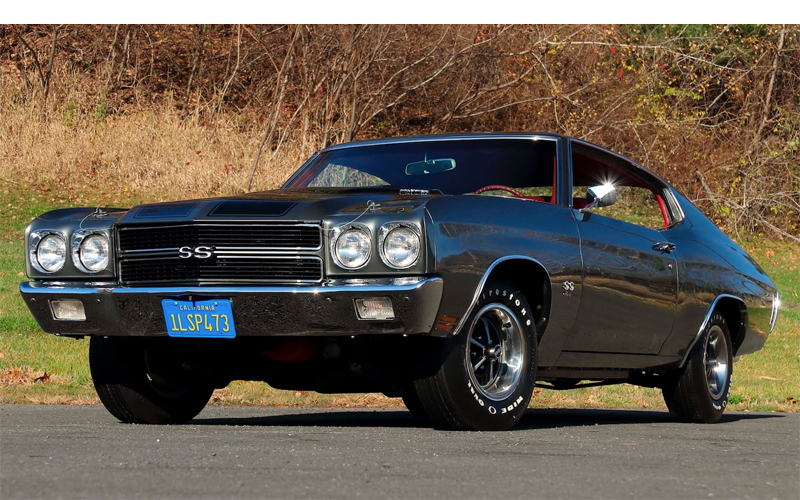 That’s right, this week we have spotted a rare Shadow Gray 1970 Chevelle SS LS6 454 Hardtop in the Chevelle Section on the Cars-On-Line website. With a red interior, it is a color combination you won’t find again. That’s how rare it is.

This week, Verrillo Motor Car Company in Clifton Park, New York listed the rare Shadow Gray 1970 Chevelle SS LS6 for sale. We say it is rare (isn’t any LS6 car rare?) because of the color combination on this one. This Chevelle SS LS6 is finished in an eyecatching combination of Shadow Gray exterior with a red interior and black Super Sport stripes. Click this link to see all the beautiful photos taken by Verrillo.

When it goes down the road it has a beautiful resonant gurgling exhaust note. Back in the day , they said “there is no replacement for displacement.” And the Chevelle LS6 made 450 horsepower with 500 foot pounds of torque from the factory.
Beneath the sheet metal they tell us it has a matching numbers LS6 454, the monster big block that always won on the street. The GM factory rating at 450 horsepower and 500 ft pounds of torque comes thanks to an 11.25:1 compression ratio, solid lifter camshaft and big port heads. It takes a stout transmission to manage that much power so this one came with the heavy duty Muncie M22 Rock Crusher 4-speed manual transmission. A Positraction axle ensures even distribution of power to the Firestone F70x14 white lettered tires mounted on SS wheels. What a site for sore eyes.

Built at the Van Nuys plant, this Chevelle SS was delivered new to Lamb Chevrolet in National City, California. It has been treated to a comprehensive frame off restoration to bring it to its current condition.

Inside the Chevelle are Strato bucket seats split by the optional console. It also has the Rally gauge package, in-dash special instruments with a tachometer and clock flanking the 120 mph speedometer. The three-spoke steering wheel is what is referred to as a “cushion rim” mounted on a Comfort tilt column.

In early 1970, Hot Rod magazine tested a Chevelle SS LS6 very much like this one and pulled off mid-13 second quarter mile ETs on the stock biasply tires, a remarkable feat considering how much torque the Wide Ovals had to endure.

The LS6 engine, like the one in this Shadow Gray 1970 Chevelle SS LS6 454, produced 450 horspower, the most powerful factory produced motor available at the time. Fed by an 800-cfm Holley four-barrel carburetor on an aluminum manifold, it created 11.25:1 compression with solid lifters, four-bolt mains, forged steel crank and connecting rods, forged aluminum pistons, and deep-groove pulleys.

No production engine ever had a higher factory horsepower rating. It created over 500 foot-pounds of torque. Factory LS6 Chevelles were known to do sub 14 second ET’s at over 100 mph. Tested by Super Stock and Drag Illustrated Magazine in 1969 and 1970, the solid lifter LS6 Chevelle ran a faster quarter-mile than a Hemi Road Runner by a little over one-tenth of a second. Was one faster than the other? That depends on the driver. But tests by Car Craft and Hot Rod Magazine prove that the Chevelle LS6 was very much at the same level as the Hemi Mopars.

The new Chevelle for 1970 ran on a 112-inch wheelbase with a wider track and big polyglas tires. That meant it could handle almost like a Camaro and accelerate like a rocket. With the big cowl induction hood, it could breath better than a standard muscle car. You’ll know the sound of an LS6 Chevelle 454 when you hear one.