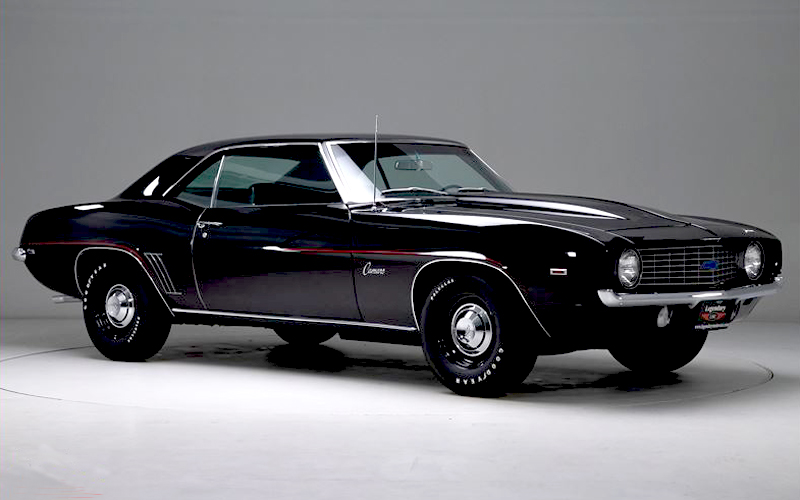 Most muscle car collectors have never seen a Tuxedo Black 1969 COPO Camaro like this before. This special COPO Camaro was ordered with Code 10 Tuxedo Black paint, black interior and red pinstripe from the factory. As a rule, COPO Camaros were purchased by fleet order from Chevrolet dealers. But this one was special ordered by a private party buyer through Maxton Chevrolet in Columbus, Ohio. This particular color combination makes it very rare and desirable for collectors today.

Everything about a COPO (Central Office Production Order) Camaro had to do with performance. Since 1969 was the genesis of COPO Camaro production at Chevrolet, those produced in 1969 are among the most sought-after Camaros ever built. Unlike many performance cars of the time, these Camaros carried absolutely no external identification, so they would have been what collectors call “sleepers.” If you pulled up next to one at a stop sign there were no emblems on the car to tell you it had an L72 427/425 hp Corvette engine hidden under the hood.

This Tuxedo Black 1969 COPO Camaro is being offered for sale this week at Legendary Motorcar Company, one of the world’s leading muscle car dealers. They say it received a “no-expense” spared exacting rotisserie restoration, the entire car having been gone over and restored from top to bottom. (Tap this link to see dozens of detailed photos on the Legendary Motorcar Company web page.) It is incredible to view the attention to detail on the undercarriage. Many original and NOS components were used throughout the restoration to ensure it is correct to factory original condition. The ad photos take you under the cowl hood where you find the L72 427/425 hp COPO motor as it came from Chevrolet. The transmission is a Muncie M-22 Rock Crusher 4-speed transfering power to the factory 4.56 12-bolt rear end. Options include an AM radio, door edge guards, power disc brakes, cowl induction hood and Rallye wheels with white stripe biasply tires.

Once completed this COPO was shown at the American Camaro Association Nationals in the Legends Certification judging system.  It achieved level 3 and received “Top Flight” certification. This COPO is truly for the collector who appreciates the highest level of restoration quality.

Legendary Motorcar Company says the COPO comes documented with Camaro Nationals Legends judging sheets, ownership history, affidavit from the original owner, period photographs and more. This COPO Camaro is truly an exceptionally restored example that would be the highlight of any collection. Rarely do cars come up for sale that have been restored to this level of quality, in this highly sought after color combination with these options. It is the trifecta of collector car finds.

When this 1969 COPO Camaro L72 427/425 was born it was never advertised to the general public, nor was it well known among Camaro enthusiasts of the day. In fact, the big block monster muscle car was never even imagined by Chevrolet. It was, indeed, the brain child of a performance minded Chevrolet Product Promotions manager named Vince Piggins. He the scheme to use GM’s Fleet Purchasing system, the Central Office Production Order system, to have the factory build 427 big block muscle cars. Today, these COPO Camaros are much coveted by muscle car collectors.

General Motors had a corporate policy against installing engines over 400 ci in anything but full-size cars and Corvettes. That frustrated many at Chevrolet, including Pete Estes, Chevrolet’s vice president, who understood the need for fast cars to feed the hunger for performance in the Baby Boom generation which was just coming of age. Chevrolet Product Promotions manager Vince Piggins found a way to circumvent the engine ban for certain buyers by using the Central Office Production Order, or COPO program. Normally reserved for fleet orders, Piggins was able to use COPO 9561 to get Camaros built on the factory assembly line equipped with the L72 427/425 horsepower special high-performance big block.

You can’t imagine how that changed things for drag racers. With the L72 427 Turbo Jet 425 horsepower big block in a little Camaro, you could put the Muncie 4-speed in any gear and smoke ’em via a 12-bolt GM rear end. And that was all from the factory. It saved so much build time for hot rod shops that they were taking orders on them to make them race ready.

Only about 1,015 COPO Camaros like this one were thought to have been built. This particular 1969 COPO Camaro L72 427/425 is the epitome of what muscle car collectors look for in a top level collector car. It has all the credentials of a serious high dollar muscle car find.

This week you will find this desirable Tuxedo Black 1969 COPO Camaro in the Camaro Section of the Cars-On-Line website.