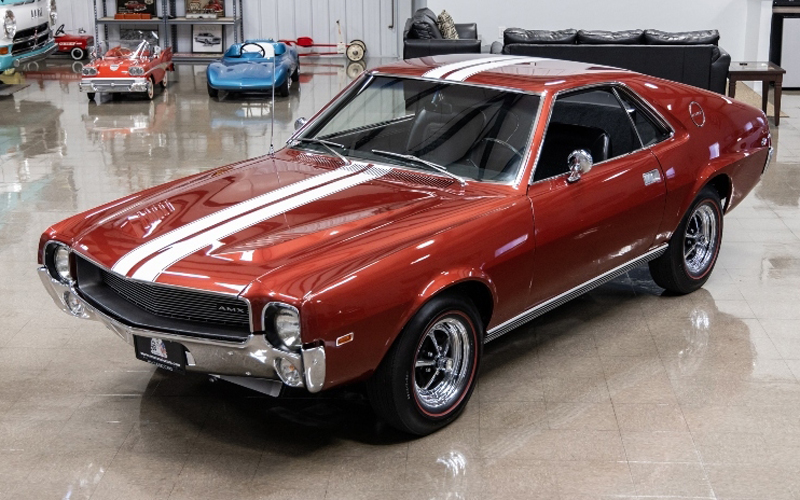 A show quality 1968 AMC AMX called The Famous AMX is being offered for sale for the first time here. The car has been honored in numerous TV shows and magazine features over the past few decades. Famous “car guy” personalities such as Jay Leno and Chip Foose have had contact with this famous AMX as well. Only lightly restored, the AMX retains all of its muscle car originality. This car has what collectors like to call “provenance”, in other words, a great story.

You will find this car being offered for sale this week on the AMC Muscle Car page of the Cars-On-Line website. MS Classic Cars, a classic car dealer in Seekonk, Massachusetts, has had it in their shop since September getting it ready to sell. (Follow this link to see over 100 photos in high resolution detail.)  When word gets out that this incredibly original example is being offered for sale it will send ripples through the world of AMC enthusiasts.

The color on this 1968 AMC AMX called The Famous AMX is Calcutta Russett, rare and desirable in its own right. Then with only 53,347 original miles, it has been restored to show quality standards. It retains all of its original sheet metal with the exception of the rear quarters. A beautiful black interior is mostly original, and the  painted engine compartment is nicely detailed throughout. The car is powered by the original matching numbers 390 V8 with rare Group # 19 Performance Cam and 3-speed automatic transmission. This car is an American Motors Owners Association (AMO) National Concours Winner and has won the Junior Gold Award as well. It’s also a multiple Concours D’ Elegance award winner, and MS Classic Cars tells us that all the awards are included in the sale.

It is not a surprise that the 1968 AMC AMX started life in the hands of two brothers who cherished it and set out to keep it in pristine condition and never sell it. After one of the brothers did not return from Vietnam, the other brother kept the car until his death in 2005. The brother’s widow sold the car to the second owner, a Georgia collector named James Graubard. The car only had 45k original miles. James had some light restoration work done on the car during the eleven years he owned it. He also showed the car widely and it became nationally known. 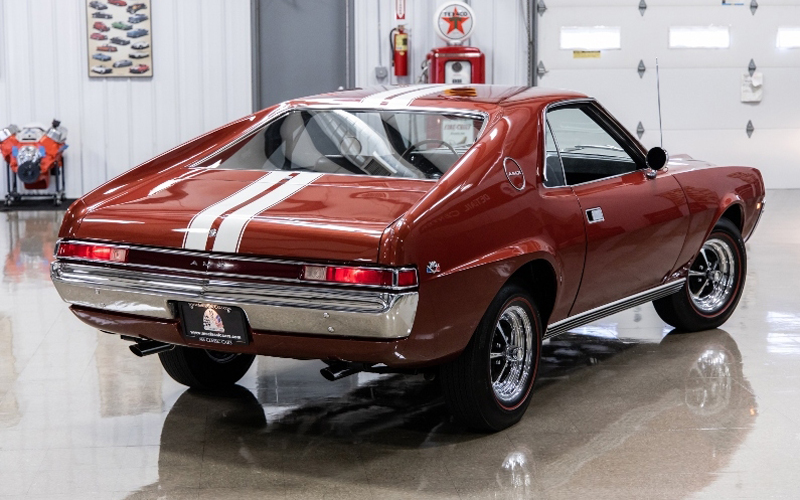 At the 2009 Hilton Head Island Concours D’Elegance, James won a Palmetto Award with his AMX. Later that year he took the car to Nashville where it was the subject of a Spike TV Powerblock episode which aired in April of 2010. The whole show was about the 1968 AMC AMX called The Famous AMX. TV personality Jay Leno was the guest host of the 2011 Boca Raton Concours D’Elegance. The car won the People’s Choice Award there, and subsequently Leno featured it in a video on his website, Jay Leno’s Garage. James added a total of 7,775 miles to the car.

In 2016, he decided to sell the car and MS Classic Cars purchased it. They immediately sold it in April of 2016 to a customer off the showroom floor. The gentleman lived in New Hampshire, where it became part of his collection with 52,772 original miles. He added a total of 544 miles on the car before selling it back to MS Classic Cars in September of 2020. It now has just 53,316 original miles. This is the first time they have advertised it on the national market.

Marc Schiliro, owner of MS Classic Cars, did a full walk-around video on his 1968 AMC AMX. He notes some points of interest on the car.

Schiliro is the one who has nicknamed it “The Famous AMX.” And he’s not wrong.