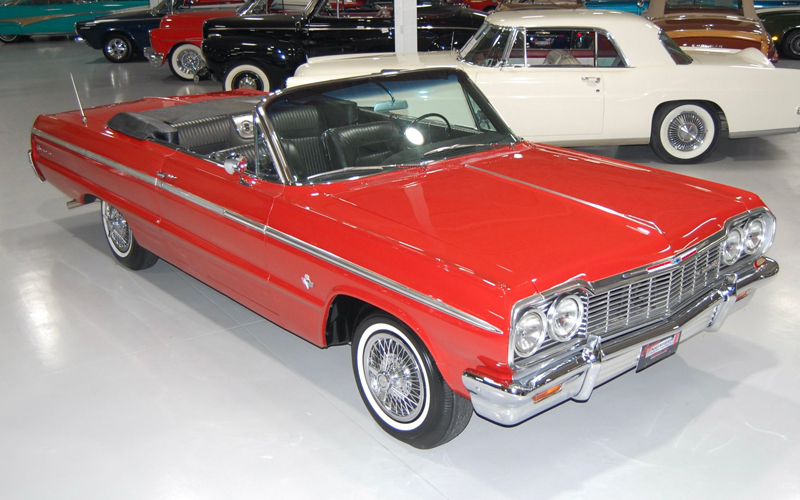 People talk about the 1964 Pontiac GTO as being the first American muscle car. But I disagree. The top dog muscle car that year was the 1964 Chevrolet Impala SS 409/425 Convertible. There is just no refuting it.

According to test reports at the time, the ’64 Impala SS 409 would go 0 to 60 mph in 6.1 seconds. It was consistently recorded doing 14.9 seconds in the quarter-mile. And the best part about it was that nothing handled better than a ’64 Impala SS on the road.

This week, Ellingson Motorcars in Rogers, Minnesota, listed a 1964 Chevrolet Impala SS 409/425 Convertible to satisfy your every muscle car dream. This one is well worth looking into. (Follow this link to review the ad on their website.)  They say it has undergone an extensive frame-off restoration that looks brand new. Under the hood is its original “numbers matching 409 ci Turbo-Fire V8 with dual Carter AFB 4-barrel carburetors, and a high lift cam, enough extra to push out 425 horsepower, and create 425 foot-pounds of torque. The 409/425 hp engine was a $484.00 option, the most powerful of the three 409 engines offered by Chevrolet that year.

The 1964 Chevrolet Impala SS Convertible was considered the plushest and sportiest model offered by Chevrolet at the time. Impalas were the best selling Chevrolets that year accounting for more than half of all Chevrolet sales. Since the Impala SS had top-of-the-line status in 1964, it might come with plenty of options, including the chrome engine dress-up kit, tachometer, power steering and dual outside rear view mirrors.

The 409 was exclusive to the Impala model for 1964. Also in 1964, the SS Impala became its own model under the Chevrolet lineup. In prior years the SS package was an add-on option. Chevrolet called it “jet-smooth luxury!”

With an M21 4-speed manual transmission and a G80 Positraction rear axle, this 1964 Chevrolet Impala SS 409/425 Convertible is fun to drive and the rubber will stay planted to the pavement. It is a well-optioned example, equipped with power steering and power brakes. The exterior on this ’64 Impala SS will impress you, having undergone a fresh repaint in its original Ember Red (code 922) color. The black vinyl power convertible top looks brand new and goes up and down with a push of a button. And wait till you inspect the photos of the undercarriage. (Click here to look at the ad photos now.)

The exterior chrome and aluminum has all been refurbished or replaced, all of which shows exceptionally well. New BF Goodrich Bias-Ply Tires with a 1″ whitewall along with full wire wheel covers complete the exterior look of this Ember Red beauty. The black vinyl Super Sport bucket seat interior with center console is correct for the car (code 815) and presents extremely well. SS models featured an all-vinyl interior with bucket seats and center console. The padded dash and steering wheel also look brand new and do not disappoint. The power windows are in nice shape too, going up and down with the simple push of a button. Dual side chrome mirrors also add to the look of the car and make backing into a tight space much easier.

Click the video window to hear the full story on this interesting 1964 Chevrolet Impala SS 409/425 Convertible:

The 1964 Chevy Impalas and Bel Airs were good handling cars in 1963 and 1964. And, if you had power steering, the steering ratio would surprise you for a car that big. GM took the big 119-inch standard-wheelbase chassis, added sporty styling touches, and offered options designed to enhance performance and handling. Equipped with handling options like stiffer springs and shocks, sintered metallic brake linings, four-speed gear box, and ultra-quick power steering, the ’64 Impala SS was the best performance car in Chevrolet history up to that time. It’s rear axle location with four, rather than three, links made it one of the best handling muscle cars of its day. 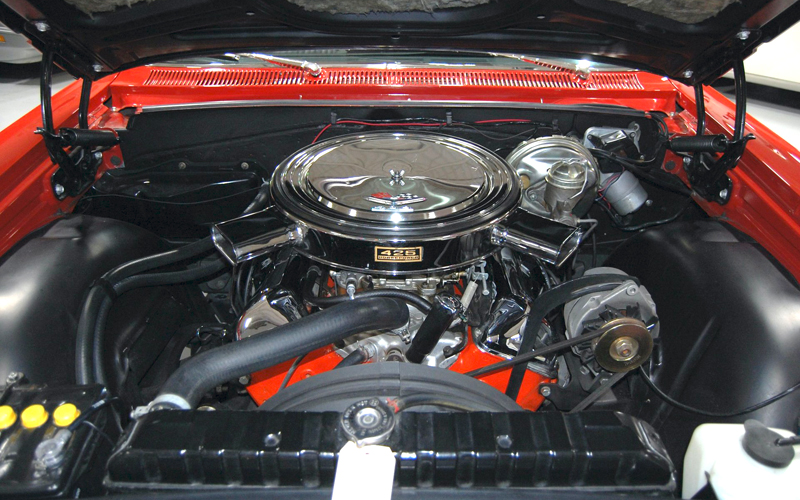 The Standard Catalog of American Cars says there were 8,684 Impalas built with the big block 409 engine.

Looking for an original 1964 Chevrolet Impala SS 409 Convertible? How do you know if it is real? For 1964, the Impala SS became its own model line for Chevrolet. So you can check the VIN number on the door post and if it has the 41467 in the first five numbers you are on the right track. That signifies an SS V8 convertible. Then you can check the trim tag on the cowl for further verification.

There were three versions of the 409 big block motor for the Impala SS in 1964. The base 340 horsepower option came with hydraulic valve lifters; the 400 horsepowr version came with a single 4-barrel carburetor; and the 425 horsepower dual-quad 409 also had solid lifters.
Only half the number of 409 powered V8 Impalas were ordered in 1964 compared to 1963. So the 1964 409’s are much harder to find, even though the 1963’s are coveted by collectors.

If you’re looking for the nicest 1964 Chevrolet Impala SS Convertible with a numbers matching 409 and 4-speed, you simply must check this one out.