The Baldwin-Motion Camaro is a mythical muscle car from the late 1960’s and early 1970’s. They are so rare that they you will never find them on the public market for sale. That is until today. A 1969 Baldwin-Motion Camaro Phase III 427 was just listed for sale on the Cars-On-Line website. Its presence on the collector car market will send a ripple through the muscle car community.

A Baldwin-Motion Camaro today will bring more money than any of the Super Car Camaros of the muscle car era … more than a legendary Yenko, Berger or Nickey Camaro. That is because only seven 1969 Phase III 427 Baldwin-Motion Camaros were ever built by Joel Rosen back in the day. This is the only one that came with an automatic HD TH400 transmission, and it was the only one ordered in the Dusk Blue color. It has been written about sparingly over the years. (Follow this link to view the online ad.)

Ordered in October of 1969 at Baldwin Chevrolet on Long Island, it took until February of 1970 for Motion Performance to complete the work. Evidently the car had all the top end speed equipment of the day. The options list is incredible: “Superbite” shocks, “ET” traction bars, “Inglewood” wheels, “Sun Super” tach, “Mr. Gasket” air cleaner, “Mallory” coil, and more.

By the time the owner took possession of the car it was the one to beat on any track it showed up at. The current owner says he has loads of paperwork to prove the work Motion Performance did on the car. (Documentation can be seen in the ad photos online.) The seller has the Pro-tecto plate and work orders from the original owner, plus a letter of authenticity from Joel Rosen. Few Baldwin Motion cars have this type of extensive paperwork.

It is so authentic that when Highway 61 wanted to make a 1:18th scale diecast of a Baldwin-Motion Camaro they chose this one as the model. (Also seen in the photos.)
There were two different hoods you might have gotten from Motion Performance in 1969. You would either have had the more common 1967 Corvette stinger hood which was first used by Dickie Harrell on a 427 Camaro; or you might have gotten the 1968 Corvette big block hood. Both were used on Motion Camaros that year.

They say a MOTION Phase III car would be guaranteed to dyno in at 500 horsepower and to run at least an 11.0 ET through the quarter-mile.

Joel Rosen was a nationally known drag racer, street racer and hot rodder from Brooklyn. One day he discovered what would happen if you popped a big block 427 into a Camaro. That fateful day started an aftermarket empire for him that made MOTION Performance an internationally known brand. In 1966 he and Marty Schorr set up shop down the street from Baldwin Chevrolet on Long Island. With the help of the Chevrolet dealership they would sell race ready muscle cars with written guarantees to do specific times at the track.

Some famous Chevrolet dealerships throughout the United States would race prep high performance muscle cars for competition. Yenko Chevrolet in Pennsylvania, Nickey Chevrolet in Chicago, Berger Chevrolet in Grand Rapids, Michigan, Dana Chevrolet in Dana Point, California and Fredd Gibb Chevrolet in LaHarpe, Illinois were the most famous. Then there was Baldwin Chevrolet in New York. They were maybe the most famous of all because of their connection with their neighbor MOTION Performance, a company Joel Rosen founded with his sidekick Marty Schorr.

Starting in 1967, Baldwin-Motion offered SS (425-hp) and Phase III (500-hp and up) big-block Camaros, Novas, Chevelles, Corvettes and Biscayne race cars for sale. Cars were sold at Baldwin Chevrolet or Motion Performance, converted by Motion and financed and delivered by Baldwin.

Rosen would produce a new car per each customer’s specifications. The first question he asked was, ” … how fast do you want to go?” He would then negotiate a price and guarantee an ET that the car would do. We have seen ads that Rosen published offering a written guarantee that a car would produce a predicted elapsed time at the drag strip or he would refund the work done on the car. On the occasion that the new owner could not achieve the ET when he went to the track, Rosen would send out a driver to show that it could be done. Rosen has said that he never had to pay a refund.

Although every car that Rosen built was a little different, most of his Phase III cars had identifiable items. He used the famous “fly eye” air filter and CP finned aluminum valve covers with MOTION emblems . The ignition systems consisted of Mallory products such as dual point distributors and the Mallory coils. They say the intakes were almost always Edelbrock.

Rosen further would “sign” his MOTION cars with decals. There would be a MOTION Dyno Tuned decal and a MOTION Performance decal on each car. The MOTION Performance parts decal was usually located on the bottom center of the rear window or on the inner fender. The MOTION Dyno Tuned decal was located on the lower right of the windshield. You might also find a MOTION Supercar Club decal, or even a Mr MOTION decal on the car.

To read about other Camaro “Super Cars” such as Yenko Camaros, Berger Camaros, Nickey Camaros and more, follow this link to other articles we have published, or do a search in the upper right corner of this page. 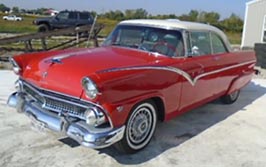