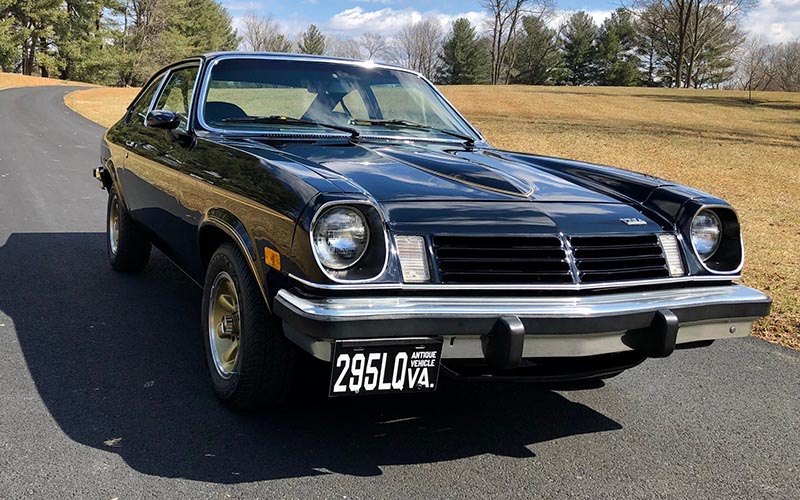 Barely remembered even as a footnote in automotive history, the Chevrolet Cosworth Vega was one of the most amazing products to come out of the 1970’s at GM. They attempted to put racing technology into a mundane economy car. But, alas, the car buying public was just not ready for a car  ahead of its time. Produced for only two short years, the Cosworth Vega made history as having Chevrolet’s first 16-valve twin-cam engine, the first factory installed stainless steel exhaust headers and was the first Chevrolet to use electronic computer controlled fuel injection.

Although these cars do not often surface in today’s collector car market, a 1975 Chevrolet Cosworth Vega, a short lived breed of innovative performance car, will cause a stir in the collector car market this week. It was announced that a pristine example of the Cosworth Vega is being offered at the Raleigh Classic Auction in Youngsville, North Carolina next month, April 30-May 1, 2021. The owner says he believes that his beautiful Cosworth Vega has just 2,845 actual miles.

It has the 122 ci inline 4-cylinder engine and a 4-speed transmission. The interior looks as new. (Be sure to follow this link to review photos in the auction promo.) With so few miles on the car it is likely that it was being preserved by its owner for collector value. It received new paint in the 1990’s. The current owner has replaced the cooling system from the radiator to the heater core, fuel pump and filter, and four shocks. Otherwise it is believed this car could be a very original low-mile example. Auction goers will have a chance to inspect it next month. This car was number 1,678 out of 2,061 Cosworth Vegas built in 1975.

Giant big block cars were going the way of the dinosaur as Chevrolet looked to forge new ground in the performance car market in 1975. A factory aluminum 16-valve electronic fuel injected engine from Cosworth opened the eyes of many a young racing fan when the Cosworth Vega was announced by Chevrolet that year. After all, the new Vega power plant was designed by Cosworth, a legendary race car builder in England.

Chevrolet had come out with their H-body platform for the Vega in 1971. It was meant to be an economy car offering. But GM Vice-President John Delorean thought the Vega needed a sports car persona, so he sent one of his scouts out looking for a way to spice it up. They ended up talking to Cosworth, a British race tuning company with credentials in Formula 1 racing and many Indy car wins. Cosworth happened to have a twin-cam racing head that they thought might just fit the Vega 2.3 liter engine.

A considerable effort was made to make the Cosworth cylinder heads work with the Vega  4 cylinder motor. With the intention of making a race inspired version of the aluminum 4 cylinder, they first had to be detune it to 2.0 Liter. More than one rework was needed to comply with the EPA. That was further complicated by new EPA revisions which came out for 1975.

Cosworth helped Chevrolet develop a 16-valve aluminum cylinder head. The crankshaft and connecting rods were made of forged steel. By March of 1975 Chevrolet had begun building the Cosworth Twin Cam Vega, with 8.5:1 compression. The final product was rated at 110 horsepower from the factory and could boost 107 foot-pounds of torque at 4600 RPM. The engines were hand assembled at the Tonawanda Engine Plant in New York. It used electronic fuel-injection featuring four injector valves and transistorized electronic ignition. These special motors were sent to Lordstown, Ohio where all Vegas were assembled. The Cosworth Vega cars had their own assembly line.

Depending on which magazine was testing the Chevrolet Cosworth Vega in 1975, these race tech dream machines would do 10, 12 or 14 seconds in the quarter mile. Kevin Duckworth, a Cosworth engineer, was able to tune a few Cosworth Vegas to 270 horsepower. Those who saw them race said they were amazingly quick. No wonder, with a car so light weight.

All of the Cosworth Vegas produced in 1975 came in black with gold pin-striping and 13-inch gold aluminum wheels. The Cosworth Twin Cam logo appeared on the front fenders and on the rear valance.

Although the interior was a clone of the Vega GT models, they did have an 8,000 RPM tach, “Cosworth Twin-Cam Vega” lettering on the steering wheel and a special numbered plate on the dash. No Cosworth Vegas were equipped with air conditioning, power steering or power brakes. The Cosworth Vega only came with a floor-mounted 4-speed. Front disc brakes were standard features, and it was kept on track by front and rear stabilizer bars. Although early editions of the 1975 Cosworth Vega came with the Vega’s four-link axle, it was shortly replaced with the Chevrolet Monza’s torque arm rear suspension.

To order a Cosworth Vega in 1975 you would pay almost as much for one as for a Corvette. The average price was nearly $5,900. Chevrolet says there were 2,061 twin-cam Vegas built that first year.

The Cosworth Vega never sold well enough to fullfill the hopes of GM management. They expected to sell 5,000 units a year. Although a light restyling was done in 1976, the Cosworth Vega was not offered in the 1977 lineup. Only 3.508 units sold combined in 1975 and 1976. A great idea just might have been a little ahead of its time.

But those limited numbers are what make a collector car valuable. Buyers who attend the Raleigh Classic Auction in Youngsville the last weekend in April may find a diamond in the rough when this one crosses the auction block. What do you suppose it will sell for?