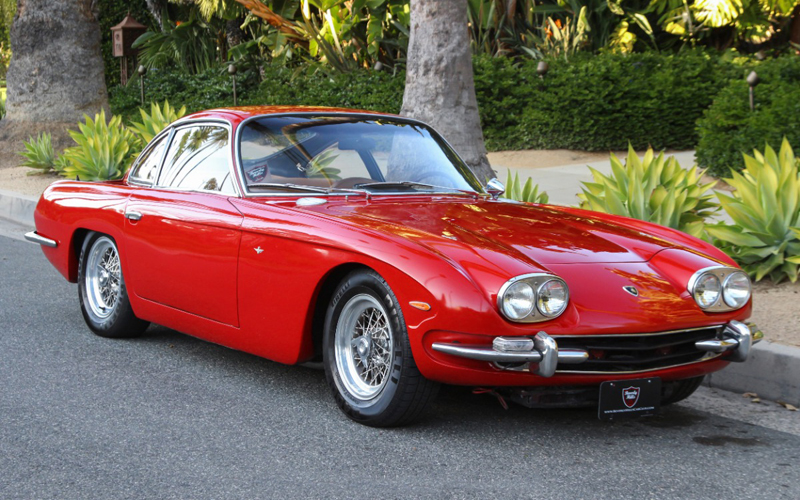 Out of a Clash of Titans came an elegant grand touring super car called the Lamborghini 400 GT 2+2. The egos of two larger than life personalities back in 1962 spawned a competition that still exists today. Lamborghini v. Ferrari. That’s the story about which they should make a movie, don’t you think?

When a 1967 Lamborghini 400 GT 2+2 was listed for sale in the Cars-On-Line Lamborghini Section this week, it reminded us of how this elegant grand touring car came about. The story is the genesis of Lamborghini, the company that did much to bring the exotic sports car into full bloom under the symbol of the Golden Bull.

As the story goes, Ferrucio Lamborghini, a tractor manufacturer in Italy, owned two Ferraris. He was unhappy with the performance of a clutch in his Ferrari 250GT, so he proceeded to visit Maranello to tell Enzo Ferrari about it. The Ferrari founder did not take kindly to Lamborghini’s suggestion that his clutch did not perform well. A story in the British magazine, Thoroughbred and Classic Cars, quotes Ferrari as saying to Lamborghini, ” … you may be able to drive a tractor, but you will never be able to handle a Ferrari properly.”

At this, Lamborghini determines to build his own grand touring cars just to spite Ferrari. It was fortunate for him that he was able to gather the financing to create Automobili Ferruccio Lamborghini S.p.A. in 1963. Just 4 months after his confrontation with Ferrari, he unveiled the Lamborghini 350 GTV at the Turin Motor Show.

Even more fortunate was his ability to recruit Giotto Bizzarini, who left Ferrari after a falling out with management there. Lamborghini had already been making V-12 engines for his tractors. Bizzarini fine tuned his sturdy V-12’s so they were better than Ferrari’s.

From 1966 through 1968 the Lamborghini factory in Sant’Agata Bolognese produced the successor to the early 350 GT’s, the Lamborghini 400 GT 2+2. Only 247 400 GT’s were produced during that time including 224 GT 2+2’s. These cars are extremely desirable to car collectors today.

The example you see here has been listed for sale at Los Angeles based Beverly Hills Car Club. They tell us it is the ultimate Italian sports car, more valuable than many of the most prized Ferraris of the same era. (Follow this link to review dozens of detailed photos and copies of the maintenance records.) An opportunity to own one does not present itself very often. (Two others were offered for sale this year in the Lamborghini Section of the Cars-On-Line website. One is sold, and one was also just recently put up for sale.) Usually, a concours sports car collector will have to bid competitively at auction to have a chance to own one of these early exotic super cars. But this one is available now at Beverly Hills Car Club.

This one is Andrameda Rosso in color with an elegant sand beige leather interior. It comes equipped with a Lamborghini 5-speed  manual transmission, Weber carburetors, 3-spoke wood steering wheel, power windows, toggle switches, 4-wheel disc brakes, and the desirable Borrani wire wheels. In one of the ad photos you can see that the Jaeger odometer shows 68,541 (presumably in kilometers). The tumblers are dead straight across. Also to be seen in the photos are copies of receipts totaling over $76,000 in minor and major services. This is an excellent original California car and it would make a strong addition to any classic car collection. At its current offering price it is a great discount to the average values on these cars. A recent appraisal of a similar car is valued at over $500,000.

The stylish Grand Tourer was designed by Carrozzeria Touring of Milan and shared the same 2,550 mm wheelbase as its predecessor, the first Lamborghini production car, the 350 GT. In comparison, the 2+2 version featured a roofline 65 mm higher to accommodate the rear passenger headroom. Overall the profile still retained the original shape. The Bizzarini-designed 3.5 liter DOHC V12 engine was increased to 3,939 cc, which raised the power output to 320 hp and resulted in a 0-60 mph time in under 7 seconds. With such incredible power, fully independent suspension, 4-wheel disc brakes, and lavish leather interior, the 400 GT 2+2 was one of the most coveted Italian Grand Tourers of its era. With the state of the art 5-speed syncromesh transmission, it outdid Ferrari at its own game.

It is said that the 400 GT is the purest expression of what Ferrucio Lamborghini was aiming for in building his own Grand Touring car. Collectors today feel that the 400 GT and the Islero which followed were the two early cars which captured the Touring Superlegerra culture.

Powered by a 3.9-liter, quad-cam V-12 engine—outfitted with six Weber twin-throat carburetors—the Lamborghini GTs of the mid to late 1960s were known to be a better motor than Ferrari could build at the time. The 5-speed, syncromesh transmission was also proprietary to the Lamborghini, no other car, except possibly a Porsche, could compare.