It was the most memorable moment in Indianapolis 500 history. Remember when Linda Vaughn, a spokes model for Hurst Performance, made her debut into American folk culture? She captured our attention by striding atop a platform on the back of the 1972 Hurst Oldsmobile Pace Car Convertible. For two laps around the Indianapolis Motor Speedway she posed with a giant Hurst shifter and had the attention of every race fan in America. That is an image forever imprinted in the minds of anyone who saw the Indianapolis 500 that year.

It was the 56th Annual running of the Indianapolis 500 race and it was the first time Hurst Performance Products (or any other non-auto manufacturer) had ever produced a car to pace the race at the Brickyard. A model named Linda Vaughn stood on a platform off the back of the 1972 Hurst Oldsmobile Pace Car Convertible hugging a giant replica of a Hurst shifter for the warmup lap of the race. The Hurst promotion was so memorable that Linda Vaughn has become a legend in the collector car community. Her status as First Lady of the Motorsports is well established. (Follow this link to view film footage of Linda Vaughn and the 1972 Hurst Oldsmobile Pace Car from the GM Heritage Center.)

This 1972 Hurst Oldsmobile Pace Car Convertible is one of the promotional cars issued to Oldsmobile dealers to draw buyers into their showrooms. The W45 on the cowl tag indicates that this is one of only 130 convertible pace cars produced by Hurst that year. Currently being offered for sale at Ideal Classic Cars in Venice, Florida, the Olds Pace Car convertible is featured in a video walk-around inspection. See all the decals and badging up close.

This beautifully preserved Hurst Olds Pace Car came with power steering, power brakes, power windows and a power top. The numbers matching 455 ci big block motor had functional Ram Air induction and factory air conditioning. The standard Turbo-Hydramatic 400 transmission came with the Hurst Dual-Gate shifter. It also has an outside thermometer mounted on the driver’s side just in front of the side mirror. (Click this link to review the Ideal Classic Cars ad page and see dozens of detailed photos.)

The appearance of Linda Vaughn was unforgettable, but so was the display of 33 Hurst Oldsmobile Pace Car convertibles parading around the track on race day. Yet, that memorable day would never have happened except for a quirk in Indy Car history.

In 1971, a crash occurred when Dodge dealer Eldon Palmer was driving the 1971 Dodge Challenger Pace Car at the end of the warm up lap. When someone moved his pylon marker, Palmer missed his braking reference and he was unable to stop the car in time and crashed into the stands injuring 19 people. Automobile manufacturers were worried about liability issues after the crash of the 1971 Indy Pace Car entering the pit area. So Hurst Performance Products grabbed the opportunity to promote their business with an aftermarket conversion of a 1972 Oldsmobile 442 W30 Convertible. George Hurst was an opportunist and a talented promoter for his Hurst Performance Products company. When he contracted to provide the Indianapolis 500 Pace Car for 1972, his company became a buzzword in the automotive lexicon. It was the first time the Indy 500 was not paced by an American automobile manufacturer. They added the Hurst colors and a Hurst performance package to an Oldsmobile 442, and the rest is history. 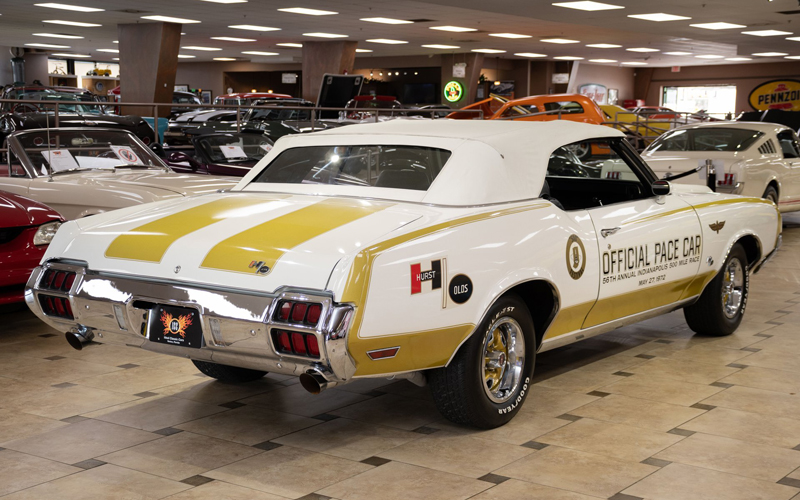 Beyond the colorful exterior, a functional W-25 Ram Air hood, Turbo Hydra-Matic 400 transmission with Hurst dual-gate shifter and pace car badging, make this Hurst Oldsmobile Indy Pace Car stand out. A Hurst-installed aluminum intake manifold and special high lift camshaft made up for the fact that Oldsmobile had detuned the big block 455 to 270 hp. It was powered by a 455 big block, detuned from previous years to meet new emissions standards and to use the new unleaded gas.  Equipped with disc brakes up front, it featured a Rallye suspension, white lettered Goodyear G60X14 Polysteel tires and Super Stock III Rally wheels.

The record books say 629 Oldsmobile Indy Pace Car editions were produced for 1972. Most of them were 2-door hardtops. This is one of only 130 Hurst Olds convertible Pace Car editions. They were sold at Oldsmobile dealers across the U.S. that year. The one you see here is being offered for sale this week at Ideal Classic Cars in Venice, Florida.

Everything about the 1972 Hurst/Olds Indy Pace Car is rare and unique in automotive history. Oldsmobile discontinued making a convertible model for the Cutlass at the end of the 1972 model year.

The 455 ci big block engine was detuned down to 270 horsepower for 1972 because of emission controls and the use of unleaded gas. The Hurst Oldsmobile Pace Car featured the W30 package and a Rallye suspension. It is estimated that the Hurst edition of the pace car created 300 horespower. Oldsmobile discontinued making a convertible model for the Cutlass at the end of the 1972 model year.

While there are many replicas and clones out there on the collector car market, it’s easy to tell a real Hurst/Olds pace car by the “W45” code stamped onto the cowl tag,