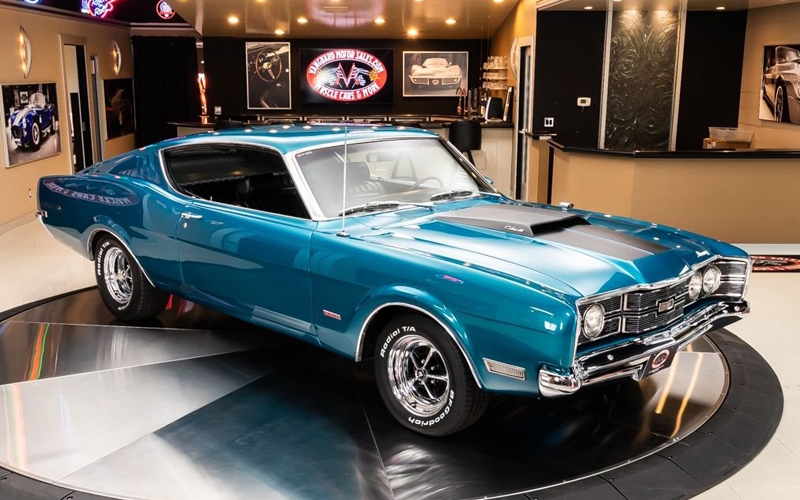 Lost in the maze of great American muscle cars, Mercury sometimes is forgotten in the shadow of its Ford cousins. A great car like the 1969 Mercury Cyclone CJ R Code was a blip on the American car buyer’s radar. A one-year only product, it may be Mercury’s finest muscle car offering.

Just sit in this car and turn the key. Immediately the big 428 CJ rumbles into action with the staccato of a dual exhaust pounding the air. This is what muscle cars are all about.

This week, Vanguard Motor Sales in Plymouth, Michigan listed a Dark Aqua metallic 1969 Mercury Cyclone CJ R Code with incredibly low miles. A side story says it was being driven around the Nashville suburbs by a little old grandmother. The Vanguard Motor Sales ad was just listed on Cars-On-Line.com with dozens of detailed photos. (Follow this link to view photos of the car and supporting documents.) The ad is so fresh that they haven’t even written the description yet. Stay tuned for a full test drive video and walk-around tour of this car in the coming week. The Deluxe Marti Report denotes it as being a one of one. It doesn’t get any better than that.

Of the 2,175 Cyclone CJ’s produced in 1969, only 260 had the R Code 428 Cobra Jet. Of those only 152 came with automatic transmissions, 5 had the Dark Aqua metallic paint, 4 had black knitted bucket seats, 3 had the GT Group equipment package and only one came with the 3.00 Traction-Lok rear axle. This is the one.

Among the photos provided on their ad page, Vanguard Motor Sales shows a partial build sheet, 1969 Mercury owner’s manual, the Deluxe Marti Report, the owner warranty card from Ford, and a portfolio of service records. They also have a photo of a Bill of Sale from 2008 when Wood Ford Sales in Trumann, Arizona purchased the Cyclone from the original owner’s family. The Bill of Sale states that the car had 6,480 actual miles after 39 years. In the 2008 internet ad, the family wrote that this car was used as a grocery getter in the Nashville suburbs. Garage kept, it had not been driven much for the last ten years. They described it as being mint at that time.

As the story goes, the rare Cyclone CJ was built at the Lorain plant on June 7, 1969. On June 12 it was purchased from Preston Motor Company in Nashville, Tennessee. It stayed in the buyer’s family until 2008 when it still had just 6,480 miles on the odometer.

The window sticker said the Cyclone CJ came with the 428 CJ with a four-barrel carburetor and Ram Air induction. It was rated at 335 horsepower at the factory (although historians believe they produced more like 400 hp.) It had the C6 Merc-O-Matic transmission, select shift, sports console and bucket seats. It was equipped with air conditioning, power steering, power front disc brakes, tinted glass and a factory tach. The chassis featured competition suspension with heavy duty springs and shocks and a larger front sway bar. The Traction-Lok rear axle had a 3.50 gear in the 9-inch nodular housing.The Ram Air induction meant it would have cast aluminum valve covers.

The fact that the Cyclone CJ was only produced one year makes it very desirable among muscle car collectors. It was produced by Mercury to compete with Mopars like the Plymouth Road Runner and Dodge Super Bee in the same price range. Yet far fewer Mercury Cyclone CJ’s were produced than Road Runners that year. Unless you were a Mercury collector you might have never known they existed.

History of the Mercury Cyclone CJ

For 1969, Mercury reduced the GT to an appearance package on the Comet. Yet an all-new fastback version returned in Cyclone form. The Cyclone CJ was one very hot looking performance car that flirted with the younger generation of car buyers. And it was more than just window dressing.

The ’69 Mercury Cyclone CJ was a one-year-only offering. It came with Ford’s big-block 428-cid/335-hp Cobra Jet V8 as one of its engine variants. There was a single chrome piece in the middle of the front valance, and a “Cyclone” legend engraved on it. Additional features included front and rear wheel opening moldings, a dual exhaust system, a 3.50:1 ratio rear axle,  an Air Induction hood and a competition-type handling package. A GT Appearance option group was an option with bucket seats for the Cyclone CJ at $149 extra.

It is true that the Cyclone CJ looked much like a standard Ford Torino. They could easily have been mistaken for each other at first glance. Looking closer, though, the prominent hood scoop and  hood tie-down pins made it pretty clear there was something serious lurking under the hood of the Cyclone CJ.  Back in the day some of the major automotive magazines recorded quarter-mile times under 14 seconds in Mercury’s 428 CJ fastback.

Although the Cyclone came from the Comet model variant of Mercury, it shared more with the Mercury Montego. The 116-inch-wheelbase and intermediate uni-body chassis was more Montego than Comet. And the chassis, some of the sheetmetal, glass and suspension parts were shared with Ford’s Torino. Original Ford parts are more available than harder-to-find Mercury parts. 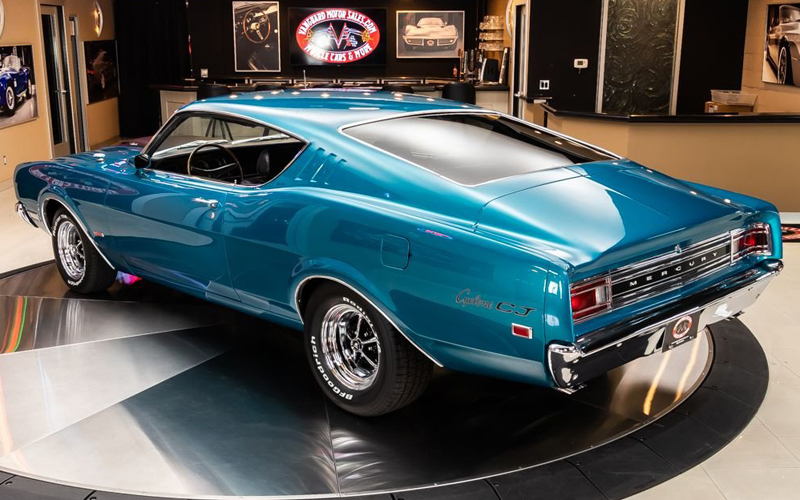