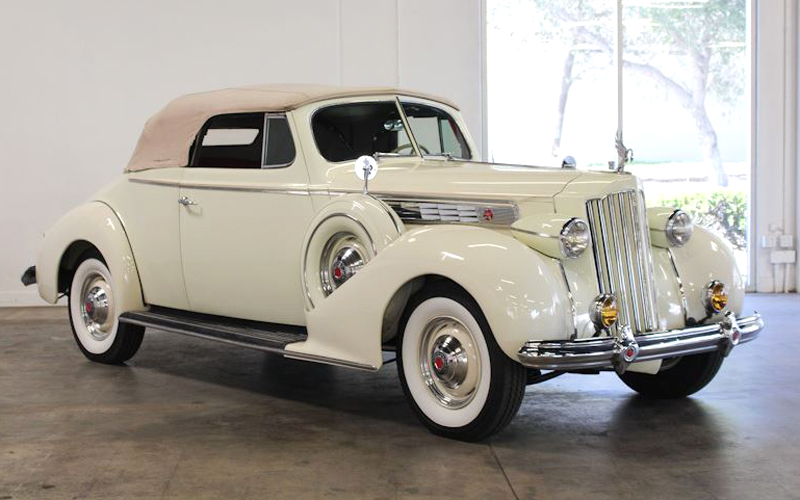 When Howard “Dutch” Darrin came to Hollywood in 1938, he built custom conversions of original American cars. Although his most famous design was on a Rolls-Royce Limousine, he was most prolific at custom conversions on Packards. His custom cars were so popular among the Hollywood movie star elite, that Packard Motor Car Company came calling to see what he was up to. As a result he began producing customized Packards, now commonly called Packard-Darrins, for Packard during the pre-war era.

This week, Specialty Sales Classics out of Fairfield, California listed a rare 1939 Packard 1703 Convertible Coupe, one of the famous Super Eight Packards of that era. The seller says some coachwork was done by Darrin of Paris, a shop Darrin owned and operated on Sunset Boulevard in Hollywood. (Find dozens of detailed photos at this link.) The custom coachwork is done on a 127-inch wheelbase. It has the look of the Packard Victorias which Darrin designed for Packard beginning in 1940. With a laser-straight body, fantastic chrome, trim, paint and accessories, this is perhaps the most pristine example you might find. The completely stock appearance is noted by Specialty Sales Classics in their ad description. They are offering it for sale this week in the Cars-On-Line Packard Section.

It presents in very nice condition. The cream exterior color reminds us of a Packard-Darrin Victoria that sold at an RM-Sotheby’s auction a few years back. The convertible top fits tightly and shows minimal wear. The gorgeous red leather interior also stands out virtually blemish free and the incredible hardwood dashboard with endless chrome inserts “also looks exceptional,” they say in their ad.

Click the video window below to hear it start and run:

Under the hood you will find a 130 horsepower, 320 ci straight-eight engine with a 9 main bearing crankshaft and a 3-speed manual column-shift transmission with overdrive. This incredible classic is still on the original 6-volt system updated to two in-series gel batteries and it is in tremendous physical condition throughout.

For 1939, Packard produced 3,962 examples of the Super Eight. As always, they were built to the highest standards and were one of the finest American cars of the pre-war era.

The Packard-Darrins were much more rare. Prior to 1940, it is thought that Darrin’s shop may have only produced about eight or nine Packard conversions. Only two were Super Eights with the rest being 120 models. Most of the cars he built were commisioned by celebrities.

Not all of the history on this one is known. More research needs to be done to find the true historic significance of this beautiful 1939 Packard 1703 Convertible Coupe.