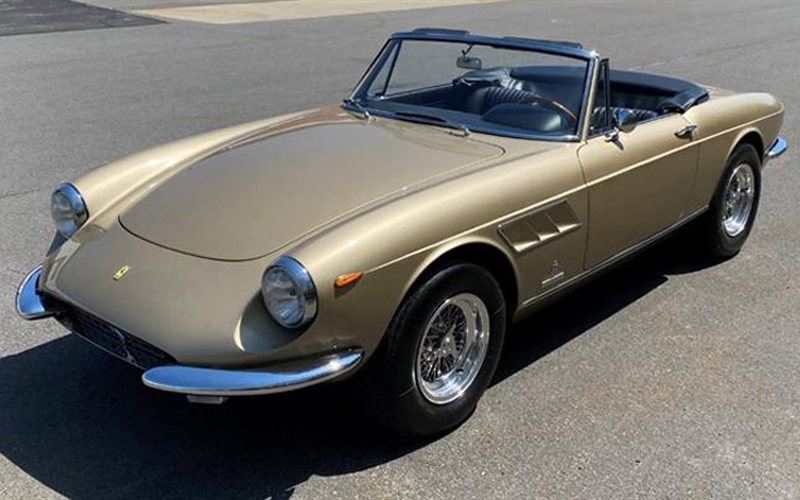 When it comes to classic Ferraris the 1960’s were rich with special built editions that were race bred but built for the street. These cars now command some of the highest prices imaginable at classic car auctions worldwide. Beauty, speed, exclusivity and pedigree all play a part in the way these cars are valued.

This 1967 Ferrari 330 GTS is a stunning matching numbers example being offered for sale by Gullwing Motor Cars in New York this week. (Follow this link to find more photos and contact information.) It was the 28th 330 GTS built out of only 100 from 1966 through 1968. It was a limited run, not unusual for Ferrari in the 1960’s.

The 300 GTS model was introduced at the Paris Salon in 1966. Its interior featured leather seats and electric windows as standard, with a radio, air conditioning and Borrani wire wheels as optional equipment.

Beneath the 330’s hood was the 4.0-liter, 300bhp Tipo 209/66 V12 engine, the one that the 330 GT 2+2 used. It has three Weber carburetors and a 5-speed manual transaxle. The brakes were vented Girling disc brakes on all fours to match the 4-wheel independent suspension with wishbones and coil springs. With a short wheelbase, about 2,400 mm, the chassis was constructed of tied main tubes in a steel spaceframe. The 330 GTS used a torque-tube style transmission.

The factory said the top speed was 150 miles per hour. When you consider the excellent handling, Ferrari was not wrong when it said the 300 GTS was the “world’s finest convertible two-seater.”

Originally finished in Grigio Fumo over Pelle Blue hides, chassis no. 9791 was ordered by Luigi Chinetti Motors of Greenwich, Connecticut and built for the American market. The engine number 9791 matches the chassis number.

Sparingly shown and driven throughout its life, the 50k miles indicated on the odometer are understood to be original. Gullwing Motor Cars says it is currently being offered with its owner’s handbook, tool roll, Ferrari Red Book, Massini report, and various records.

Although it was enjoyed as a driver for most of its early years, Chassis 9791 was shown at the 26th annual Ferrari Club of America National Meeting and Concours at Stouffer’s Pine Island Resort in Lake Lanier Island near Atlanta, Georgia in June of 1989 and again at the Rosso Rodeo Concours on Rodeo Drive in Beverly Hills in June of 1995. it remained unrestored and original residing in California. In September 2001 it changed hands with only 45,000 miles on the odometer. Shortly thereafter it went to Long Beach where it was treated to a three-year comprehensive restoration completed in 2004 in time to be shown at the Pebble Beach Concours.

In 2008 the Ferrari was sent to noted Ferrari guru Patrick Otis for mechanical work just ahead of Pebble Beach Concours 2008. In January 2012, the 330 was presented at the 21st Palm Beach Cavallino Classic where it won the Gold Award. While Gold is good, Platinum is better, so over the course of the year 9791 was stripped bare, repainted Oro Chiaro, and the issues that kept it from top honors were rectified. It was during this time that the Ferrari Classiche Certification was received with the ever-desirable Red Book arriving in October of 2012.

Returning to the Breakers for the 22nd Cavallino Classic in 2013, victory was achieved when the Ferrari 330 GTS brought home the Platinum Award.

Fresh from its big victory in Florida, 9791 was displayed at the 29th Annual Reading Ferrari Concours d’Elegance in May of 2013 where it was awarded the Francesco Baracca Award (Ferrari of Exceptional Merit).

Sleek and powerful, this Platinum Award winning 330 GTS is the ideal motorcar for any number of exciting events. The status it brings will be a complement to any top collection.

History of the Ferrari 330 GTS

The Ferrari 330 GTS was a luxury sports car that was fast but handled the road in comfort and style. It was of course designed by Pininfarina, unsurpassed in styling. The Gran Turismo 330’s were V12 Ferraris built in various configurations; 2+2 GT Coupé, two-seat Berlinetta, spider, and race cars extraordinaire. They were produced from 1963 through 1968. The name “330” describes the displacement each cylinder produced in cubic centimeters.

All 330 models used variations of the Columbo V12 engine. The 4.0 liter motor evolved with wider bore and an alternator instead of a generator.

The 330’s were significant because they were a more refined version of the earlier 275 model Ferraris. Quieter and with better road manners, it was one of the first Ferraris in which you could actually hear a radio.

The 300 GTC was introduced first in 1966 at the Geneva Motor Show, while the 300 GTS came along later in 1966 introduced at the Paris Motor Show. About 600 GTC’s and about 100 GTS spiders were produced altogether.