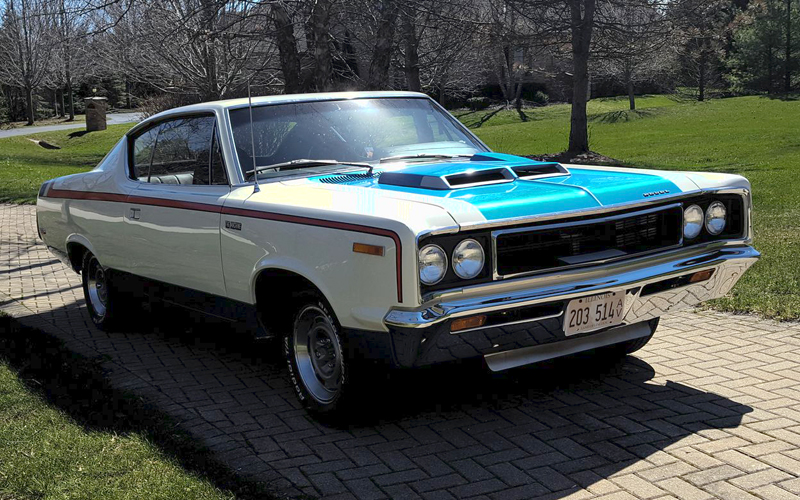 It was the first time anyone had seen American Motor’s fastest muscle car of all time. AMC called it The Rebel Machine, and Hurst Performance would give it a great sendoff at the NHRA World Drag Racing Finals in Dallas, Texas in 1969. Linda Vaughn and her Hurst Girls entourage were on hand to liven the atmosphere. With dragsters revving in the back ground, AMC was premiering their next great muscle car. Its debut in a year when Chevelles, Challengers and Cudas were getting all the press, paid tribute to the group of engineers at the Kenosha, Wisconain plant that were diehard muscle car fans.

This week, a rare Rebel Machine was listed for sale by a private party seller from Illinois. It is one of 1,000 or so Rebel Machines done in the Red, White and Blue racing livery much like the SC/Rambler that came out a year earlier. (Follow this link to view dozens of detailed photos.) It has the 390 ci V8 engine and a very desirable 4-speed Borg Warner T-10 that was race prepped by Hurst Performance. Both are thought to be orignal to this car. They say it was fully restored in 2011 from a rust-free New Mexico body.  You rarely see one of these for sale. The seller notes that it has had minimal miles since the restoration and is in excellent condition.

The Rebel Machine was the result of a collaboration between Hurst Performance and the AMC factory gear heads in Kenosha. They were chomping at the bit to produce a world class drag racing car that could hold up to what GM, Ford and Chrysler were making. Their dealers knew the value of having a top performance car in their showroom. Having a Rebel Machine in your showroom would help you sell cars.

The first 1,000 Rebel Machines produced by AMC in 1970 were painted in the company’s race-inspired red, white and blue color scheme. This 1970 AMC Rebel Machine is one of them. It comes with American Motor’s most powerful motor, the 390 ci V8. It came from the factory with special heads, valves, cam and a 690 cfm 4-barrel carburetor.

The Rebel Machine featured here spent its early years in Texas and New Mexico. The seller says it was virtually rust free prior to the restoration. In the early 2000’s, a family with strong AMC ties acquired the car and restored it. Their attention to detail is evidenced everywhere on the car.

Just for The Rebel Machine, the 390 engine’s top end was tweaked to produce 340 horsepower and 430 foot-pounds of torque–the most ever on an AMC street legal car. It had 10.0:1 compression requiring high octane fuel.  It eclipsed the AMC AMX top output by 15 horsepower. In addition to the same camshaft and compression as the AMX, The Rebel Machine had the same forged connecting rods and crank as the AMX. But then they added a high-flow dual-plane intake, dog-leg port heads, and larger 2¼-inch-outlet exhaust manifolds. A letter Y in the VIN identified the 340-hp engine. This was the most powerful engine AMC would ever offer in a regular production vehicle.

The cylinder heads, cam, valvetrain, intake and exhaust system were all reworked. It had the same transmission and rear end as the S/C Rambler, with the venerable BorgWarner T-10 four-speed manual and optional “Twin Grip” differential available in either 3.54:1 or 3.90:1 final drive ratios.

Trim features included correct “The Machine” branding on the trunk lid, dash board and both front quarter panels. The hood came with a functional scoop, with a tachometer housed in the back part of the scoop.

According to the registry, a total of 2,326 Rebel Machines were produced by AMC at the Kenosha, Wisconsin plant. It is estimated that over half of the wore the red, white and blue race livery. 1970 is the only year the Rebel Machine was produced.

Find more AMC Muscle Cars when you scroll through the list in Cars-On-Line’s AMC Section online.

2 Responses to The Rebel Machine Comes of Age