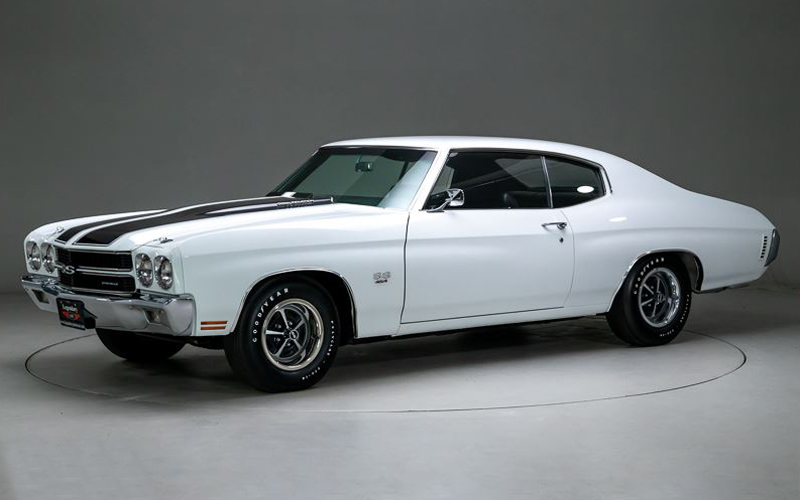 When GM decided to lift its ban on big block motors in its mid-size cars, it unleashed its greatest muscle car of all time, the 1970 Chevelle SS LS6 454 with 450 horsepower. Yep, you could buy one right out of the showroom. Anyone could order the LS6 454. Chevrolet now had the biggest Big Block in an already crowded muscle car market. At the time the adage was … “There’s no replacement for displacement.” The more cubic inches the better.

One of the most famous Chevrolet dealerships in the midwest was Berger Chevrolet in Grand Rapids, Michigan. Their shop would race prep cars for weekend warriors. That’s where this 1970 Chevelle SS LS6 454 came from. This same car is now being offered for sale by Legendary Motorcar Company, one of today’s premier muscle car restoration shops. They say this very rare Chevelle has benefited from a frame off restoration. (Click here to review dozens of detailed photos. Make sure to view the undercarriage photos to see the reproduced factory markings.) Its Classic White paint has been wet sanded and polished to a high luster finish. The undercarriage and engine bay have been well detailed with chalk markings, stickers and tags. It even comes with two build sheets.

As advertised back in the day, the big block motor produced 450 brake horsepower at 5,600 rpm and 500 foot-pounds of torque at 3,600 rpm. That was as good as it got for performance numbers in the muscle car era. The GM factory rating of 450 horsepower comes thanks to an 11.25:1 compression ratio, solid lifter camshaft and big port heads.

Keep in mind this was a factory option that anybody could walk in and order from your friendly Chevrolet dealer for just an extra $263.30 on the window sticker. Some 4,475 buyers made that choice and were rewarded with higher insurance premiums to go along with the high performance. In fact, the car was rumored to produce 500 brake horsepower, but the factory claimed 450 in the interest of lower insurance. Still, it was the highest horsepower rating of any factory built car at the time.

It takes a stout transmission to manage that much power so this one came with the heavy duty Muncie M22 Rock Crusher 4-speed manual transmission.

No production engine ever had a higher factory horsepower rating. It created over 500 foot-pounds of torque. Factory LS6 Chevelles were known to do sub 14 second ET’s at over 100 mph. Tested by Super Stock and Drag Illustrated Magazine in 1969 and 1970, the solid lifter LS6 Chevelle ran a faster quarter-mile than a Hemi Road Runner by a little over one-tenth of a second. Was one faster than the other? That depends on the driver. But tests by Car Craft and Hot Rod Magazine prove that the Chevelle LS6 was very much at the same level as the Hemi Mopars.

In early 1970, Hot Rod magazine tested a Chevelle SS LS6 very much like this one and pulled off mid-13 second quarter mile ETs on the stock biasply tires, a remarkable feat considering how much torque the Wide Ovals had to endure.

The new Chevelle for 1970 ran on a 112-inch wheelbase with a wider track and big polyglas tires. That meant it could handle almost like a Camaro and accelerate like a rocket. With the big cowl induction hood, it could breath better than a standard muscle car. You’ll know the sound of an LS6 Chevelle 454 when you hear one.

Chevrolet first introduced the intermediate-size Chevelle in 1964, and it became an immediate sales success. The popular car was just what America wanted, as Chevrolet sold over 440,000 of them in 1970. Ads told us that the Chevelle’s “performance starts as soon as you’re seated.”

The 1970 Chevrolet Chevelle LS6 was one of the greatest muscle cars of the period and greatest of all time. This one in particular is an investment grade collectible because it has benefited from a frame off restoration.